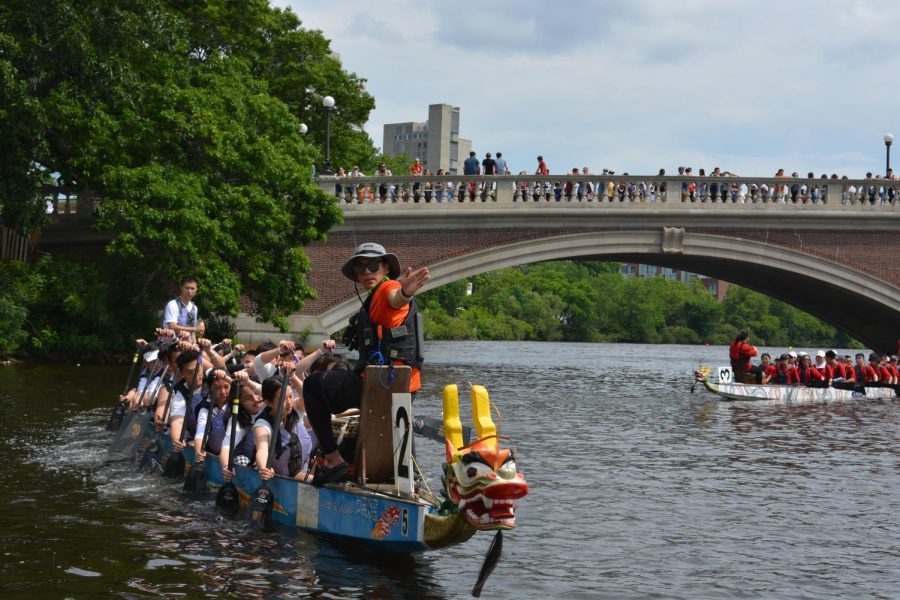 After a two-year hiatus from an in-person event, the Boston Hong Kong Dragon Boat Festival returned to Cambridge with a whole-day program of culture, food and festivities Sunday for its 43rd celebration.

The day’s program featured Asian cuisine served from food trucks, dragon boaters racing from the docks and an elevated stage for cultural performances, including a taekwondo demonstration, Indian dance and a Sichuan opera, Bian Lian.

Under a tent of cultural arts and crafts stationed behind the stage, festival-goers practiced Chinese calligraphy, patiently played rounds of Go and folded intricate origami.

Gail Wang, president of the Boston Hong Kong Dragon Boat Festival, said she was excited to see the year-long planning come to life for the day. Entering her second decade involved in the festival, Wang said her efforts represent a larger symbol of hard work.

“As a Chinese immigrant, having this event and working to showcase Asian culture, particularly a festival based on Chinese tradition, it’s very moving, meaningful and personal. But at the same time, this is also a really important opportunity to unite and work with Asian cultural groups in the New England area,” Wang said.

Attendee Amy Wu grew up in the Midwest, where her neighborhood is predominantly white. As a Chinese American, this year’s festival “does make me feel more connected to my heritage.”

“It’s really nice to see events put on by Asian Americans over here as a means of getting in touch with their culture, no matter where they are in the world,” Wu said.

Since 1979, the Boston Dragon Boat Festival was the first dragon boat festival in the U.S., and Wang said the committee has held its annual, volunteer-run celebration on the Charles, except for 2003 when SARS was rampant and 2020 when Covid-19 first struck the world. In 2021, a condensed, virtual version of the dragon boat festival was held.

Dragon boat racers were able to sign up for the race in early spring. Slots came first come first serve, and quickly filled up, Wang said. Teams from across the country and Canada have flooded the signup sheet.

Michelle Leung is one of the dragon boat racers. This year, she is also part of the Dragon Boat Festival Committee staff and said she felt lucky to be part of the day’s festivities.

“I’m really just excited for the races in general, the vibe, the guests, just the festival in its entirety and seeing all these boats come back from the pandemic,” Leung said.

Leung started dragon boat racing prior to the pandemic by an invite from a team member.

“I have friends and family friends who were already involved who are part of the team. And every year, there’s different people. They were recruiting, like, ‘Oh, we haven’t seen you in a while. Do you want to hop on this boat?’ And I went, ‘Say less. I’m there. Let me get in.'”

Leung said the range of activities throughout the day had invigorated attendees, racers, performers and even those passing by.

“It definitely brings out Chinese culture…It feels like we’re here as a community,” he said. “[It just brings] everyone together, and other people to come down to see what the drums are for … and then, they get to see what the dragon boat festival is like in our culture.”