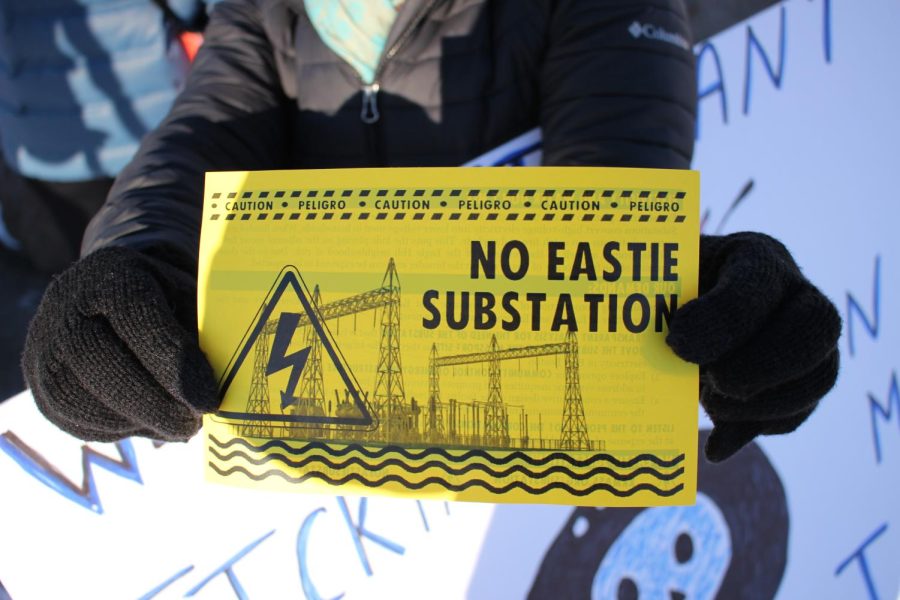 A protester holds a "No Eastie Substation" flyer at a protest on Condor Street Urban Wild in Chelsea, Mass. on Sunday, Jan. 31.

Initially proposed in 2013, Massachusetts’ Executive Office of Energy and Environmental Affairs (EEA) issued final approval for the Eversource project in Feb. 2021. Nine months later, voters in the city were asked to voice their opinion on the substation with a non-binding question on the Nov. 2, 2021 municipal election ballot. Polls showed that nearly 84% of voters opposed the project in favor of moving it to a non-residential area nearby, such as a Massport-owned property next to the airport.

The protest follows recent news that the Conservation Law Foundation (CLF) will support environmental advocacy groups in their fight against the substation by filing an appeal to the EEA requesting that the department revoke Eversource’s construction permit. The CLF argues that this project should not be built along the creek and violates Chapter 91, a state law that protects Bay Staters’ access to the waterfront and ensures that coastal construction is safe.

The tentative Eastie Substation would be located on Condor Street next to Chelsea Creek, on an empty lot that borders a busy playground and the creek’s waterfront, only 300 feet away from an 8 million gallon tank of Massport jet fuel for Boston’s Logan Airport. Activists argue that a high-voltage substation at this location poses a significant safety risk to families in the area.

John Walkey serves as the Director of Waterfront and Climate Justice Initiatives at GreenRoots and has opposed Eversource’s substation project since it was proposed nine years ago. His organization believes the decision to build a substation in East Boston is not a sound one from a climate point of view.

“It’s putting in a high voltage electrical substation right on the waterfront, in a property that’s landfill has flooded in the past. The area is a flood zone,” said Walkey at the protest. “It also happens to be right next door to a heavily used playground and a densely packed residential neighborhood of primarily low-income folks and immigrants.”

Activists at GreenRoots, Walkey added, fear the risk of an explosion at the substation and the potentially disastrous impact it would have on the neighborhood. For Extinction Rebellion Boston, this is also a primary concern, leading the organization to adopt the phrase “Electricity and Water Don’t Mix” as the slogan for their campaign.

Residents and activists expressed worry over the industrial pollution that the substation would bring to East Boston and the negative impact on the area’s landscape and environment.

“There’s a lot of industry already here, and people already have to put up with a lot of impacts on the environment, on their health, on their wellbeing,” said Walkey. “To just have another one tossed at them just is not fair and is not right.”

For some protesters, the problem lies not only with the safety of the substation itself but also with how major electric projects like this become approved in the first place. Cindy Luppi, a Winthrop resident and the New England Director for Clean Water Action, stresses the importance of including community voices in energy planning discussions.

“There’s legislation that’s pending at the State House this year that will revise the process by which these facilities get located in neighborhoods so that more of the neighborhood perspective is centered, and so that there actually have to be conversations in the predominant language of the neighborhood, ” Luppi said at the Sunday protest, referring to siting reform Bill HD3679, which was filed in February 2021.

If passed, HD3679 will require applicants in energy construction projects to formally consider the interests of and impact on environmental justice communities nearby.

“That’s one of our big concerns here,” said Luppi, “that there is very poor public process, especially for immigrants and Spanish-speaking neighborhoods, who barely knew that it was going on.”

The fight against the Eastie Substation is nothing new for the activists at Sunday’s event. In Aug. 2021, members of Extinction Rebellion Boston staged a theatrical demonstration by blocking the entrance to the EEA office on Cambridge Street with a pink bathtub. At the protest, an activist dressed as an Eversource employee threw a toaster into the bathtub, which the Extinction Rebellion website says symbolizes “what Eversource is doing to our local East Boston community.”

Politicians have also opposed the substation, including former acting Mayor Kim Janey. She said the project was “based on flawed projections and flawed priorities” in a statement for the City of Boston.

Going forward, the protest organizers said they would continue to oppose the substation with community protests and a series of legal actions.

“We are not against reliable electricity,” says Walkey. “However, investing in our electrical infrastructure in the same way that we invested in it a hundred years ago doesn’t make sense. We can do this better.”