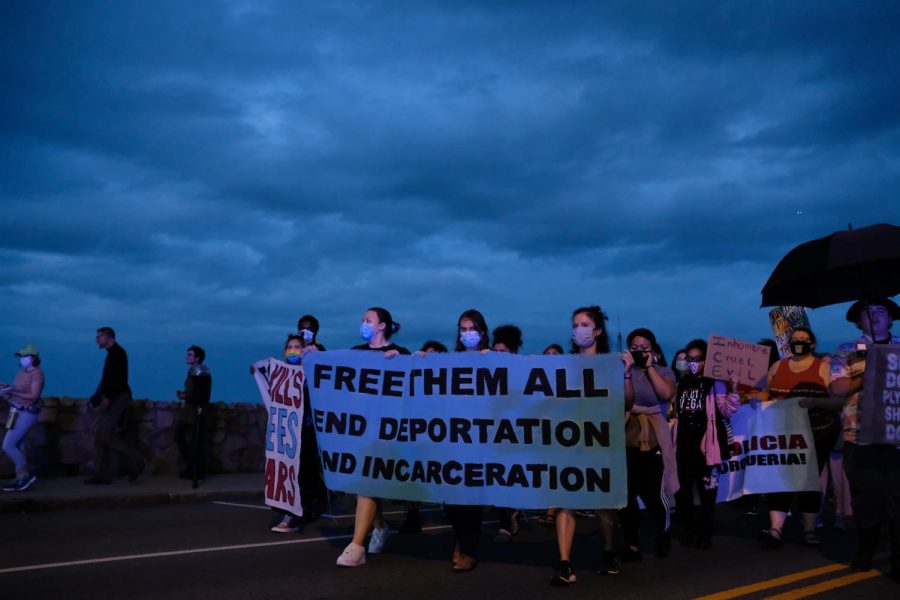 Four immigrant justice organizations have detailed how immigrant detainees at the Plymouth County Correctional Facility face “patterns of mistreatment” — including lack of appropriate and timely medical services, physical abuse, discriminatory language, retaliation against individuals who voice grievances and barriers to outside communication and legal support.

The groups —  Prisoners’ Legal Services of Massachusetts, Boston Immigration Justice Accompaniment Network (BIJAN), AMOR and Never Again Action Boston — summarized their findings in a letter to the Plymouth Sheriff’s office, which runs the facility, and the federal Immigrant and Customs Enforcement field office in Boston. More than 60 other nonprofits, churches and community groups have signed on.

Plymouth County Correctional Facility, which holds between 100 to 200 immigrants at any given time through a “bed contract” with ICE, is the sole remaining ICE detention facility in Massachusetts. The “All Eyes on Plymouth” letter calls for an end to this contract, which can be terminated at any time, and the detainees’ immediate release. It was sent in September and neither the Sheriff nor ICE responded.

“I lost my dignity being detained by ICE,” said Marco Battistotti in an interview with the Scope.

Battistotti, an Italian immigrant, was detained at Plymouth jail from September 2020 to December 2020 and was one of dozens who received support from Prisoners’ Legal Services. He was transferred to Plymouth from Bristol’s jail after a similar public outcry led to the termination of its contract with ICE.

In a series of notarized documents sent to PLS, Battistotti described medical neglect, intimidation, placement in segregation, voyeurism by an officer while showering and denial of access to his attorney.

John Birtwell, a spokesperson at the Plymouth County Sheriff’s Department, defended treatment of the detainees and said the facility was run in a professional manner.

“We are a clean, modern, safe facility with access to 24 hour medical care, on premises or nearby,” he said in an email exchange with the concerned South Shore contingent of Unitarian Universalist Mass Action.

An unnamed spokesperson from Boston ICE Enforcement and Removal Operations echoed Birtwell’s statement in an email to the Scope — “ERO’s Detention Standards Compliance Unit ensures that detainees in ICE custody reside in safe, secure and humane environments and under appropriate conditions of confinement.”

Birtwell said allegations against Plymouth County Correctional Facility were “untrue, with the intention of some to mislead and malign our staff and department.” He has been with the department since 2005 and visits the facility several times a week.

“For more than 20 years, we have successfully passed regular and frequent inspections by federal, state and local auditors and often with perfect scores for cleanliness and care,” said Birtwell.

He did not comment specifically on the letter’s concerns that “inspections of ICE detention conditions are ineffective at identifying pervasive and troubling conditions in detention at PCCF.”

For example, the All Eyes on Plymouth letter alleges that the facility makes adjustments in advance of an inspection, such as cleaning in a manner that is not typical. “Moreover, detained immigrants report being threatened by correctional staff to not report conditions that would reflect poorly upon PCCF,” the letter says.

Communication with lawyers and support networks is one of the main challenges cited in the letter. The letter states that “some detained individuals…experience having phone numbers for family members or support networks blocked without reason.” It also states that “attorneys cannot initiate a phone call with their clients and must try to schedule phone calls in advance, even in circumstances where timely information is needed.

Battistotti alleged that his request for a legal call was denied when he was placed in segregation following an altercation about a broken typewriter. He had been using the typewriter regularly to document his grievances, and one day, after finding that it was not working, he made multiple reports to guards. He was ultimately accused of breaking it himself, and handcuffed and taken away.

“People should still have their basic rights even when locked up,” said Kayode, a former detainee from Nigeria who requested that their full name not be published for safety concerns. Kayode received legal support from the PAIR Project and was released from Plymouth County Correctional Facility on bond in June of 2020. “There’s nobody that checks them [the guards], or checks their power.”

The letter reports “irregular and deficient COVID-19 protocols,” such as correctional officers “habitually avoid[ing] wearing masks” and “newly-arrived individuals…not being tested or offered a vaccine upon entry.” COVID-19 protocols were of particular concern to Kayode’s lawyer, due to his vulnerability to severe illness from COVID-19 and an exposure to someone in the facility who tested positive.

Immigrants at Plymouth jail are from a range of countries, some having entered the U.S. without documentation or having fallen out of status. They were either picked up directly by ICE on the streets of Massachusetts, handed over to ICE by local law enforcement or transferred from other facilities, sometimes out of state.

For Mario Paredes, an attorney at Prisoners’ Legal Services, the concern is not just how a facility is managed — he feels there’s something systemic at play. For him, the campaign is part of a larger conversation to “end partnerships between states and immigration.”

“Our goal is for Massachusetts to not be involved in the detention of immigrants,” said Paredes, “… because there are various community-based programs … that can serve the same purpose without subjecting folks to incarceration.”

Elizabeth Nguyen, a BIJAN volunteer, believes that no matter the conditions in an ICE facility, there can never be “a cage that is humane.”

“I feel like my job as an organizer is to fight for the thing that our people actually need and deserve,” she said, “…to really follow the lead of folks inside, who have repeatedly called…for their freedom.”

While either party, Plymouth jail or ICE, can terminate the “bed contract,” Birtwell explained that the fate of the detainees is out of the hands of the Sheriff’s department. “DOJ and … [ICE] … decide where to send someone, how long they remain, and when they leave – not us.” According to the contract, the jail can ask for the removal of individuals in some instances; it cannot unilaterally release them or determine where they go.

With the exception of those under “mandatory detention,” said Paredes, ICE has full discretion to release detainees – on their own recognizance, on orders of supervision (with home visits, court tracking and/or electronic surveillance), on parole or with a monetary bond. Under certain discretion, Paredes said, those under mandatory detention can also be released in instances related to ongoing health concerns or Covid litigation.

If All Eyes on Plymouth succeeds in getting Plymouth jail and ICE to terminate its contract, the campaign is prepared to “hold them accountable,” said Nguyen, and make sure detainees are not simply transferred elsewhere.

Birtwell stressed that his office is always open for feedback. “As a public office and facility, our department welcome[s] input from citizens,” he said in an email to The Scope. Sheriff Joseph D. McDonald, Jr. has not granted Unitarian Universalist Mass Action’s repeated request for a meeting, but Birtwell has agreed to an exchange over email or phone.

In November, the campaign escalated with a “Twitter storm” using the hashtag #AllEyesonPlymouth, plastering social media with mentions of the Sheriff and ICE. The groups are still fighting for the freedom of everyone in Plymouth.

“I hope … we keep on doing this,” said Kayode. “People need to know what’s going on in there.”

Correction: A sentence was added to clarify that those on mandatory detention do also have the opportunity for release under certain discretion, mostly related to health safety. The previous version made it seem as if  release is completely non-applicable to this population.