New show in Cambridge will amplify underrepresented voices in science 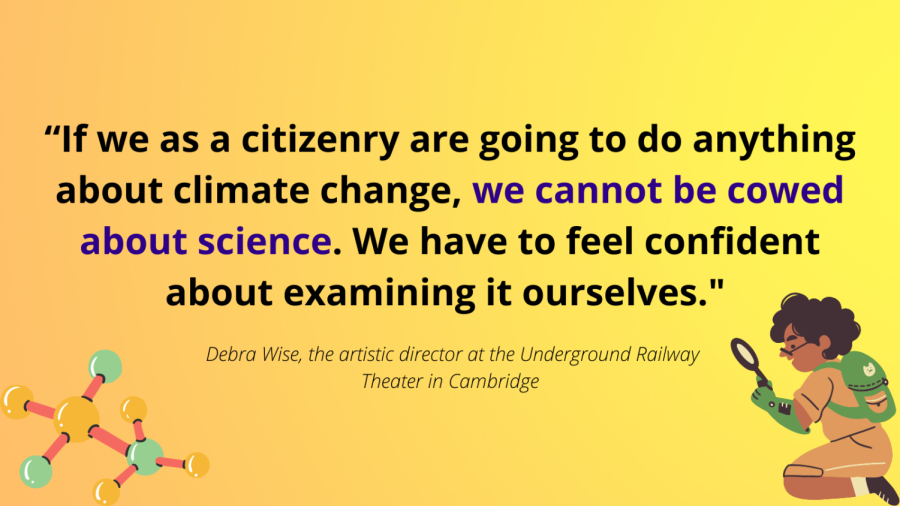 Quote from Debra Wise of the Underground Railway Theater

Science is a profession perceived to be free of bias, but findings have ultimately been limited due to racial uniformity in the lab. A new play aims to raise awareness of diversity issues in science.

The Pew Research Center found in 2019 that while white workers comprised 67% of the workforce in STEM, Hispanic people made up just 8% and Black people 9%. Experts say that as science continues to be conducted by racially homogenous groups, findings will fail to address questions that pertain to diverse populations.

The upcoming show at the Central Square Theater in Cambridge called “Young Nerds of Color” will showcase narratives of underrepresented scientists. After five years of research and forethought, the team is thrilled to finally present their production that delves into scientists’ challenges, successes and dreams.

“Expect amazing jazz music, thoughtful, fascinating BIPOC [Black, Indigenous and people of color] excellence in the sciences, an introduction to people who are so smart and interesting, and a visually stunning production,” said Melinda Lopez, playwright of the show and professor at Northeastern University.

The play was inspired by a conversation Lopez had with Debra Wise, artistic director at the Underground Railway Theater, and Brandon Obgunu, an epidemiologist at Yale. They realized they could not think of enough theatrical productions that featured scientists of color, so they set out to change this.

The team at the theater then made calls for interviews and spoke to over 60 different scientists who identify as people of color. The scientists discussed their passions, aspirations and struggles, like being the only person of their race in the room. Characters in the play describe how their racial background shapes the path of their lives. Complications with documentation, finances and racism dictate the opportunities available to those who hope to go to college, earn a degree and attain a job. The people of color who go to college then often feel the burdensome pressure of representing their race.

Despite the coronavirus lockdown, research for the play continued. The team conducted Zoom meetings as the director of the show, Dawn Simmons, worked to maintain the progress that was being made and as the team worked to understand the voices they planned to portray on stage.

Virtual interviews were conducted, and scientists were reinterviewed following the murder of George Floyd and the shooting in Atlanta to gauge the interviewees’ feelings on their identities and any shift that might have occurred in their thinking.

“This is one of those plays that’s really an attempt to address the moment, so we had to keep in the moment,” said Wise.

Initially, Lopez planned for the play to consist of fictional characters based on the scientists, but the interviews were so memorable that she found that there was no need to fabricate dialogue.

“The interviews were so riveting that I decided at some point to just work from the text of just what people said,” Lopez said. “So we’ve crafted a show that really uses all their words.”

Using the raw content of the interviews, the team compiled quotes to write a veracious production that articulated issues for scientists of color that have been dismissed and never presented on stage. The characters describe presumptions driven by racist rationale. They sense dissonance between their work and expectations, as American society perceives irony in a Black person who is exceptional at solving physics problems. The show also exposes stories of bigoted teachers, biased workplaces and the intelligence of scientists of color being ignored.

Readings of the working script engendered feedback that confirmed that underrepresentation in science is communicated in the show. Lopez recounts a scientist calling “Young Nerds of Color” “the anti-gaslighting play.”

Many of the interviewees responded to the perception of science being an impartial occupation, explaining that it is false. Systematic racism in the field dictates what is published and who has the resources to conduct research, causing scientists of such privileges to have the most influence on the findings that are presented.

“They’re going to have a particular view on research they’re doing. And that is limiting science,” said Lopez.

Des Bennett, a key communicator between members of the team as dramaturge of the show, discussed the proverbial covert graveyard comprising scientists of color’s discoveries that exists behind the scenes at predominantly white scientific institutions. These findings are obscured by biases that control who is heard in the scientific world. This show has the potential to elucidate to white scientists the barriers in the lab working against their colleagues of color.

“The invisible forces, which is a title line of one of the sections of the show … are at play for their coworkers and they can disrupt that in order to gain more equality in the field,” Bennett said.

The team at the Central Square Theater knows that “Young Nerds of Color” has much to offer. It is a celebration of science and unknown struggles and successes in the field. It will also include an original jazz score produced by a team of musicians and composers led by Nona Hendryx, a professor at Berklee College of Music. The harmony of the music will parallel the harmony of combined mindful thinking and voices in a science lab. One of Bennett’s interviewees described the musicality of science, as scientists can work together to reach a finished product, like the multiplicity of different instruments and sounds that play into a musical piece.

Hendryx continues to compose and revise the music for the play as she picks up on refrains from the current script and creates a repertoire of songs from them. The text, too, will do some shifting as it is infused with music.

“This music is going to add many dimensions to the show as it kind of lifts everything into this magical and theatrical place,” Wise said.

The theater coalesces elements of art and science to make a show that is interdisciplinary. “Young Nerds of Color” will remind the audience of the resemblance between fields that are often considered to be contradictory.

“They’re not separate and they never really have been,” Bennett said. “Science in itself is a creative practice. You have to be creative to be a good scientist.”

Lopez believes that art is an experiment, so she is unsure of what exactly the audience will gain from the show. However, she is certain that any nerds of color watching will be happy with the show.

“They will feel represented on stage,” she said.

In April 2021, the draft of the play was shared at the festival, but the event had limitations as it was completed on Zoom. The show demands movement, music and an immersive scenic design, all of which could not be fully executed through the computer screens of the team members. Still, they used the event to ensure the clarity of the script as well as its applicability to several audiences. The event also yielded a new interview with a scientist of color that will be present in the upcoming show.

“The biggest difference between the Zoom workshop presentation and the upcoming production run in February 2022 is that we will be live on-stage and in-person for the first time with a newly revised script,” Bennett said.

The team at the theater also had a two-day workshop on Nov. 20, 2021 and Nov. 21, 2021. This was the only time a workshop for the show had been in person. They were accompanied by a scenic designer, properties designer and Hendryx and her team to develop musical and physical elements that would generate the world that they envision for the show – a liminal place between a jazz club, a lab, a theater and a night sky.

Rehearsals for the show will start on Jan. 11, 2022, leading up to the first performance on Feb. 3. It will be the theater’s biggest show since all theaters in the city reopened. “Young Nerds of Color” will run for five weeks.

As a product of the collaboration of Underground Railway Theater and The Nora, the Central Square Theater has produced award-winning productions that work to broaden perspectives on stage and demystify science for all.

“If we as a citizenry are going to do anything about climate change, we cannot be cowed about science,” Wise said. “We have to feel confident about examining it ourselves.”

While “Young Nerds of Color” will be able to point out diverse viewpoints, the team thinks it might also illuminate commonalities within the general human condition.

“I’m hoping that audiences are able to understand that science and wonder can be a part of anyone’s life,” Bennett said.