“Stealthing” bills across the nation prove legislation leads to education

Legislatures across Massachusetts have stressed the importance of stealthing bills and implications regarding consent. 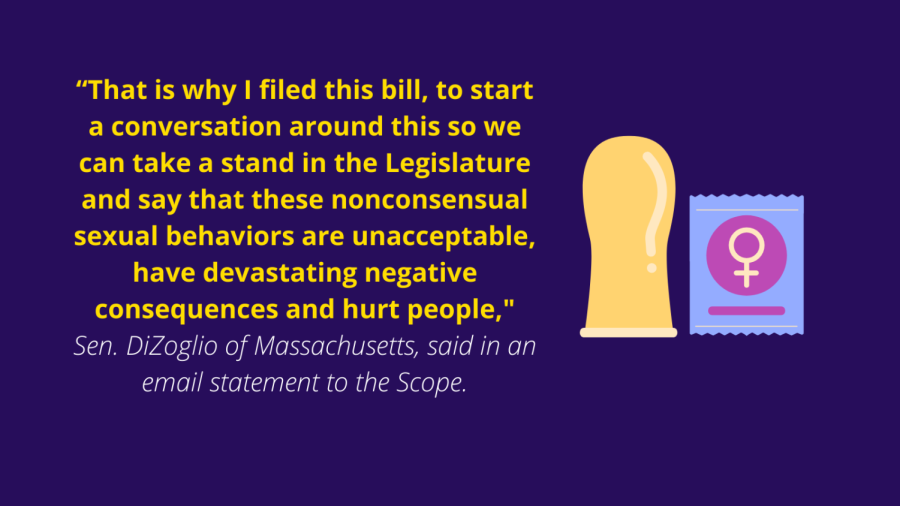 Legislatures across the nation, including Massachusetts and New Jersey, continue to advocate for bills outlawing the act of “stealthing,” the nonconsensual removal of a condom during intercourse, prompting widespread education in those states and elsewhere about consent.

Nonconsensual condom removal can lead to pregnancy, sexually transmitted infections and sexually transmitted diseases. The reality of this form of assault was brought to the public by Alexandra Brodsky, a staff attorney at Public Justice, in a paper published in 2017 in the Columbia Journal of Gender and Law. The effect – which began around the start of the #MeToo movement – was to popularize the conversation around “stealthing” and prompt legislatures to propose bills.

Davis has conducted research on the nonconsensual removal of a condom, publishing studies in 2019 regarding young women’s and young men’s experiences with sexual risk behavior, including “stealthing.”

“This is a ‘rape adjacent’ and I think that is an apt term,” Davis said, referencing a term coined by Brodsky. “It’s different than rape in some ways, as in the person was agreeing to some sort of sex, but it is similar in that it was a particular sex act that was not consented to.”

Davis’ research concluded that 12% of women have been the victim of the nonconsensual removal of a condom, while 10% of men have reported removing their condom without consent.

“My guess is these rates are an underestimate, not an overestimate,” Davis said, noting that “stealthing” is often unbeknownst to the victim, thus skewing the data.

Legislatures across Massachusetts have stressed the importance of these bills and their implications regarding consent. Experts have agreed that “stealthing” bills will be most beneficial in furthering conversations about the matter.

“This is an important issue that deserves attention and discussion from legislators,” Sen. DiZoglio, the senator from Massachusetts, said in an email statement to the Scope. “That is why I filed this bill, to start a conversation around this so we can take a stand in the Legislature and say that these nonconsensual sexual behaviors are unacceptable, have devastating negative consequences and hurt people.”

“I think there is always education that needs to be done; filing this bill hopefully means we are having more conversations about this and talking to our young people about this issue,” Ramcharan said. “We’re failing our young people if we’re not teaching them how to have these healthy relationships.”

Jane Doe Inc. has not taken a formal stance on the Massachusetts bill. It has not been approached by its policy committee or the Legislature regarding this issue.

Davis stressed the mental and physical health damages that could result from nonconsensual condom removal, noting that sexual assault victims may feel betrayed. Moreover, since victims may not be aware that condom removal has occurred, they might miss the chance to take Plan B or post-exposure prophylaxis in the necessary time frame.

To confront those realities, “stealthing” bills allow victims to claim damages. The California law, for example, provides for civil penalties including monetary compensation for mental or physical anguish that may occur, differing from previous failed bills that advocated for criminal and civil penalties. By ensuring that the Massachusetts’ bill H. 1667 provides only civil penalties, Rep. Howard hopes this will pass.

Some experts have cautioned against stringent legal consequences and voiced concerns about passing criminal legislation.

“Something that we hear constantly is people don’t always want to see the person who caused them harm [to be] criminalized,” Ramcharan said. “There’s always this concern that if we increase these penalties and increase in crime, survivors may not report.”

According to Rep. Howard, “stealthing” bills will give way for police investigations into these allegations. While the legal repercussions will vary from state to state, in California, “stealthing” has been defined as sexual battery and makes the person who committed the act responsible for damages and financial support for related expenses.

Attorney Stephanie Sousa, who practices in Massachusetts and has experience with sexual assault cases, explained that she believes these situations will be handled on an individual basis, and suggested that because the sexual act itself was consented to, she is unsure if there will be criminal penalties.

In the event that neither partner could be impregnated, the legal implications remain the same. “It’s just the sanctity of your body,” said Los Angeles Attorney Keith Davidson, founder of KDM Law, who has represented clients in sexual assault cases, explaining that an individual should have a choice over their own body.

According to experts, now that California’s “stealthing” bill is enacted, it will work to further the narrative around nonconsensual condom removal and is likely to lead to similar bills under consideration across the nation. As there is limited research conducted on “stealthing,” Davis hopes that this will lead to more quantitative research.

By having these educational conversations, Ramcharan said, “We will begin to shift that narrative and cultural norm.”