With a lack of official dog parks in Boston and growing tension between dog owners and non-dog owners at public parks, Friends of JP Dog Parks advocates for a solution for furry friends and their owners. 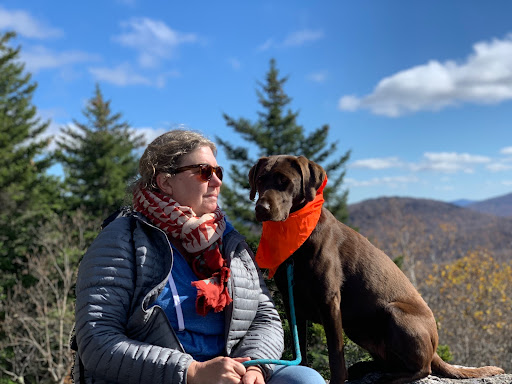 Leader of Friends of JP Dog Parks and JP resident, Melissa Hamel and her dog, Scout.

When Melissa Hamel bought her Jamaica Plain home in 1991, she could finally adopt a dog as she had always wanted. As a renter, she had not been able to own a dog in Boston, given that most landlords don’t allow them. She adopted her first puppy, Murphy, from a friend, and he instantly cemented himself as a beloved member of the family.

“The first thing I did when I bought my house was adopt a dog. Or maybe a mattress and then the dog,” Hamel recalled. Hamel was a single mother with a 10-year-old son working full-time at Boston University.

Hamel’s house sits across the street, overlooking a large baseball field that seemed perfect for exercising her dogs. For years, people did not mind sharing the field. As of 2016, over 7,000 dogs are registered in Boston. The city only has six official off-leash areas, and none are in Jamaica Plain. The three closest dog parks are roughly three miles away — an hour’s walk in each direction.

Hamel talked about how few restrictions Jamaica Plain had when she first adopted Murphy, “I don’t think there was a leash law, but things started to change in the city and across the country about how dogs were seen and regulated.”

After over 30 years, Hamel still lives in the same cozy yellow house on Lamartine Street with Scout, her two-year-old brown labrador. Although many things about the neighborhood have stayed the same, the divide between dog owners and non-dog owners has grown. The baseball field she spent decades taking her dogs off-leash turned into a hotspot of aggression toward dog owners.

With her son now completely grown, Hamel lives alone with Scout. She relies on her as an outlet for getting outside and socializing with her neighbors. Now, instead of depending on the park for friendly interactions, she is often met with anger and said that she has been yelled at so many times, it makes “you feel like a criminal.”

“It’s heartbreaking to know that your neighbors are possibly filled with animosity toward you when they don’t know you,” Hamel said.

Since the pandemic started, dog ownership has climbed 4% across the United States. Roughly three million more dogs are living in the United States than children under the age of 18. While she understands that not everyone wants to be around dogs, Hamel believes shared spaces are essential for building community.

“I dare you to go and watch a bunch of puppies play in a dog park and not be filled with absolute joy,” said Hamel, whose experience with dog ownership has brought so many loving neighbors into her life. “Because that to me is part of what makes a community a beautiful place to live. Our pets, our children, our sporting events, our musical events, and our arts- these are all parts of the community that really bring us together.”

In addition to the animosity from certain neighbors, “no dogs” signs started appearing rapidly on the field across the street from her house. This motivated Hamel to push back.

“I realized that instead of this continual conflict- why don’t we organize and advocate for a safe space?” she said.

Hamel now leads Friends of JP Dog Parks, a volunteer-led and community-based group fighting for equitable dog park access in JP and the City of Boston at large. She wishes that people understood that dog parks are beneficial for them. “If you don’t like dogs and don’t want to be around them, the safest thing for you would be to have a place where dogs can stay and not be bothered by dogs,” she said.

“I don’t want to see a pay-per-play model in this city because it would unfairly burden low-income families,” Hamel, who now works as an artist, emphasized.

Hamel and Friends of JP Dog Parks are open to ideas for fundraising but believe the government should fund dog parks like other community spaces in Boston.

Many efforts toward designated dog parks gained momentum and then quickly came to a halt, “Dog parks seem to be the one park where we’ve been told ‘you have to raise the money,’” Hamel said. “Whereas I don’t see the same sort of demands being made of people who want tennis courts, basketball courts, or playgrounds. So, it’s curious to me because we pay taxes like everyone else”.

During April 2021, Hamel helped gather attendance at a public meeting to ask for more dog parks in Boston. “Unfortunately, there was no follow-up after that hearing,” Hamel said.

Hamel has since contacted the Department of Conservation and Recreation (DCR) and Commissioner James Montgomery for a meeting to talk about dog parks. Friends of JP Dog Parks still want a chance to be heard. They have also reached out to city commissioners, who have also made requests to meet with DCR. Currently, DCR has not responded to any requests to meet.

According to Hamel, the DCR will not meet with Friends of JP Dog Parks, nor are they interested in building dog parks.

“I don’t think you need a study to show that people see a real value in dog ownership, and it’s evident in the numbers even before the pandemic,” said Dr. Dhruv Kazi, MD, a Jamaica Plain resident and member of Friends of JP Dog Parks.

After adopting his dog, Rumi, Kazi teamed up with Hamel to frame the debate around public health.

“The unmet need for dog parks is very clear. There are a ton of dogs in JP, and it’s surprising how little fenced-in space there is with dogs or even green space for dogs to run off-leash,” Kazi said.

Kazi studies the positive associations between dog ownership and heart health. In addition to spending more time outside and getting more exercise, owning a dog also improves immune function and mental health.

According to Kazi, the practice “reduces a sense of isolation and improves mood, both of which have been associated with improved cardiovascular outcomes.”

Kazi, who previously lived in San Francisco, was surprised at the lack of off-leash space in Boston and does not think it was accidental.

“As a city, we have completely under-invested in this infrastructure [and] some of it comes from the mindset that when we have many unmet needs in a city. Why would you invest in what feels like a luxury for a handful of residents?” said Kazi. “I disagree with that. I don’t think of dogs as a luxury anymore. It’s not surprising that people are adopting pets as a mechanism for combating the negative mental health effects of the pandemic.”

Rachel Scheckman is one example of someone who adopted a dog during the pandemic. Scheckman, a recent graduate of Boston University’s Master’s in Public Health, adopted her dog Mack in January 2021.

Although having a dog initially helped Scheckman build connections to other dog owners and find community, she felt at the same time it made Boston less friendly. She recently moved to Washington, D.C. in October with her partner and Mac.

“One of the main reasons I left is because there aren’t any dog parks in JP,” Scheckman said. “There are also other restrictions in Boston- you can’t have your dog on public transportation during peak hours, and you also can’t have your dog outside on a patio at a restaurant.”

She continued, “Cambridge and Somerville don’t have a restriction like that, only Boston.”

As a public health advocate, Scheckman argues that access to dog parks is an economic and potentially racial justice issue.

“It’s just a shame if you think about it. All the dog parks seem to be in wealthy neighborhoods,” she said.

Hamel, Kazi and Scheckman all believe that the city becomes safer for both dogs and people by designating off-leash areas.

“Instead of thinking of dog parks as something we do when we have a surplus budget, we should think of it as another part of what cities need to provide for healthy living,” Kazi said.

Friends of JP Dog Parks plans to walk in the JP Dog Parade rescheduled to October 31st to raise awareness about this unmet community need. They are also circulating a petition to get a designated fenced dog park in JP.