Conversations with the people making a difference in our community and what we can do to support them. 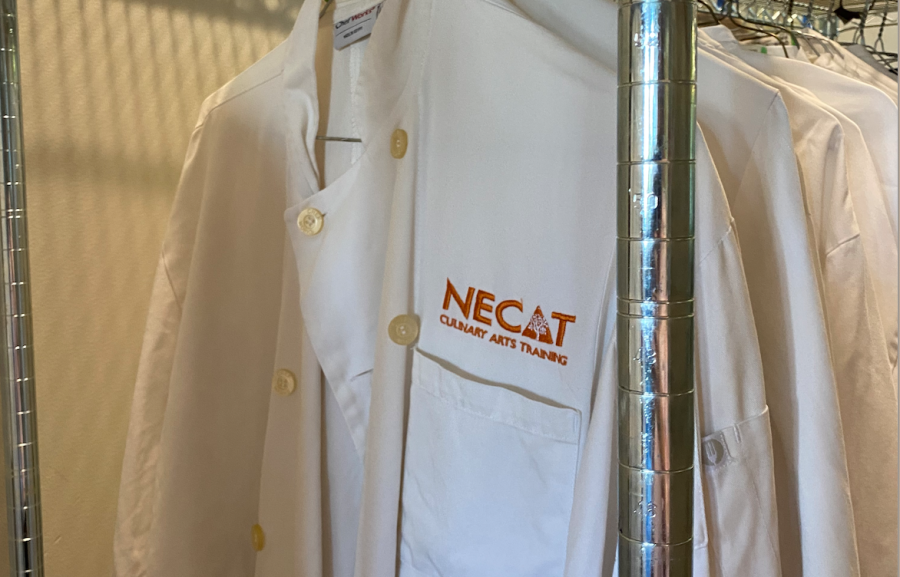 Photo of a culinary uniform at NECAT headquarters.

When we think of non-profit organizations, the focus naturally gravitates towards the groups or individuals being served, perhaps the problems they are facing, or ways we can contribute. But there is a whole crew of superheroes working behind the curtain to make it all happen, without whom our contributions would lack reverberation.

Chef Tom of the New England Center for Arts and Technology (NECAT) is one of those superheroes. Thomas Nelson, known by all who come across him at NECAT as Chef Tom, has led the hands-on instruction of a 12-week culinary arts job training program for the last three and a half years.

Starting out washing dishes when he was just 14, Chef Tom has spent time in the kitchens of hotels, Mom & Pop restaurants, fast-food and fine-dining establishments, and commercial institutions. He’s been a bartender, a member of front-of-house staff and a traveling personal chef. Now he’s sharing his hard-earned knowledge and 42 years of industry experience with the students at NECAT, “lifting Boston’s most vulnerable populations out of poverty and onto the path of economic self-sufficiency.”

NECAT students include the previously incarcerated and chronically unemployed, a challenge that has caused Chef Tom to reinvent himself as a chef and teacher (although he declares the commute to be the most demanding part of the job).

In the teaching kitchen, Chef Tom teaches much more than just how to cook. Threaded throughout his culinary lessons are teachings of forgiveness, self-confidence and accepting and responding to critique. In his own words, “not to sound narcissistic, but I feel sometimes like a cross between Gordon Ramsey, Tony Robbins, and Joel Olsteen…”

He’s a chef, life coach, and motivational speaker all rolled into one. At the same time, he emphasizes the importance of being real with his students, to set expectations that prepare them for success. They need to know what actions will lead to promotions, he says, and which will get them fired.

Chef Tom believes the greatest tools in his tool belt are patience and understanding. Hearing him talk about his students, he has no shortage of either.

Culinary training is the carrot that gets students in the door, but it’s the people at NECAT that are the real asset. Investing in people as a community resource is incredibly impactful. Every dollar you donate can raise 10, every employee you empower can empower 20 people. Investing in the superheroes of your community has an exponential impact.

No one understands that better than Anthony “Big Time” Seymour, who might just be having the biggest impact of all. As a consulting caseworker, Big Time connects students to any resources they might need outside of the classroom.

“Case management for me is understanding the cohort, what the needs are [and] helping them be successful while they move down this continuum,” said Big Time.

Whether it’s court involvement, doctor’s visits, child care or even housing, the needs of the average NECAT student are not needs that can be met by just anyone. It’s Big Time that has the connections to make real change in people’s lives.

At NECAT, the mission is job readiness, but the method is building community. The importance of community to the success of the individual cannot be overstated.  Access to a stable community, in many ways, is access to a stable future

Big Time shared the story of a student who lacked community.

“She was going through some court proceedings that kind of prohibited her to just be a normal returning citizen. She did some jail time,” he said. “I don’t know what the crime was. I never asked. I just knew there was a need…”

Big Time said that though the student was sleeping in her car, she came to class religiously.

“She was voting with her feet here every day, showing up,” he said. “So, of course, I’m gonna help her.”

Big Time helped her get housing and into other social programs.

“I sit here, and I speak with love and conviction about Jessica sitting beside me, Joey in the other room, Bri, Tiara, Chef Tom, Chef Jim, Jon…Elise… we have that compassion that makes us really successful,” Big Time said.

The original version of this story was posted on Medium.

This interview is a part of a Project Narratives assignment for Rahul Bhargava’s ‘Digital Storytelling and Social Media’ course at Northeastern University. Students are assigned to write and interview with community partners they are working with as a part of the service-learning component. To see more student work on NECAT, please visit the following:

NE-CAT (Hear more from the students)