HONK! Festival 2021 may be over, but social justice efforts continue 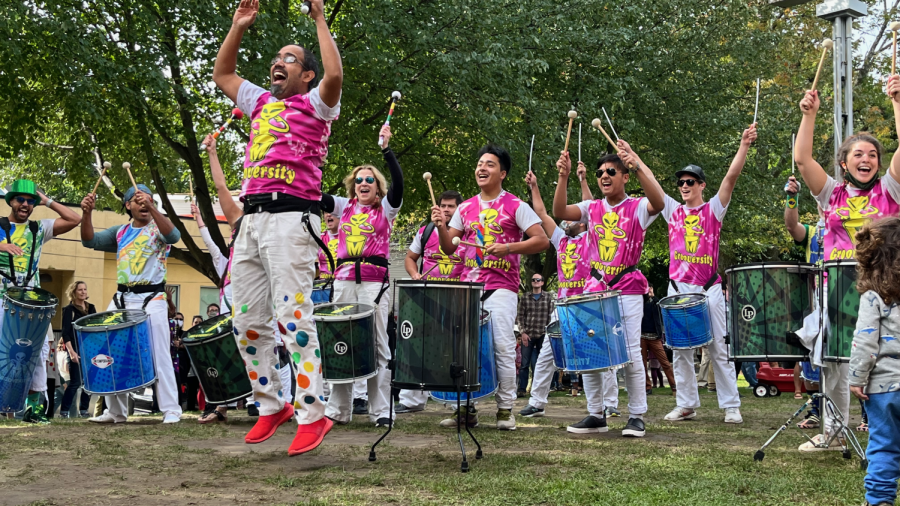 aNova Brazil teaches a dance to the HONK! Festival at Seven Hills Park in Somerville.

HONK! Festival 2021 activities kicked off last Saturday morning in Somerville, the historic home of the music festival.  The Second Line Social Aid & Pleasure Society Brass Band marched into Seven Hills Park from the bike path at 10:20 a.m. Located behind the Davis Square train station, Seven Hills Park was also the site of a tribute ceremony to Somerville Olympian Phil Reavis Sr. and performances from aNova Brazil and The School of Honk.

Harris Gruman, one of the HONK! Festival organizers, views the festival as a “symbol of where Somerville is headed.”

After the Second Line Social Aid & Pleasure Society Brass Band’s performance, the band acknowledged that the festival took place on land that was “stolen and colonized territory of the Wampanoag nations.”

The band delivered the following statement: “We celebrate the rich cultural heritage of our Indigenous communities and we honor and respect the resilience and fortitude of the Indigenous people. We understand that simple acknowledgment is insufficient and pledge to increase our awareness of the continuing injustices and to devote our talent and resources to participating in corrective action wherever possible.”

Somerville Mayor Joseph Curtatone also delivered a speech in which he addressed the celebrations of the HONK! Festival to the lives lost during the pandemic.

“It’s been an honor and a privilege, and I’m just going to enjoy—every day now and down the road — these events, and we’re going to be out of these uncertain times soon,” said Curtatone. “We’re much better than we were a year ago, but please remember, though, a lot of folks who are still suffering. There are a lot of people who have lost loved ones.”

“Let’s not forget there are a lot of other folks here who are important to us, we’ll never get back,” he said.

Curtatone said that even in one of the most affluent states in a country with abundant health care resources, 91 citizens of Somerville, 18,000 people in Massachusetts, and over 700,000 Americans have lost their lives to the virus.

This is the first time anything in Somerville has been named after a person of color. Reavis Sr.’s son and grandson, Phil Reavis Jr. and Phil Reavis III accepted a plaque highlighting his lifetime achievements on his behalf.

The back of the plaque was inscribed, “In recognition of and appreciation for all that you have done for Somerville – The Somerville HONK! Festival Organizing Committee, October 9, 2021.”

“We, the Reavis family, are very humbled to be honored and attributed today by, again, the absolute greatest street festival of all time,” said Reavis Jr, “Unfortunately, Dad can’t be here, but he does send his love and appreciation, both for the city of Somerville [and] especially HONK!” said Reavis Jr.

Performances from aNova Brazil and The School of Honk followed the tribute ceremony. Both groups encouraged participation from the crowd and invited people of all ages to dance with the bands.

This year, the festival branched out from its historic Somerville roots. The HONK! Festival was decentralized from Davis Square to various locations in Somerville, Cambridge and Boston this year to avoid gathering thousands of people together in a single location. HONK! also live-streamed performances on YouTube throughout the day.

“This is the first time that the actual festival will be in Roxbury,” said Cindy Diggs, whose efforts were instrumental in decentralizing the festival. “It’s gotten a lot of traction.”

A peace activist of 41 years known around town as “Mother Hip-Hop,” Diggs made it “[her] personal mission to support the businesses in Nubian Square.”

Diggs served as an administrative coordinator at Massachusetts General Hospital (MGH) at the start of the pandemic and was responsible for integrating the Feed the Frontlines efforts. She brought in mother-and-son-owned Soleil after she noticed there were no Black-owned restaurants included.

Diggs is deeply rooted in Roxbury, so she was concerned by the lack of support for the mom-and-pop businesses in her community.

“These businesses didn’t get the same money that other restaurants did, businesses did, and they didn’t have the infrastructure to be able to do it right on the spot,” said Diggs. “Us coming here and doing it — a grassroots way of getting people to support the businesses — that is social justice.”

Diggs had collaborated with HONK! Festival founding member Reebee Garafalo for other activism work in the past. The two knew each other from Rock Against Racism. He was also a guest speaker at a forum on race attended by MGH doctors and nurses which Diggs coordinated in August last year.

With the help of allies like Boston City Councilor Julia Mejia, Diggs put together another talk, this time inviting BPS to discuss the impact of the virus on youth with the return of in-person classes. The two forums were hosted at Nubian Square venues — Soleil and Hibernian Hall, respectively.

Diggs and Garafolo teamed up to film part of last year’s virtual event in Roxbury to highlight local businesses, among them Frugal Bookstore and Final Touch Boutique. Garafalo invited Diggs to join the committee, and she’s been involved since January.

Using her place on the Honk! committee to ensure this year’s festival would give back to her community was a priority for Diggs. She reminded HONK! attendees to “make sure that you’re buying things while you’re here… so that you’re sowing a seed into this community.”

She pointed out that to revive the local economy, people need to get back to work, and supporting local businesses and restaurants that employ people in the community is part of that recovery.

The festival indeed drew visitors and customers into the neighborhood, including Patty Yehle, a resident of Jamaica Plain who has lived in Boston for about 35 years.

“I was just looking around for a store to go support while we were waiting for music to start,” said Yehle.

For Damien Leach, who grew up in the neighborhood and showed up early to help set up, the day was a chance to bring healthcare resources and experts directly into his community.

Leach works in the Office of Equity and Community Health for MGH and manages a community care van, which serves as a mobile healthcare site. At HONK! Fest, the van was set up right next to MGH Brigham’s vaccine van. According to the Roxbury local, the vans travel around the city in synergy as a strategy to provide accessible healthcare — to “connect on a real, heart-centered level and then have the resources here.”

“We want to build trust not only for the sake of addressing disparities that have been exacerbated by COVID-19, but we also want to meet the needs of the people that are in these communities,” said Leach. “[Vaccines and clinicians] come from those institutions and to the communities where we can collaborate and support our community members.”

Leach said that combatting a pandemic that has had such a devastating impact on communities of color requires not only correcting misinformation but building trust. The vans create a trustworthy atmosphere for patients by employing multilingual and multicultural clinicians of color as community messengers. The increased engagement also offers the opportunity to connect people with healthcare they may lack, such as a primary care physician.

Volunteers hoped the increased community engagement around social justice, cultivated through the grassroots outreach by the community organizations and nonprofits, would continue. Diggs hoped that the increased activity in the neighborhood, which she saw as an everyday movement toward economic justice, would persist as well.

“HONK! is not going to be here next weekend. Don’t make this area a ghost town,” said Diggs. “We want people to come back.”