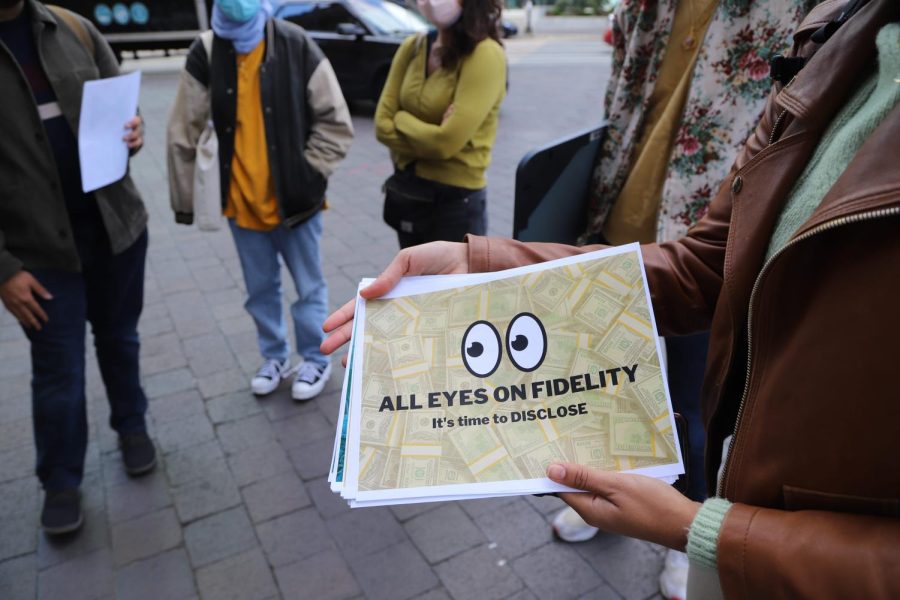 “Cause neutral”­ – when it comes to funding charitable organizations, that’s the stated philosophy of the largest philanthropic institution in the United States. Any charity, no matter its mission, can receive grants with only perfunctory screening.

In the case of Fidelity Charitable, $4.9 million was funneled to 31 hate groups between 2015 and 2017, according to a 2019 Sludge report. The study used the Southern Poverty Law Center’s (SLPC) classification of hate groups – groups that hold “beliefs or practices that attack or malign an entire class of people, typically for their immutable characteristics.”

After these findings emerged, the “Unmasking Fidelity” coalition formed to “disrupt this idea that a charitable institution can be neutral,” said Amira al Subaey, the deputy director of coalition member group Muslim Justice League.

On Thursday, the coalition delivered a letter to Fidelity Investments’ Boston headquarters with endorsements from 29 organizations. The letter cited the consequences of such a funding philosophy:

“We are writing… about our continuing concern that Fidelity Charitable’s Donor-Advised Funds (FC DAFs) contribute to tax-exempt non-profits that promote anti-immigrant, anti-Muslim, anti-Black or anti-LGBTQ rhetoric… This includes Turning Point USA, an organization…connected to the January 6th attacks on the Capitol, Alliance Defending Freedom, an organization that defended forced sterilization of transgender people and, Center for Security Policy, whose biased research underpinned the… Muslim Ban.”

The first demand is for Fidelity Charitable to publicize the last five years of contributions to 10 specific grantees. The coalition also calls for disclosing any screening tools that might be used to decide which charities are grant-eligible.

“Even if they continue to insist that they’re cause neutral, they can at least disclose and be transparent, stating that these organizations have received funding and that Fidelity Charitable benefits financially,” said Nadav David, organizer of the New England coalition member group Resource Generation.

For members of the Muslim Justice League, a Boston-based organization that advocates for the safety of Muslim communities, the risk of danger from Fidelity-funded organizations is real. Al Subaey says that this campaign offers an opportunity “to get ahead of that violence and actually cut the cord, [to] demand that philanthropic institutions that call themselves charitable… actually take a stand.”

In 2016, Al Subaey was a target of the activities of the David Horowitz Freedom Center, a Fidelity-funded organization characterized as anti-Muslim, anti-immigrant and anti-black by the SLPC.

“When I was a student at Tufts University… people affiliated with David Horowitz Freedom Center put posters all around our campus naming specific people involved in Students for Justice in Palestine and calling us terrorists,” said al Subaey. “That word carries an extremely heavy weight when it’s a Muslim person… a Black person…a Brown person…and can have really big consequences.”

In addition to Muslim Justice League and Resource Generation, the anchors of the coalition are Asian American Resource Workshop, Community Labor United, Political Research Associates, and the Action Center on Race & the Economy.

When the campaign relaunched with greater demands after the January 6th insurrection, Resource Generation was invited to play a more active role. According to David, Resource Generation is a multi-racial community of young people with access to wealth and/or class privilege committed to the equitable distribution of wealth, land and power.

One of these account holders is Margaret Hughes, based in Somerville. “I have a unique relationship with Fidelity, and I have the leverage to challenge [them] on their harmful practices,” said Hughes.

While Fidelity Investments and Fidelity Charitable are legally separate, their association and Fidelity’s influence make them a target in the campaign. “Saying I want the company I have accounts in to not…support the encroachment of fascism and white supremacist violence…is actually a very low bar,” said Hughes.

In this case, that means putting pressure on both Fidelity Investments and Fidelity Charitable to develop a more comprehensive guideline for screening prospective grantees. Institutions like Amazon Smile and Amalgamated already have policies to ensure that money doesn’t get funneled to hate groups.

“Fidelity Charitable is making an active choice to allow money to go to these groups,” said al Subaey. “And they could just as easily make a different choice… They have a clear legal pathway to do it.”

Representatives from the coalition delivered the letter to the front desk of Fidelity Investments’ headquarters on Thursday and were told that no one was available to speak with them.

The letter wasn’t the coalition’s first communique or public action toward Fidelity, but it indeed turned up the heat.

“It’s becoming more and more clear that there is no middle ground here,” said al Subaey. “There is no neutrality when it comes to white supremacy.”

Correction: A previous version of this incorrectly identified Nadav David as the director of Resource Generation.