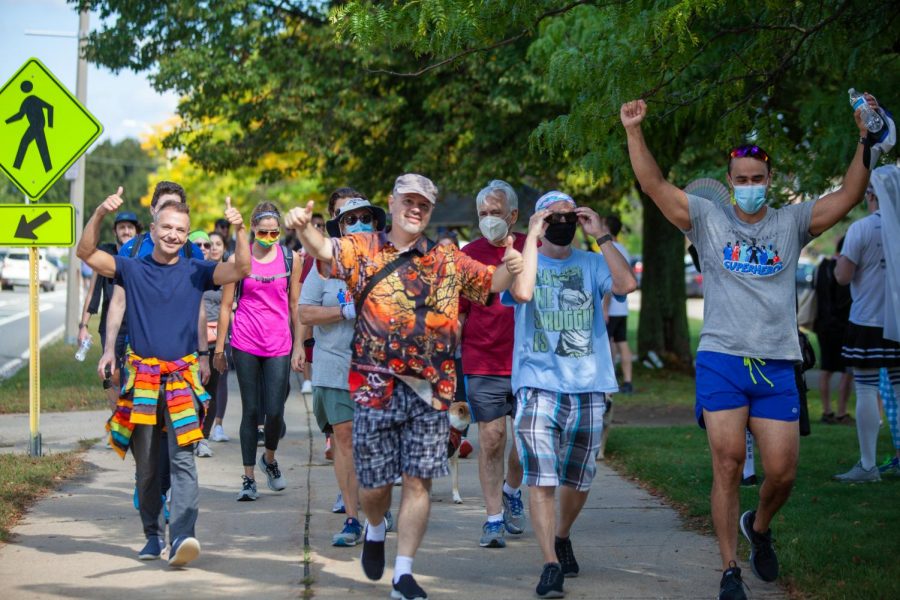 A group of walkers celebrated as they neared the finish line.

Over $360,000 was raised in support of HIV/AIDS treatment and prevention.

AIDS Action and community health center Fenway Health organize the fundraiser each year, and the proceeds are used to provide life-saving resources for people living with HIV and HIV prevention efforts. They also support programs that assist people with housing and legal services to attack the root causes of HIV/AIDS.

Angel Fuentes is the outreach coordinator on the sexual health and prevention team at Fenway Health. He helps provide free testing for HIV and other sexually transmitted diseases to patients that are often members of marginalized groups, such as LGBTQ and gender non-conforming folks and their partners.

“The resiliency that we have seen in the COVID[-19] pandemic is showing through these events that we’re doing again, and people are crowdfunding and crowdsourcing,” said Fuentes. “It just feels very important to me personally that we are able to bounce back.”

The support of those living with HIV is even more important as the COVID-19 pandemic takes its toll. In the same way, this pandemic has and continues to disproportionately affect Black, Latinx, gay, bisexual and transgender populations, as well as people experiencing homelessness or substance use disorder, inequitable healthcare structures perpetuate the disproportionate effects of HIV on marginalized groups.

“Working in the STI clinic, we have had a larger amount of people being diagnosed with HIV [during the pandemic],” said Fuentes. “They are individuals that are probably the most disadvantaged…it’s really at the center of intersectionality, because the people … who are not privileged, are the ones that are going to be suffering the most.”

According to the CDC, there are more than 1.2 million people living with HIV in the U.S. today. There are about 35,000 new infections each year.

Fuentes said that since the invention of antiretroviral cocktail medications in the late 90s, HIV/AIDS has progressed from a “death sentence” to a long-term chronic condition.

“People are living well past their 60s, taking the medication and not having as many complications as they did before,” said Fuentes. Improvements to HIV treatments mean that people living with the virus can reach a low enough concentration of the virus in their blood that it is considered undetectable, and therefore, untransmittable. There are also highly effective preventative drugs that people in high-risk populations can take to stop the spread of the virus through sexual contact.

However, the stigma associated with HIV still lingers.

“There’s so much stigma and shame in terms of the lack of education around who’s being impacted by HIV, because it’s oftentimes associated with gay people, and folks that have substance abuse issues,” said Jennease Hyatt, a community liaison for Gilead. Gilead is one of the event’s corporate sponsors and was promoting their campaign,  “What We Live For,” that hopes to turn stigma into celebration and find a cure.

“We’re now at the point where we can treat HIV with one pill once a day, taken any time of the day,” said Hyatt. She said that Gilead was present at the event to spread awareness within the community about educational resources that exist on the HIV epidemic.

Raising public awareness about HIV/AIDS was another goal of the fundraiser. According to Fuentes and other healthcare workers, talking about the disease openly is a way to combat the stigmatization and ensure more people have access to the healthcare they need.

“We just have to think about it as being something that people are living with, just like diabetes, just like heart disease,” said Fuentes. “Just like how we have walks for diabetes and cancer, there are walks for HIV and AIDS.”

Steven Schwab ran in the AIDS Walk and Run with a group of friends representing the Tufts Biomedical Queer Alliance, an organization that engages students in advocacy both at school and within the community.

“As future doctors, we think AIDS is incredibly important,” Schwab said of the alliance. 24-year-old Schwab leads the alliance and is a second-year student at Tufts University’s School of Medicine. As someone who hopes to serve a queer and trans population when he begins practicing medicine, Schwab wanted to reflect on that history and give back.

“I don’t feel like the social issues, especially around HIV and AIDS [were] addressed enough in our curriculum,” he said. Schwab feels that it is imperative for the next generation of doctors to understand the impact of the HIV and AIDS crisis from the perspective of queer and transgender Americans.

CDC data says that over 700,00 people in the US have died from HIV-related illnesses since the U.S. began monitoring the epidemic in 1981. Schwab said that he could have been one of the victims of AIDS, based on the fact the epidemic has disproportionately ravaged the LGBTQ+ community, especially in decades past, leaving behind lasting trauma in its wake.

But the virus, whose effects can now be mitigated, still poses a threat. If current infection rates continue, as many as 1 in 6 gay or bisexual men will be diagnosed with HIV in their lifetime. For Hispanic/Latino and Black men who have sex with men, the rates are even more distressing—as many as a quarter of Black gay and bisexual men and half of their Latino counterparts will receive a positive HIV diagnosis.

“I feel a lack of kind of mentorship and leadership around … being a gay person in society,” said Schwab. “[The run is] a way to remind me personally of the history that is honestly lost on me and lost on many of my peers and colleagues.”

A collection of multicolored ribbons waved in the breeze, inscribed with prayers, wishes and tributes. The Prayer Ribbons, which commemorate lives lost to HIV/AIDS and anti-LGBTQ+ violence, were a powerful visual statement about resilience and hope displayed near the race start and finish lines.

“It’s to honor people we love in our lives, those who are deceased, but also people living who are part of our network,” said Jay Critchley, an artist whose other work also calls attention to social issues.

Critchley, 74, is also the director of the Provincetown Community Compact. The compact sponsors the Swim for Life and Paddler Floatilla that takes place each year in Provincetown Harbor. According to Critchley, over $5.5 million has been raised for AIDS and women’s health since Swim for Life began in 1988.

“This is the first time we’ve been invited, so we’re very honored to be here,” said Critchley. A special strand of ribbons grew throughout the day as people added their personal messages to more than 4,000 others. The ribbons rippling in the ocean breeze carried loving remembrance and wishes of all the people who have added to the installation since 1993.

The Prayer Ribbons have communicated this important social message in a political way as they have been displayed at the State House and in a congressional office building in the nation’s capital.

The fight to end HIV and AIDS, and the stigma associated with the virus, is one that everyone can join. In order to make a difference in the lives of those who are living with HIV, and to prevent new infections, the general public can work in community with the marginalized populations who have been most affected—the AIDS Walk and Run is the perfect example of the power of that alliance in action.

According to Critchley, “We’re all queer in our own way, right?”