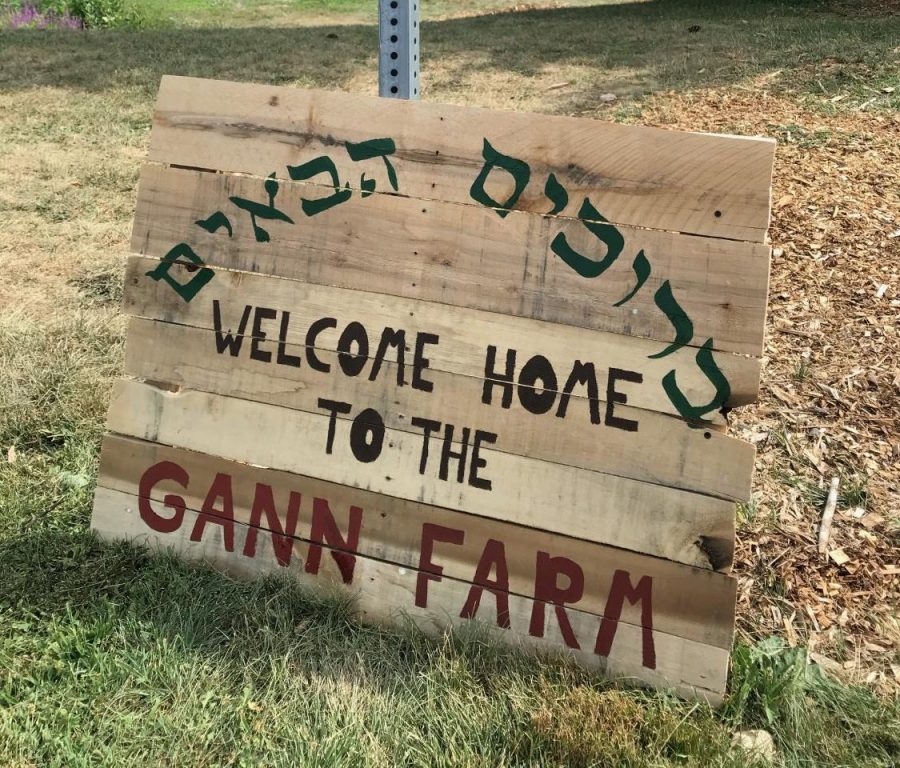 Wooden sign in Hebrew and English lettering in front of garden beds at Gann Farm.

Being Jewish at Gann Farm is unlike being Jewish in a synagogue or classroom. It means muddied knees, singing in open air and connecting with the land — a chance for youth to do as their forebears did.

The farm lives on the campus of an independent Jewish High School, Gann Academy, in Waltham, MA. Its mission is to build the Jewish community from the ground up. “Khadesh yameinu ke’kedem” — it seeks to “renew our lives as in days of old.”

The vision came to its founder, Noah Weinberg, while reciting the blessing borei p’ri adamah before eating a snap pea he had picked at a Jewish farm in New York. “Thank you God who creates fruit from the earth.”

“[On the land] I felt that connection … the immediacy of that blessing I’d said so many times.” In that moment, the closeness between Judaism and farming was palpable, and he wanted to share that with more youth.

“How powerful could it be for a young person to be able to come … home and say the Friday night kiddush over grape juice that they helped grow and squeeze on their own Jewish farm?” said Weinberg.

In 2019, Weinberg (then a Jewish and Student Life fellow at Gann Academy) proposed his idea for an educational farm and secured funding from Hazon and Combined Jewish Philanthropies. As a physical education option and a summer internship, the farm offers Jewish teens hands-on practice in regenerative agriculture and ancient farming traditions.

Like many religions, Judaism is deeply earth-based. But thousands of years of persecution and emigration have strained its connection to the land.

“Our holidays … our deeply agricultural calendar … our texts, our prayers, were written in a context of people who had a life on a land,” said Weinberg.

For Laurel Obermueller, a Gann Academy high school senior, the summer internship was her first farming experience. She reveled in watching sunflowers grow from tiny seedlings to large stalks. “This life has been created, and I put it in the ground,” she said.

She, too, felt the familiar Jewish blessings of gratitude take on a deeper meaning. Along with Weinberg, two summer staffers and eight other teen interns, Obermueller started each day singing the morning prayer, modah ani — “grateful, am I, to wake up this morning and have my soul returned to me.”

From the Biblical practice of tithing, giving a portion of profit to those in need, to pe’ah, the Biblical mandate to reserve the corners of the farm for anyone to pick, Gann Farm’s agricultural practices are rooted in ancient tradition.

The farm also participates in the Jewish Seed Project, a network of volunteers collaborating to “find, grow, and share culturally resonant seeds across our community.”

Weinberg heard about this project through the Jewish Farmer Network, which convened a conference in Reisterstown, Maryland in 2020. It was the first formal gathering of Jewish farmers in the United States in 100 years.

“The question that hung in the air … was what are our seeds as a Jewish people?” said Weinberg.

Along with five other farmers throughout the country, Weinberg is attempting to grow qishu’im, an ancient cucumber/melon mentioned multiple times in the Hebrew Bible. Or at least, a closely-related varietal.

“While it was [once] important … to have a Judaism of the word that could be portable,” Weinberg said, “there was something lost in that process” — including the seeds of the food Jews once grew.

“[This seed] is a [biblical] story of leaving Egypt in great haste … and reminiscing about the fruits of the past,” said Masha Vernik, Seed Project coordinator. “This seed is a story of reconnection.”

Today, Jewish farmers can take a bite out of the crunchy, quishu’im look-a-like and wonder “did my ancestors taste this, too?”

But the farm isn’t only focused on the ancient. Weinberg says that addressing climate change is one of the draws to sustainable agriculture, especially for young people.

In thinking about climate change, Weinberg and the teens created a Rainbow Garden – seven beds planted with crops in seven colors. Symbolic of inclusion, it also calls to mind the rainbow in the story of Noah’s Ark.

“[The Rainbow Garden] reminds us of our promise to the Divine … to ourselves, that we’re going to do our best not to destroy the world again with floods,” said Weinberg.

Gann Farm also reckons with the politics of land. As a diasporic people, Jews inhabit spaces that already have a history. In this case, a land once stewarded by and taken from the Wampanoag people.

A portion of the revenue generated from produce sales at the Gann farmstand is distributed to the Native Land Conservancy, a Native-run land conservation group preserving a habitat for all living things and restoring land to its original state.

This principle of restoration guides Gann Farm. In recent years, a disused soccer field – today a site of spiritual and ecological renewal. As Weinberg said, the farm is a place “where you can feel the spiral of Jewish time.”

Correction: This article has been updated to include that Noah Weinberg also received funding from the Hazon organization.