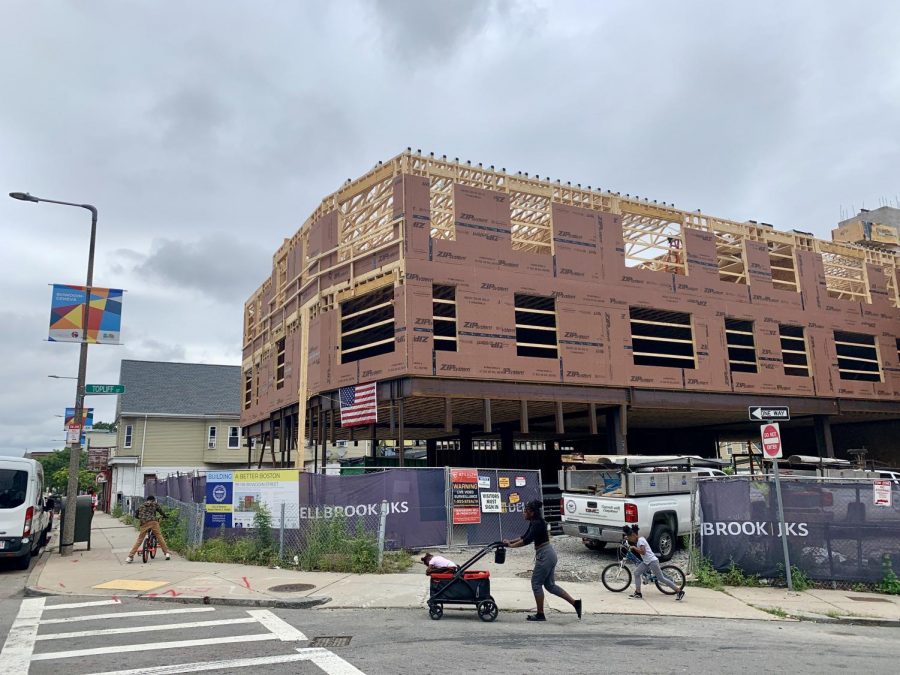 A look at the future site of the Dorchester Food Co-op at Bowdoin and Topliff Streets in Dorchester.

At first glance, the Dorchester Food Co-op could be any other business in a wave of gentrification hitting the majority low-income, Black and Brown neighborhood of Dorchester in Boston. But co-op members offer a different backstory.

The vision began 10 years ago with longtime Dorchester residents knocking on doors and gathering in backyards to discuss an unmet need — access to healthy, culturally relevant food.

The Dorchester Food Co-op is a “grassroots initiative to build a community & worker-owned grocery store” that “challenges the traditional food system.” It seeks to make healthy food accessible, source from local vendors, and employ local residents.

Unlike a typical grocery store, member-owners — over 1,000 so far — have a say over location, products, employment practices, and more. Its storefront, welcoming both members and the general public, is set to open in 2022 in a mixed-use development that will include 41 affordable housing units.

Originated by Dorchester residents, the co-op prioritizes “who’s here and who’s always been here,” said Lynn Murray, a co-op member-owner and Dorchester resident of 20 years. Not like the restaurants, eateries, and luxury condos that are appearing in the neighborhood.

It’s “a model that’s actually already part of many of our histories, culturally, in communities of color,” said Marcos Beleche, president of the co-op’s board of directors.

With its alternative structure and ideals, the co-op has secured its first brick-and-mortar location during a pivotal moment for Dorchester. According to a 2017 study by the National Community Reinvestment Coalition, the neighborhood of Dorchester was in the lower 40th percentile of income and home value and therefore “eligible for gentrification.”

According to local residents, gentrification is here.

“The neighborhood today…the people I see walking on the streets of Dorchester today – I didn’t see 10 years ago,” said Murray.

Natural food stores and co-ops historically cater to and attract white, wealthy consumers, so it’s easy to perceive Dorchester’s as part of the wave of gentrification. Co-op members say it’s both a perception and a reality.

In Beleche’s experience as an affordable housing community organizer, he observed that Dorchester residents “saw every new improvement as something that was preparing the way for somebody else.”

While the co-op philosophy seeks to counter this phenomenon and will be primarily owned by the existing community itself, any attractive amenity can draw new people and wealth into a neighborhood. Residents of Dorchester feel mixed about this paradox.

“I think there are folks who are like ‘Yes, we want a beautiful place. We just want to be here,’ said Liz Wang, co-op member-owner and volunteer.

Rising property values and the associated displacement of low-income residents are a great concern for many co-op members and community groups like Dorchester Not For Sale.

Amidst a slew of development approvals by the city, activists have been getting organized and fighting projects like the Dot Block development, which attracts wealthy residents and does little to provide affordable housing.

“What can the co-op do? Well, by itself, the co-op can only do so much,” Wang said. “…but what can the city do to protect space and housing?”

The co-op is not an anti-gentrification strategy, but Wang said it’s committed to mitigating gentrification’s impacts by being accessible to existing Dorchester residents.

Its Solidarity Committee is considering strategies like solidarity shares for BIPOC and low-income people – making membership available at a lower price through contributions from those with extra to give. Tiered pricing, in which people pay for groceries based on income level, is also on the table.

Beleche is excited about the co-op’s forthcoming opening, and he knows that it’s just one step toward full community ownership and food sovereignty.

While the co-op will be owned and governed by its workers, it faces the risk that all renters do in a transitional neighborhood – the possibility of displacement.

“Owning land allows you to decide so many things, and it makes your role more permanent,” said Beleche. “It’s hopefully something that we will be faced with at some point – the opportunity to own.”