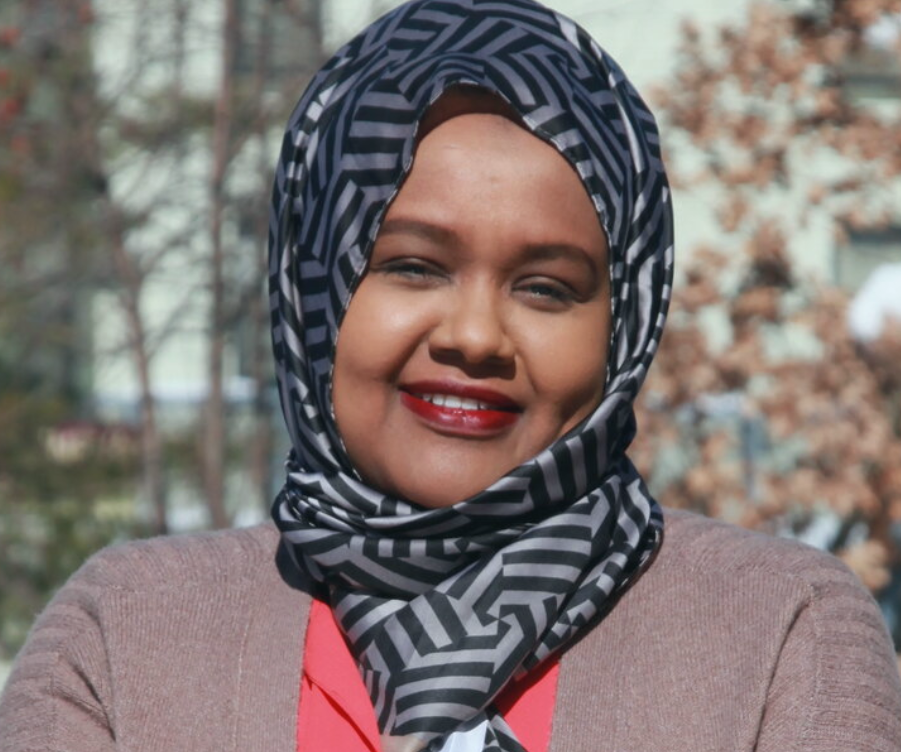 Deeqo Jibril, a community organizer, advocate and small business owner, is running for District 4 city councilor to represent the neighborhoods of Dorchester and Mattapan, as well as parts of Roslindale and Jamaica Plain.

At the age of 12, Jibril came to Boston as a Somalian refugee and settled in Roxbury. The 43-year old is a single mother of four now and lives in the Four Corners neighborhood in Dorchester, where she has made her home for the past three years.

Jibril has owned and operated Morning Market, a convenience store located at 206 Washington St. in Dorchester, for two years. In 2010, she founded the African Mall in Nubian Square, which promotes African-owned small businesses and is currently home to over a dozen small businesses. As a manager at the City of Boston’s Economic Development Office, she implemented and expanded programs that assisted minority-owned small businesses to open and grow in District 4.

“America says to the rest of the world, we’re the richest country, we’re the land of opportunity,” Jibril said. “That needs to be seen in our neighborhoods.”

The Scope spoke with Jabril about her campaign’s top issues and her plans to address them if elected. The following conversation has been edited for length and clarity.
How does your background prepare you for this job, and what inspired you to run for City Council?

I have mobilized in communities, especially the African community, who were not civically engaged to get more engaged. I organized the first African town hall meeting for [Deval] Patrick’s reelection campaign.

I am the founder of the Somali Community and Cultural Associations, where I helped countless immigrants get help to navigate the system, whether they need the pathway to citizenship, whether they need housing. I worked at the ABCD housing department for seven years, and my role was to help families who live in a shelter get affordable housing. And from there, I became an advocate to prevent eviction.

Prior to that, I worked at Children’s Services at Roxbury. I was promoted to the Mental Health Council, where I provided resources and connected people who live in the district with the resources they need and broke the barriers because there’s a stigma towards mental health.
What has your experience been like working and living in Boston, and how have you worked with your community?
My family struggled to make a living in Boston. When we first arrived, we didn’t know English, and we had no homes. When I went to English High School, I didn’t see any teacher that reflected me like me. I felt helpless as an ESL student.

When I lived in Roxbury, I experienced a hate crime. My children were called terrorists because just because they are Muslim. They were born in Boston, raised in Boston. And when the Boston bombing happened in 2013, our Muslim community was targeted. When I had the hate crime, I didn’t even know I could call the police. I didn’t think the police were there to protect women like myself.

I took a bold step because so many Somali moms came to me crying out to me since I am the leader. I organized a town hall meeting for just parents to share their fear about the police and then another town hall meeting for youth to share their concerns. I organized the basketball games with the Boston police and our youth. I challenged the police. I said, ‘Don’t come to my games because you just want to fulfill your spreadsheet. This is not community engagement. If you come to my basketball game and you break bread with that youth, I want you to help that youth.’

What can we do for each other? And how can we stop this racial profiling that every Muslim should be treated as terrorists? We are good people, and we want to be treated equally as Americans.

I know there are countless people who went through, who are going through what we went through. And I want to be that city councilor that’s there for people and meets them where they’re at.
How is your campaign different from the other candidates that are running to represent District 4?
The challenge I have is that sometimes people label me as an immigrant candidate who wants to advance the immigrant agenda. And I don’t know what that means. I am a single mother. I am a business owner. I am a Muslim. All that identity. I’m not alone with that. I share with countless Bostonians. We have to find what we have in common instead of dividing.

At the end of the day, I think immigrants and non-immigrants are all in the same boat, and we need to fight together.

I’m not doing this to get a job at City Hall. I already have a job at City Hall. I want to make a difference. If it weren’t for people who had helped me, I wouldn’t even dream of becoming a candidate in the city of Boston. So many people paved the way, and I want to do the same thing. I just want to turn the tables and help people.

A lot of people, when they get elected, they lose sight of who elected them. I will make sure that I work for the people. They don’t work for me.
What are some of your campaign’s key issues?
Increasing access to affordable housing and homeownership. I am a renter, you know, and I know people who are renters and elderly who live on a fixed income and are getting displaced. I was in Roxbury since 1991, and I couldn’t afford it anymore. And I don’t want that to happen in D4 or anywhere in Boston, for that matter. People born and raised in their community should have all the rights to stay there and raise families.

So we need to fix a broken system that sometimes can lead to uncontrollable incidents. It breaks my heart to see how our communities are so underserved. At the age of 12, I survived a civil war. Thank God my family had the means to escape the war, and stayed at a refugee camp, and got a chance to come to Boston. And I don’t want my kids to go through what I went through. My platform is providing district youth with greater opportunities. Africans, we say it takes a village, and I know back in the day, this community had that village. We need to bring it back home, where neighbors cared for one another, looking out for one another, where we’ve given our youth second chances.

District 4 has 42 schools. Most of them are underfunded. Why can’t we give the resources, so children don’t have to travel somewhere else to go to school? Mattapan doesn’t have a high school. So the children of Mattapan have to travel an hour and a half to get an education. That’s unacceptable. So I want to invest in resources. I want to see afterschool programs for youth. We need to change our language towards youth, too, or towards communities of color.

As a city councilor, I want to address racism. I want to address social justice. All my life, I’ve been doing the social justice stuff where I was advocating for my community, and I will continue to advocate for the voiceless if I get elected.
If elected, what is your plan to achieve your goals or implement policies?
There are not enough affordable housing units. I will propose to increase the affordable housing percentage. Currently, it’s 13%, I’m proposing to increase it to 33%. I want to revisit the income guidelines. I need to visit that income gap. Your affordability should not be based on whether your income’s too low or too high. Where do we put families whose incomes are too high or incomes are too low to get a place to live? So many countless families are in a shelter now. They’re homeless. They should be priority one. I want to work with the Boston Housing Authority to expedite their waiting list…so people don’t stay in subsidy for generations, and they have a pathway to homeownership. Isn’t that the American dream?

I want to work with the Boston Teachers Union to hire teachers of diversity, teachers of color, and minorities. We need to reflect the students we serve.

A lot of people are saving money and starting their business and have that entrepreneurship skills, but are lacking in resources. Before Covid, the small business minority community was not getting helped, and Covid just made it worse. A lot of businesses were struggling because they couldn’t come up with the rent. And the city of Boston gave rental assistance, but some of the businesses missed the deadline. A lot of communities of low-income people are struggling with language barriers. How can we extend the deadline? How can we do outreach?

I want to be able to push the contracts; the city of Boston contracts, 5% is going to minority [owned businesses]. The city of Minneapolis they have an interest-free loan, up to $50,000. And I want to propose that if I get elected. I will think about all that because I’ve seen the barriers firsthand.
Is there anything else that you want to share that I didn’t ask you?
When I canvass, people say, ‘The only issue we have is we only see elected politicians during election time.’ They could better serve the residents they serve by showing up, being accessible and following up. We need to be able to return phone calls with urgency—every phone call should be urgent because the person we talk to is urgent to them. I worked at City Hall for three years, and I know how sometimes governments are not proactive. If I get elected, I want to have an office in the district. I want to meet people where they’re at.