Formerly incarcerated woman sets to provide housing and support in Roxbury for women coming out of the prison system to help them recover from their trauma. 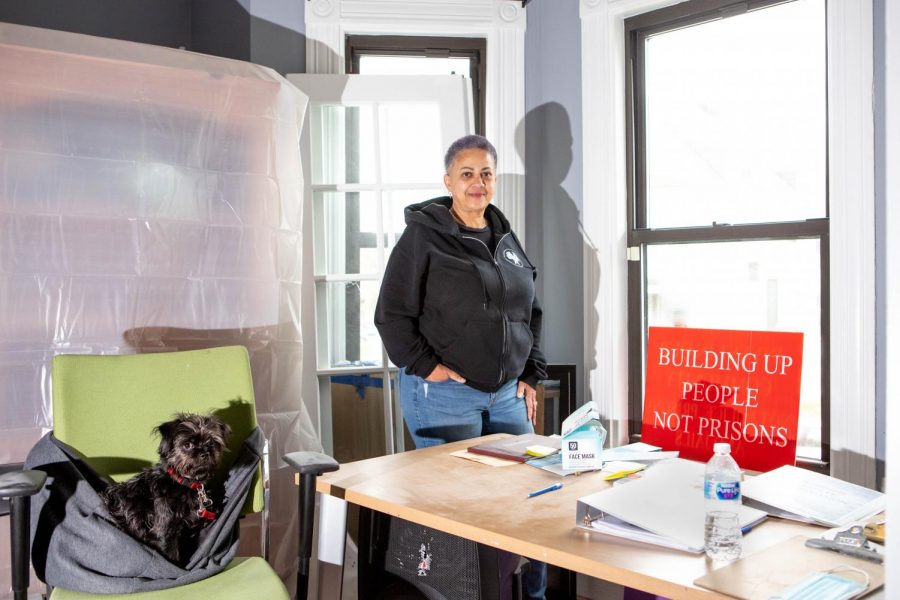 Stacey Borden and her dog standing near a "Building Up People Not Prisons" sign in an unfinished room at new Beginnings Reentry Services on April 17, 2021.

Content warning: The following story briefly recounts experiences involving harm and sexual violence endured by the subject. The editorial staff worked with the author to maintain the integrity of this piece, keeping in mind and supporting survivors.

The door to the house stood wide open. It’s a barn-red Victorian structure, wise with age and situated on a quiet street in Roxbury. The sun-bathed backyard is visible from the wraparound front porch. The ground floor is spacious yet cozy, and a cheerful bouquet of flowers sits on the spotless granite kitchen counter.

In the backyard, a group of women from a local mosque clustered around Stacey Borden.

Borden is a woman who smiles and laughs easily, but that day, she spoke to the group with the poise and gravity of a seasoned business person. She’s 59 years old, with short hair cropped close to her head and dark brown eyes that glow with contagious youthful exuberance. She had on a light collared shirt with understated silver jewelry, and her small, black dog, Spirit, was tucked into a gray sling she wore across her body. The women from the mosque nodded thoughtfully as Borden described what the house will soon be — a place for women just released from prison to recover from their trauma and build a new life.

“I want this to look like a safe, arts environment,” she said. “Everything you can imagine that a little girl dreams of becoming, we want to get to that dream. We want to be able to let her know that you have the capability, the strength, the resiliency.” There is no lack of women in need of these services — about 200,000 women are incarcerated in the United States’ local jails and state prisons, according to a 2019 report by research nonprofit Prison Policy Initiative.

The rooms inside the house are overwhelmed with construction, caught in a state of becoming. But the aura of home already saturates the space. The soft yellow walls glow with natural light, a set of wicker furniture is arranged on the back patio, and houseplants are scattered throughout the bedrooms on the upper two floors. In the bathrooms, an ample supply of tampons and pads are prominently displayed above the toilet. They’re a small luxury, but one that incarcerated women can’t easily access, Borden explained. She speaks from experience — she went in and out of prison for almost three decades.

In 2016, Borden founded New Beginnings Reentry Services, a Roxbury-based nonprofit committed to helping formerly incarcerated women heal from trauma and avoid recidivating or returning to prison. This house, which Borden is hoping will be ready to accommodate ten women by September, is so much more to her than a building — it is the culmination of a lifetime of trauma, sexual assault, drug addiction, lack of resources, mental health issues, and finally, healing and transformation. It is the physical embodiment of something she’s always sought — a loving, supportive community that focuses on recovery rather than punishment.

Borden is the youngest girl in her family, the second youngest child of 12. Before moving to a house near Franklin Park at age 11, she lived in the heart of Roxbury, on the fringe of the Orchard Park Projects. It was a community made up of primarily low-income Black families and notorious for gang violence and drug trafficking. Resources were nonexistent.

Borden’s childhood was permeated with fear. She went to Albert Palmer Elementary School, a large, brick structure on Eustis Street cloaked in dreariness, similar to those in the projects of her youth and the prisons she later spent years of her life in. “No wonder it was easy for me to be OK with going back and forth to jail for 30 years,” she said. “It was already there. It was already in me, posed through this system that they call the infrastructure of oppression.”

Borden’s father, George, was an alcoholic in her early childhood — never violent, he couldn’t even spank his children without crying —before he quit drinking and built a career as a community advocate and court officer. She revered him and still tenderly refers to him as “Daddy.” Her now-deceased mother was the matriarch, shepherding the family through tough times, but Borden couldn’t help but feel she was often emotionally unavailable.

“It took all my life for her to say I love you,” Borden said. “She didn’t say that until maybe a month before she passed away.”

The drugs came when Borden was still a child. She started using cocaine at around age 15, and it became the only friend able to alleviate the pain festering inside her. Out in the streets, she found an escape and fell into a pattern of criminal activities, mostly stealing. It was a tough place — she witnessed a murder and was violently assaulted multiple times.

Borden was raped by a male friend at age 18, after they had gone “creeping,” or sneaking into hotel rooms as inhabitants left and robbing them. They were at his apartment and after he attacked Borden, he told her to get out, tossing her a paper bag with her share of the stolen money. It was only when she arrived home, still in shock, that she discovered the bag was filled with shredded paper. She never reported her rapist to the police.

In the same year, 1980, Borden was incarcerated for the first time, at a county jail in Maine. She and five friends were caught stealing money from a car. Borden stayed at the jail for almost seven months, until her parents were allowed to come pick her up.

That marked the beginning of decades of drug use to cope with untreated trauma, stealing so she could get more drugs and getting arrested. In her 30s, she served a one-year sentence in 1992 and a three-year sentence in 1996. From 2002 to 2006, she was “on the run,” getting arrested and never showing up to her court dates. By 2006, she had 15 warrants to address in court.

In 2006, at age 45, Borden was sent to the women’s prison Massachusetts Correctional Institute Framingham on high bail. She was facing so many charges that she had to go to court 64 times in nine months.

One day, in 2008, when she walked into court, the judge, James Coffey, recognized her as George’s daughter, since George worked in the court system. “What is going on with you?” Borden remembers him saying. “What do you need?”

Borden began sobbing. She was in her late 40s, and this was the first time anyone in the criminal justice system asked what they could do to help her. The first time she was presented with something more than punishment. At that moment, she chose not to do what she usually did, which was to convince the judge to give her as little time as possible. She took accountability for the charges brought against her, admitted she needed help dealing with her trauma and was given three years at the Correctional Recovery Academy, a treatment program in MCI Framingham for moderate to high-need offenders.

“I left out of there with a sense of freedom,” Borden said of how she felt exiting the courtroom that day. “It was almost like my mind opened up, and I saw the world different. Because somebody treated me different.”

When she was released two years later, in 2010, her parents were nearing death. She helped her brother and sister care for both for about a year, up until the end. Her father passed first. He had cancer and dementia, but when one of Borden’s brothers pointed at Borden, asking George, “Who’s that, big man?”, he responded “That is my Stacey. That’s my favorite.” That day, she promised that she would go back to school and become just like him. George died hours later. Borden’s mother followed four months later.

Borden kept her promise. Beginning in 2011, at age 50, she attended Cambridge College for both her bachelor’s degree in human services and master’s degree in mental health counseling with concentrations in trauma and addiction. She didn’t realize it until later, but it was the same college her father had attended after overcoming alcoholism.

While earning her master’s degree, Borden joined a Wheelock College class for a trip to Scandinavia. She was shocked at how humanely criminal offenders were treated there.

When Borden graduated from her master’s program in 2016, she founded New Beginnings. She scrounged up money from shoe drives until she was hired by her mentor Andrea James to work on the nonprofit full time. James is the founder of the Roxbury-based Families for Justice as Healing and the executive director of the National Council for Incarcerated and Formerly Incarcerated Women and Girls. Borden is actively involved in both organizations.

In 2019, Borden enrolled in a Boston College business class that was free for formerly incarcerated individuals. At the end of the semester, she pitched her idea for the house to a room of potential donors. Not a single attendee asked a question, and Borden thought she had blown it. However, when she got home, an email was waiting for her — a couple who had attended the presentation wanted to buy her the property, which ended up costing about $750,000. The donors wish to remain anonymous but still meet with Borden weekly to support her in opening the home.

Borden ended her tour with the women from the mosque, and the group spent 10 minutes coordinating a photo before falling into an animated conversation about the importance of treating, not punishing, those who commit crimes. They discussed the negative impacts of gentrification on their neighborhood and the need for community members to know which local politicians are actually supporting the interests of Black and brown people.

Women will begin arriving at the house in just a few months, Borden hopes when the final touches are complete and construction is cleaned up. She’s partnered with the Massachusetts Department of Corrections, which will refer women from local, state, and federal prisons. The women will be accepted on a first-come, first-serve basis. Professors and theater organizations will work with the residents, and there will be a case manager, a licensed counselor, and staff around the clock to assist with all-day programming. After 30 days, the women can choose to search for a job or pursue their education further.

“We will support you in this, Stacey,” one of the women from the mosque said. “We will.” Another nods, chiming in — “This house is beautiful. And the environment sets the attitude. Women will walk in here and hopefully believe that they deserve this, deserve something better.”

Borden has transformed her life, but she knows the trauma will never go away. In fact, she purposely holds the pain close to the surface, keeping memories of the violence she endured and the harm that she caused in the front of her mind. Borden sits with it, and she does her best to heal. And she will sit with the women who come to live in this house too, as they heal.

“What you’ve endured in your life can’t go away. None of the trauma goes anywhere,” she said. “But you will be able to acquire the tools to manage it. So, you won’t go back and recidivate and end up back in a cage.