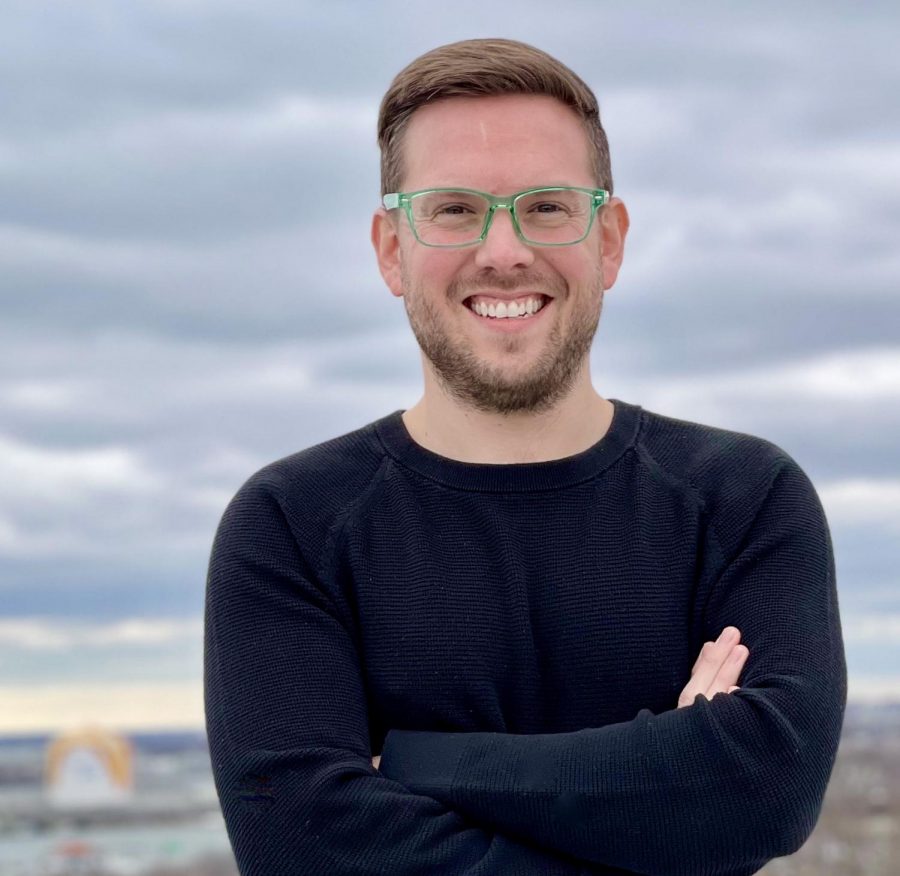 McBride is a manager of the customer success team at HubSpot and has a background in operations consulting.

“I’m fact and data-driven in my current professional life. I know that numbers matter and facts matter, but I know that there’s a human element to every decision,” he said. “I want to be sure that I’m pursuing realistic policies while being compassionate and empathetic to the community and the very real struggles that we’re facing today.”

McBride moved to Boston from Pennsylvania, and attended Northeastern University. He lives in Dorchester with his husband Matt Silva and their dog Pru.

His campaign, he said, focuses on COVID-19 recovery for small businesses, the housing crisis, equity in education and public health, and the racial wealth gap in Boston.McBride hopes to represent younger residents and progressives of District 3, where almost half of the residents are under the age of 34. If elected, he would be the third openly gay Boston city councilor, besides David Scondras and Liz Breadon.

“I’m gay, so growing up in the closet I’ve seen firsthand the harm that it can have when your government isn’t working for you or worse when it’s actively against you,” he said. “That knowledge always lives with me.”

The Scope recently spoke with McBride about his campaign’s top issues and his plans to address them if elected. The following conversation has been edited for length and clarity.
How does your background prepare you for this job, and why did you decide to run?

I think you know, it’s the multitude of my experiences that have really prepared me most for this job. I’m gay, so growing up in the closet, I’ve seen firsthand the harm that it can have when your government isn’t working for you or worse when it’s actively against you. That knowledge always lives with me.

I’m also fact and data-driven in my current professional life. I know that numbers matter and facts matter, but I know that there’s a human element to every decision. I want to be sure that I’m pursuing realistic policies while being compassionate and empathetic to the community and the very real struggles that we’re facing today.

At the end of the day, I don’t have a personal agenda here. I’m here to serve District 3. I want to show what’s best for District 3. I’m not in this for myself, but rather to really try and provide for everyone the life that I think they deserve and to make sure that they can live a healthy, fulfilling and safe life here in Boston.

What led me to run? When I think about it, I don’t really have a catalyzing event that sparked in me and said like, “I want to run for city council.”

It’s been something of a steady march towards this realization and then it was something that I should, or that I even could really do. The past four years have really shown us a new side of politics.

It’s been divisive and toxic, and I don’t believe that blame should be shared equally. I think that there are certain folks that are really to blame for some of that divisiveness. But what it’s shown us is the power of strong, unapologetically, progressive voices at all levels of government and that we can ensure that, no matter what happens at the federal or the state level, Boston can and should continue to be a beacon of progressive values.
What are the most important policy issues on your platform?
Candidly, there’s a lot of work to be done.

2020 has certainly dealt us quite a challenging hand that I don’t think many of us would have anticipated. So first and foremost, for me, I think COVID recovery is going to be a huge part of our life going forward. I know that things are looking really good now. It looks like more and more of us are going to be able to be vaccinated in the short future, but I think that there are more looming things beyond that.

We have to make sure that we can pursue that transition back to normalcy. Right now in Massachusetts, we still have an unemployment rate that’s almost double what it was before the pandemic. We have to make sure that we don’t end up with a housing crisis as rent starts to become due as those eviction moratoriums fade away and people don’t have the money to pay their back rent.

We’ve lost so many small businesses and so many restaurants across the city, and they’re big issues that I’m concerned about and committed to focusing on because they’re still definitely going to be around in 2022.

In addition to that, I’m passionate about our city’s education system. In Dorchester, about 17% of the residents are school-aged kids. So one in five people are in school right now. I hope to one day raise kids in the city that go to BPS schools. and I think that all across the city, every student should have access to a high-quality public education.

That’ll mean more funding, yes, but it means we need to investigate any disparities across the district and address those as well. Are class sizes the same across the city? Are the buildings and the resources that are available to the students the same across the city? I want to talk to teachers. I want to talk to students. I think hearing from them themselves about where we can do better is going to be crucial to really drive that vision.

Public health is another core issue. District 3 is an interesting one. It’s at the intersection. It has Melnea Cass and Mass Ave., and it also has Long Island. So it has really both ends of the opioid epidemic that are still facing the city. I think that reopening Long Island is going to be a huge priority. We have to open it as quickly as possible, but doing that won’t fix everything. We have to make sure that we’re changing the conversation that addiction is a disease and we shouldn’t shy away from talking about it as such and that it’s a health crisis and a housing crisis. We have to have more facilities for folks to get treatment and then have a place to go once they’re out of that. We have to solve both or else we won’t solve either.

The final thing that I’m really passionate about and I think we should focus on is addressing the racial wealth gap that exists in the city. The Federal Reserve Bank of Boston released a study a couple of years ago that showed the median wealth of a white family in Boston is about $247,000 while for a black family, it’s just $8, eight single dollars.

There are many systemic factors that play into that from the burden of transit costs on our lowest earners. Sometimes that’s up to 33% of their household income that they spend on transit. The housing prices of Boston are almost two and a half times the national average, but our median salary is the same. There are so many factors that go into that that we need to address, and I’m committed to looking into those root causes and trying to address those as well.
How do you plan to achieve those goals?
It’s not going to be easy. We definitely have a difficult road ahead of us. Many of those initiatives involve having honest and difficult conversations with ourselves, and they involve money. So we need to talk about how some of these systemic injustices have led to the disparities that we’ve seen, but talking isn’t going to be enough.

The Globe reported a story just a few weeks ago that the city was only giving 1.2% of city contracts to Black- and Latino-owned businesses. Of the $2.1 billion, only 25 million went to those minority-owned businesses, and $2.075 billion still went elsewhere. So we need to be intentional about fixing these problems. Talking isn’t going to do enough.

I want to bring the community into the conversation. At the end of the day, I’m responsible to my constituents. They’re my boss and to do what’s best for them, I need to hear from them and I want to hear from them. Then we need to work together. We won’t be able to do this without public and private commitments and partnerships.

The city should absolutely lead the way in the change, but businesses across the city need to follow suit to commit to those core concepts of diversity and equity and inclusion and asking if what they’re doing is going to bring everyone forward or does it risk leaving some of their neighbors behind? In the end, I think that we’re all in this together, and so we have to make sure that we have each other’s backs.
How is your campaign different from other candidates running to represent the same district?
I’m really just focused on what my campaign is and what I want to commit to it being. So, I think first and foremost, it’s people-powered. I want to represent this district and to advocate for it and all of the amazing people that live here. I want to hear from them to understand their hopes, their fears, why they love this city and what keeps them up at night.

In addition to that, I’m a transplant. I chose Boston as my home, and I’ve made the intentional decision to build my life here. So I want the city to live up to the full potential that I know that it has. I moved to Boston, in part, because I knew that it was a place where I could live as my authentic self and where I could and did find love and marriage as a member of the LGBTQ community. That knowledge that Boston accepted me for all that I am drives me to continue to advocate for those that are still facing the burdens of inequality and those systemic injustices.

I’m also a young candidate, not just for this district, but on the council as a whole. I think that puts me in a unique position to really bridge the generational divides. I’ve been in the professional world long enough to see and know what all those that have come before us have done, but also understand that we’re really building a city for those that will follow after us. Almost half of the district is under the age of 34, and their voices are just as important as ever. I want Boston to be a city that will exist for my children and grandchildren and one that they can be proud of when they look to see all that we’ve done now.
What do you like about your district and what can be changed?
I love how diverse the district is. It’s so much of what I think Boston really truly is. It’s the South End. It’s Southie. It’s Dorchester. When you think of Boston if you’re not thinking about The [Boston] Garden. You’re thinking about District 3.

I think what we can change is that we have to make sure that the fabric of this district isn’t changed. We have so many big changes coming to the city and to the district. There’s Dorchester Bay City, Newmarket and Widett Circle and DotBlock— there are big developments that are going to change the face of the district.

I think it’s so important that we make sure that it doesn’t change the fabric of who can and who does live here because that’s so important to what this district is and I’m passionate about maintaining that.

Corrections: An earlier version of this story misspelled Dorchester as Rochester and misspelled Newmarket and Widett Circle.