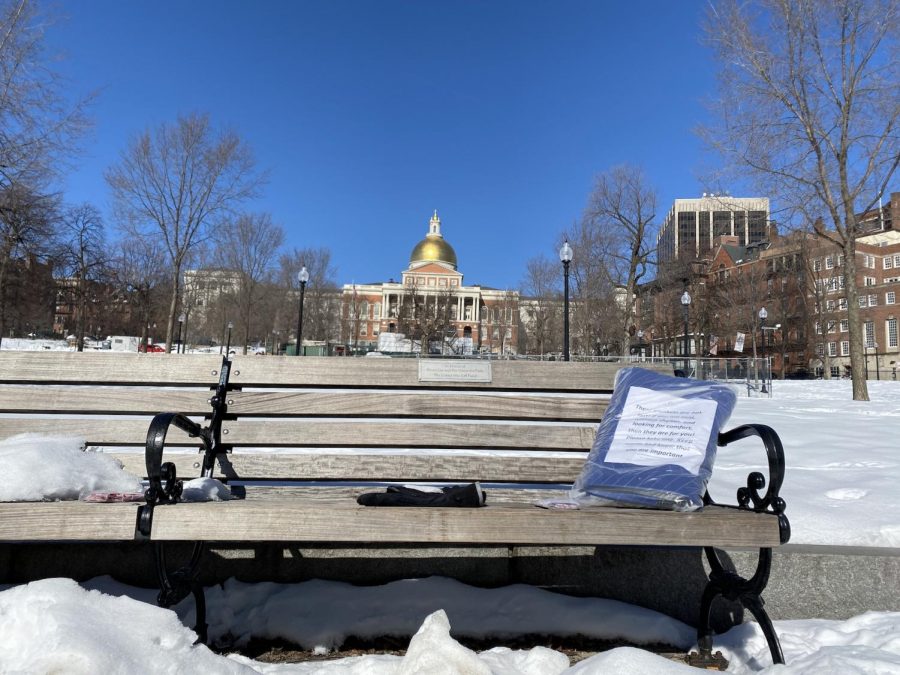 Blanket left by Sofia's Angels volunteers on a bench.

One of the most important things people need during the COVID-19 pandemic, according to Cathy O’Grady, is compassion.

O’Grady and her organization, Sofia’s Angels, have that in abundance.

Sofia’s Angels began almost by accident in 2014 after O’Grady, 54, was inspired by her young son’s desire to help the homeless. One day in February, she drove to Boston from her home in Watertown with three friends and left blankets with notes telling people braving the cold on the streets to take them if they needed them. O’Grady didn’t want recognition for this, but social media exploded with speculation.

Eventually, when O’Grady was contacted by local news outlets and even the Huffington Post,she saw this as an opportunity to spread more kindness.

“I didn’t want to be bragging, I wanted to inspire,” she said. “So, I saw people getting inspired and I said, okay, well now I’m gonna share.”

For the past seven years, O’Grady’s message has spread far and wide, and Sofia’s Angels has donated blankets and clothes, paid for groceries, left toys out for children at parks and performed a range of acts of kindness in Greater Boston and beyond.

Sofia’s Angels was named in honor of O’Grady’s mother, who died in 1997 after a battle with breast cancer.

“My mom, you know, she didn’t have much, but the little she had, she would always split it in half and give it to somebody else,” she said.

While Sofia’s Angels has continued to help around Boston over the course of the last year, leaving blankets and masks, the COVID-19 pandemic has forced them to cancel their largest fundraising event — their annual gala –usually held in April for two years in a row. Each gala, O’Grady said, usually brought in upwards of $15,000.

But COVID-19 hasn’t stopped O’Grady. Small acts of kindness are still possible and more necessary than ever, she says.

Recently, Sofia’s Angels answered the call when O’Grady posted on Facebook about a homeless man who needed shelter during an impending storm. People donated enough to get him a hotel room for a month and volunteered to buy food and clothing.

O’Grady said after spending the day volunteering in the city, she and her fellow angels would go out to eat in a restaurant, where they pay for another table anonymously, leaving behind a Sofia’s Angels card encouraging the recipient to pay it forward, and leave their server a 100% tip.

This was how Erin Stephens met O’Grady six or seven years ago. Stephens, 50, was a server at Cheers in Faneuil Hall Marketplace when O’Grady and a few friends came in after a day of hiding cash under merchandise in stores and on street corners. They asked her to choose a table for whom they would pay. She made nearly $400 in tips from Sofia’s Angels that day — her last shift before taking three months off for surgery, she said.

On her first shift back at Cheers three months later, Stephens recognized O’Grady’s vibrant red hair at one of her tables.

“I don’t believe in coincidences,” Stephens said. “I always say that God put Cathy in my life at exactly the time I needed it.”

This time, Stephens decided to learn more about these women. When O’Grady talked about Sofia’s Angels, Stephens knew she wanted to be a part of it. She posted on the Sofia’s Angels Facebook page about her experiences meeting them at the restaurant and reached out to O’Grady about getting involved.

Since then, Stephens has been travelling with O’Grady around the city of Boston regularly, handing out coats, blankets and other necessities to homeless people.

“It just made me look at the world differently once I met her. It changed my attitude from ‘everybody sucks’ to, you know, there still are some good people out there, and I can choose to be one of them, or I can choose to stay negative,” Stephens said. “Now that I walk around trying to be positive and do nice things for people, those are the people that gravitate towards me and it’s nice. Without Cathy I never would have learned any of that.”

O’Grady has turned up people’s lives at the right moment more than once. For Todd and Deidra Carlson, that moment came after an Emergency Medical Technician passed the family’s story on to O’Grady.

The Southbridge family began fostering their son Jayden in June 2013, when he was 3 years old and adopted him officially in 2016. Jayden, who had suffered a traumatic brain injury at the hands of his biological mother’s boyfriend, was blind, confined to a wheelchair and suffered from a seizure disorder. He required near constant medical attention, but it was love at first sight, according to his adoptive father, and they decided they were up to the task.

After O’Grady reached out to ask what they needed, Sofia’s Angels got them a swing that could accommodate Jayden so he could play with his brothers.

“It was a small thing in the grand scheme of things, but it was a big thing for them to be able to play together,” Carlson said.

O’Grady would reach out frequently and in June 2017, she was on the phone with Deidra Carlson when she found out that the family didn’t have a handicap van to easily transport Jayden, which made traveling with their whole family a challenge.

She started a GoFundMe, and with the help of coverage by Bob Ward of Boston 25 News and a few large donations, O’Grady was able to raise the necessary $50,000 within a week. This was a game changer for the Carlson family, who spent the summer taking day trips and making memories.

“When you’re just a regular person, it’s insane that someone is willing to give you such a big thing,” Todd Carlson said. “It was really life changing for Jayden, especially. For the last six months of his life, it really gave him some experiences that made for a good life worth living. We hope he found happiness with us. We hope he felt safe and loved, and as normal as he could.”

Jayden passed away on Dec. 21, 2017 after being transported to the hospital for an emergency ileostomy. He was 7 years old.

From small acts of kindness to grand gestures, O’Grady’s determination to help anyone who needs it has had a profound impact on many lives.

Ultimately, she just wants everyone she meets to feel like they’re important, as the messages on her blankets proclaim.

“I want them to remember that they matter,” she said. “Everybody’s got a story and everybody wants to be seen.”