The name “Nubian,” while honoring Black Bostonians, also sheds light on racist aspects of the city’s past. Today, members of the community hope this symbolic name remains a sign of change in the way people talk about this racialized history. 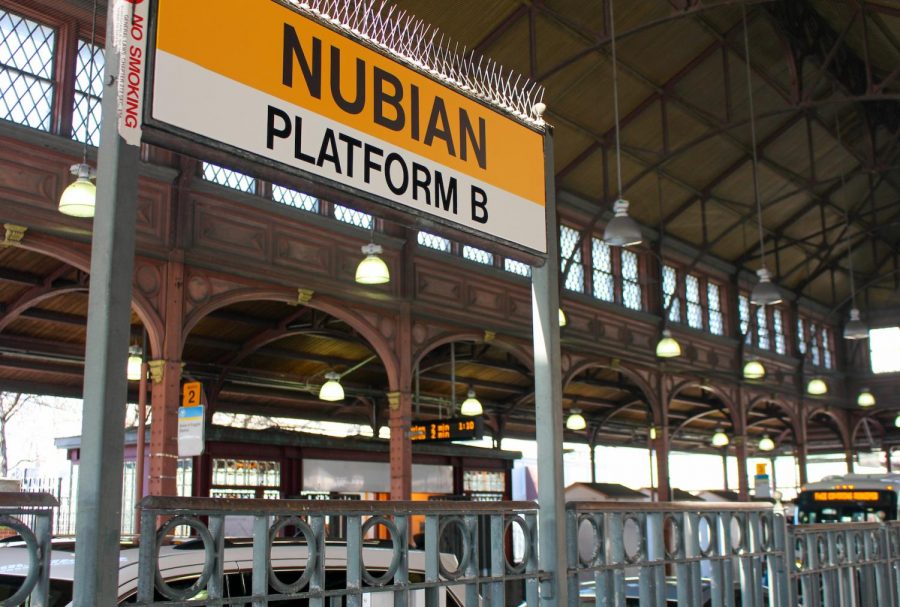 It’s been more than a year since the MBTA agreed to change the name of the former Dudley Station to Nubian Station, following the rechristening of the nearby the Nubian Square several months prior. This change was the result of a grassroots movement for a name that identifies this space as a center of Boston’s Black community.

The name “Nubian,” while honoring Black Bostonians, also sheds light on racist aspects of the city’s past. Today, members of the community hope this symbolic name remains a sign of change in the way people talk about this racialized history.

“Our time maybe has come, at least in this part of the city,” said Sharif Abdal-Kallaq, who has been a resident of Roxbury since 1970. “The people decided that they wanted to name Dudley Square Nubian Square. We certainly feel honored just by association of name.”

Abdal-Kallaq’s father, Malik Abdal-Kallaq, created the family business, A Nubian Notion, Inc. in 1962. Its barbershops and convenience stores promoted an Afro-centric aesthetic and created a space for celebration of Black culture. The flagship gift shop anchored the square from the corner of Dudley and Warren Streets until it closed in 2017, a loss felt by the community as trends associated with gentrification have started to reshape the neighborhood.

On Aug. 21, 2016, A Nubian Notion, Inc.’s more than 50 years of success were recognized in a “A Royal Tribute” presented by Origin Nile Studios at Hibernian Hall, a historic building on Dudley Street in Roxbury. Amidst the music, dance, food, and other celebrations, an initiative to change the name of Dudley Square was introduced by Sadiki Kambon and the Nubian Square coalition.

Proponents of the name change argued that Thomas Dudley, a former governor of the Massachusetts Bay Colony for whom the square was formerly named, played an instrumental role in the codification of the slave trade during his time in power. They offered “Nubian Square” as a better alternative, hoping to reflect the cultural heritage of the people who reside in the area, many of whom are Black or people of color.

“Black people have been living in Roxbury as long as Black people have lived in Harlem,” said Byron Rushing, chair of the Roxbury Historical Society. According to Rushing, the former Dudley Station and Square, “was always seen as a center of that community that Black people adopted when they came to Roxbury.”

After years of community organizing, the change was enacted after a vote in November, 2019 confirmed the majority of residents living in the neighborhoods around the square supported changing the name.

Apart from giving a nod to the local significance of A Nubian Notion, Inc., the name Nubian Square highlights the legacy of the Nubian Empire, one of the world’s oldest civilizations, which flourished in Northeastern Africa from 2500 B.C. into the fourth century. The ancient Nubians were agriculturists, merchants, goldsmiths, artisans, philosophers, warriors and architects. Today, their story is preserved by the wondrous art, pyramids, temples, and tombs that were left behind. These relics convey how advanced and ingenious the ancient Nubians were.

Many contemporary scholars now recognize that ancient Egyptians were indebted to cultures to the south, including Nubia, for some of their influential ideas. This may be a reason why some people of African descent embrace Nubia as a symbolic ancestral legacy.

“Nubia means that there was a time when African people controlled a region,” said Chester Higgins, who co-authored the book Ancient Nubia: African Kingdoms on the Nile. “They built a life for themselves that was envied, even by the Greeks.”

Higgins, an accomplished American photographer, has travelled through Sudan to capture images of the place that once was the center of ancient Nubia. His work was exhibited at the Boston Museum of Fine Arts in 2019 as part of the Ancient Nubia Now exhibition. This exhibition, according to MFA curator of Ancient Egyptian, Nubian, and Near Eastern Art, Denise Doxey, “sought to confront some of the ways in which Nubia’s history has been obscured and misrepresented over the last century–and the Museum’s own role in that particular story.”

“The largest collection of Nubian artifacts that has been uprooted and brought to America resides at the Boston Museum (of Fine Arts),” said Higgins. Despite the fact that the MFA is home to the “best collection of Nubian culture and Nubian civilization” outside of Sudan, the Museum has not always done the best job of highlighting these artifacts, or even attributing them at all.

According to the MFA, their former curator George Reisner, who led excavations in northern Sudan that were sponsored by the Museum in partnership with Harvard University, allowed his racial biases into his interpretations of the discoveries. The bulk of the MFA’s Nubian collection was unearthed in these archeological digs between 1913 and 1932.

In a bulletin posted at the MFA in 1918, Reisner alleged that the Nubian people owed their feats of civilization to the Egyptians. This conclusion was based on his own racist assumptions that the darker-skinned Nubians were incapable. According to Rushing, “they had mislabeled Nubian artifacts in public galleries at the MFA until about the end of the 1970s.”

The MFA said in a statement that it has plans for a permanent Nubian gallery, and that the 2019 exhibition “reminds us all of the importance of this collection and the urgency of this project.”

Despite the credit that Nubians were denied in the past, recentering the word “Nubian” in the public conversation offers a new generation the opportunity to connect with their African roots, in much the same way as A Nubian Notion, Inc. did for Bostonians in the 60s and beyond.

A year of Nubian Square: history, identity, and change, a mini documentary by Taylor Blackley and Maaisha Osman for the Scope.

Connecting with this shared ancestry by learning more about history related to Nubia, both recent and ancient, at home and abroad, is one way that Black Americans can celebrate this legacy.

Even though the MFA’s exhibition is no longer on display, a new gallery showcasing Nubian pieces is on the horizon. “Nubian is everything for enriching and uplifting Black and brown people of all ethnicities,” said Randy Rashawn, general manager of the upcoming art space, Nubian Gallery.

In June of 2019, Richard Taylor, a real-estate developer who is also engaged in community and civic welfare, bought the building which will house the gallery and event space for the purpose of preserving the neighborhood’s culture. Rashawn, who has worked tirelessly on the renovation, doing everything from sanding floors to painting walls to leading tours for patrons interested in booking space, laid out the plans for the gallery to become a space for artists of all mediums to collaborate. “Over the next year or two, we’re gonna have a space that not only represents us outside or in the name,” he said. “But when you come here, art is going to be sold to and for people who support Black and brown people.”

For now, a trove of ancient Nubian artifacts lies waiting in the basement. When the gallery opens, Rashawn hopes these pieces will help people today connect with the history of the Nubians, and take pride in everything they represent. He intends to situate the Nubian artifacts in a way such that visitors will be able to connect with their own culture and to “see the connection from Nubia to what is today; like the makeup, to style, to hair…all of these things that started with people just being themselves.”

Maaisha Osman contributed to the reporting of this story.

Correction: The original version of this story reported that the ancient Nubian Empire was in power from 2500 BCE to 1500 BCE, when in fact these dates apply only to Kerma, one of several Nubian kingdoms. Additionally, a quote from Edmund Barry Gaither that was mistakenly attributed to Denise Doxey was redacted. Finally, the Nubian artifacts in storage at the Nubian Gallery have no association with the MFA.