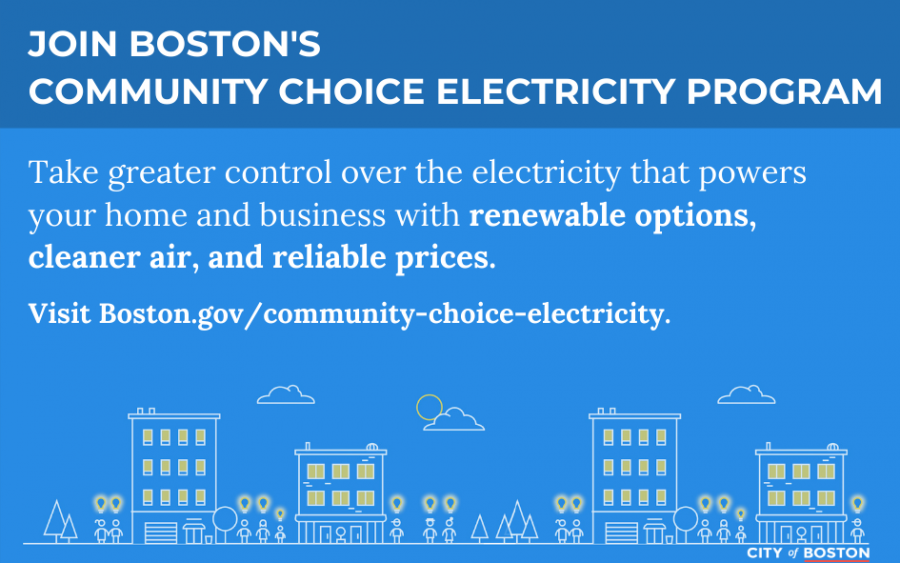 Mayor Martin J. Walsh announced that the Community Choice Electricity program begins on Feb. 1. Boston residents will benefit from renewable energy, stable prices and healthier communities, according to a press release from the mayor’s office.

The Community Choice Electricity (CCE) program is a key part of Boston’s Climate Action Plan, which aims to lower emissions and achieve carbon neutrality by 2050. The stable and affordable electricity rates offered in the program, the city said, was secured by leveraging the collective buying power of Boston’s homes and businesses.

The city said it had sent out notices to all Boston Eversource customers about the program and is hosting webinars in 10 different languages, ASL (American Sign Language), and CART (real-time captioning).

The Environment Department, since mid-December, has been hosting webinars in 10 languages for residents and businesses that will cover how the program works, customer benefits, electric rates and renewable energy offered, key features, and what to expect as the program launches.

The city said the CCE program is to provide over 20,000 low-income customers discounts on their electricity costs through the Commonwealth of Massachusetts’ Solar Massachusetts Renewable Target (SMART) program. The City of Boston, partnering with NextGrid Inc., will build 100 megawatts of new solar modules within Massachusetts. The incentives from the projects will result in an estimated $72 annual savings for the average low-income household, the city said.