Residents and city officials rally to save Melnea Cass trees 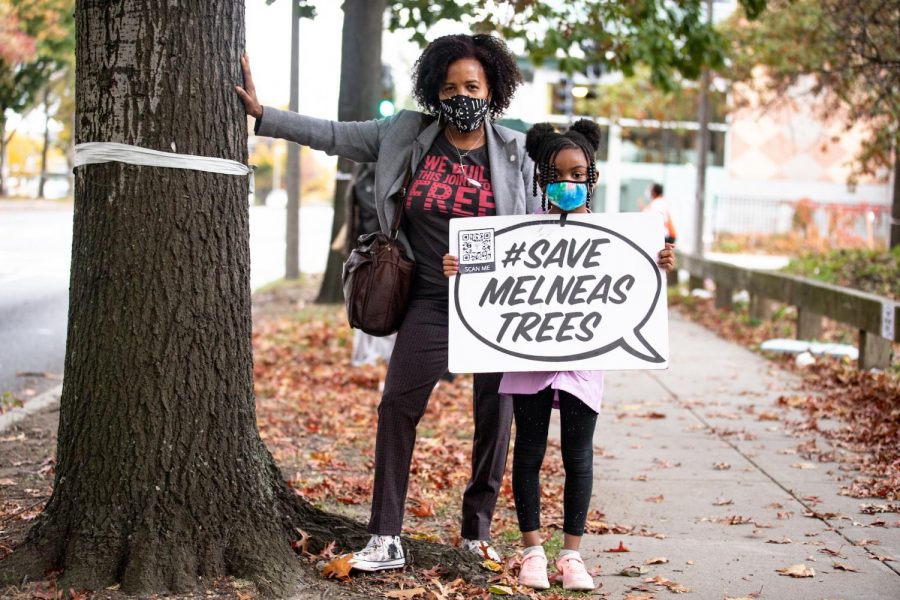 Boston city council president Kim Janey, and her granddaughter Rosie, at a protest Oct. 24, 2020, against the city’s plans to remove more than 100 mature trees along Melnea Cass Blvd.

Dozens of residents and activists gathered along Melnea Cass Boulevard Saturday, holding signs and chanting, “Save Our Trees!” in the latest rally against the city’s plans to cut down more than 100 mature trees in a project to widen the road.

The event was held by Friends of Melnea Cass Boulevard, a local group that, for nearly a decade, has organized to protect neighborhood tree canopy and green spaces in Roxbury, an area that is already considered a “heat island” by the city’s Climate Ready Report.

Residents and local representatives like City Council President Kim Janey have argued a redesign of the road should be able to improve transportation and protect the existing tree canopy, without choosing between the two. Janey also attended the rally on Saturday with her granddaughter to show support for efforts by residents to protect the canopy.

“Trees, and a tree canopy, are very important in terms of our public health. We see what COVID-19 has exposed in terms of the inequities that were already existing, and now the disparities are even wider,” Janey said. “So this fight to save the trees is in that context. It’s in the context of the Movement for Black Lives, in the context of a public health crisis that we have not seen in our lifetime, in our generation. Prior to COVID, we already had health disparities, and so to remove these trees is a racial justice issue.”

Attendees expressed their concern about the emissions from increased traffic on a wider road, disproportionate rates of asthma among Black and Brown Roxbury residents, and how existing respiratory conditions contribute to COVID-19 outcomes.

Mela Miles, a Roxbury homeowner and a director at Alternatives for Community and Environment, is also concerned about the “heat island” effect in the neighborhood — areas with more concrete cover and fewer trees to provide shade can experience temperatures dramatically higher than leafier neighborhoods just a few miles away.

“Without the trees, we can’t breathe,” Bill Singleton, president of the United Neighbors of Lower Roxbury group said. “They’re trying to take our land, and make it into something that’s not for us.”

The city’s plan proposed planting new trees to replace the canopy post-construction, but residents say saplings cannot remedy the loss of full-grown trees. The city issued a moratorium on the plan in September, pausing construction that was slated to begin this fall.

Riley Robinson of the Scope joined protesters on Saturday to capture key moments from the events in the photo gallery below.