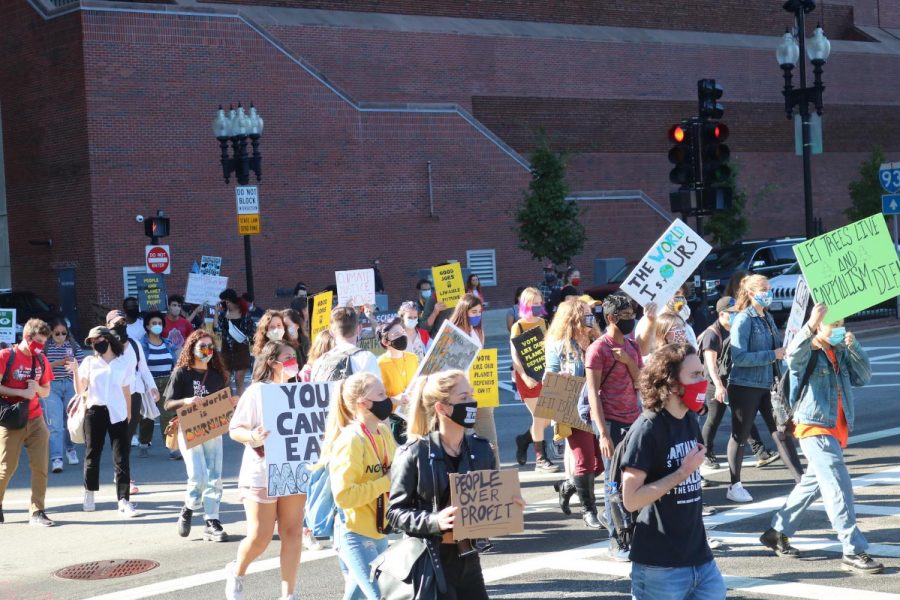 Protesters at the Climate Justice Strike

Protesters called for urgent actions to tackle climate change, support for an Indigenous climate plan, the Red Deal and consistent tribal consultation from the state at the Climate Justice Strike Thursday in front of City Hall Plaza.

The demonstration was organized by Strike Boston, a group that organizes strikes to demand environmental justice, and drew a large crowd of students, workers and at least 15 social justice organizations from around Boston.

Speakers before the march touched on multiple facets of climate change and its impact on residents of Boston.

“I really wanted to bring attention to everything that’s going on with climate change,” said activist Marissa Matson, who founded Strike Boston and organized the Climate Justice Strike with the Freedom Fighters Coalition. “I think one of the best ways to get the government to pay attention is to strike, so my intention behind it was to get as many people out in the streets as possible, out of work, out of school, and just demanding, ‘we will stop providing for this economy if we don’t get real answers here.’”

Although the demonstration was referred to as a climate justice strike, the attendees and speakers spoke about a wide range of issues and causes, including racial injustice in the United States, police brutality, indigenous peoples rights, workers rights, anti-fascism and socialism. The common thread was the notion that marginalized communities are the most deeply affected by issues of climate change and environmental health, and that Massachusetts’ elected officials have failed to act on climate issues.

During her speech, Matson listed out Strike Boston’s demands, which include demilitarizing and defunding the Boston Police Department by 10 percent, reaching net zero emissions by 2025 and updating Massachusetts’ public school curriculum to include more information about Indigenous peoples’ history, the history of white supremacy and environmental racism.

The North American Indian Center of Boston, which helped formulate the list of demands, also emphasized the need to implement the Red Deal, a climate change proposal from Native liberation group The Red Nation that centers the needs of Indigenous communities on environmental issues like oil drilling.

“We cannot have a Green New Deal, without the Red Deal,” said Jean-Luc Pierite, the president of the North American Indian Center of Boston. “We cannot stand by without the adoption of the Red Deal, which tells us that we need to divest from capitalism. We cannot have a green economy built upon extraction … We are not going to continue this legacy of extraction and colonization from Black and indigenous peoples. We are going to build a new system which serves all of us and that sustainable future.”

Numerous speakers also touched on the idea of climate justice, which aims to mitigate the disproportionate impact of both climate change and structural inequalities on marginalized communities.

“When settler colonial forest management practices cause wildfires to decimate the West Coast, climate justice means indigenous land stewardship and a red new deal,” said Kolya Shields, a representative from the Freedom Fighters Coalition. “In the middle of a pandemic that is disproportionately affecting people of color, climate justice means that we need to stop dumping hazardous waste in Black and brown communities, especially in the Massachusetts and Boston area.”

“When the societal upheaval from the climate crisis will further deepen the harms from racist policing and incarceration systems, climate justice means the abolition of the mass industrial incarceration system, and the police. When the pollution and climate crisis threatens our health, every single day, climate justice means universal health care,” Shield said.

Ashawn Dabney-Small, an 18-year-old city council candidate for Boston’s third district,  expressed frustration with local and state-wide officials on their lack of action on climate change.

Though the organizers were mostly students and young adults, the event drew attendees of all ages, including 67-year-old Scott Gilbert, who has been engaging in activism with the group Refuse Fascism since its inception in 2016.

“Millions of people hate what’s going on right now,” Gilbert said. “But they don’t see what we can do about it. And so we have a plan. Our plan is to start with thousands and get millions of people in the street, day after day, in sustained nonviolent protest to drive out this whole regime.”

Although the speakers raised many complex issues to solve, Shields and the other organizers remained hopeful about their goals and their ability to create a more equitable future.

“We do not all experience the effects of climate change equally, and it’s our responsibility to fight environmental racism and colonialism,” Shields said. “But we do all experience those effects of the climate crisis. And we do have generations of people who haven’t known a world without the fear of climate change, which means we have hundreds of millions of people around the world who can leverage their power for change.”