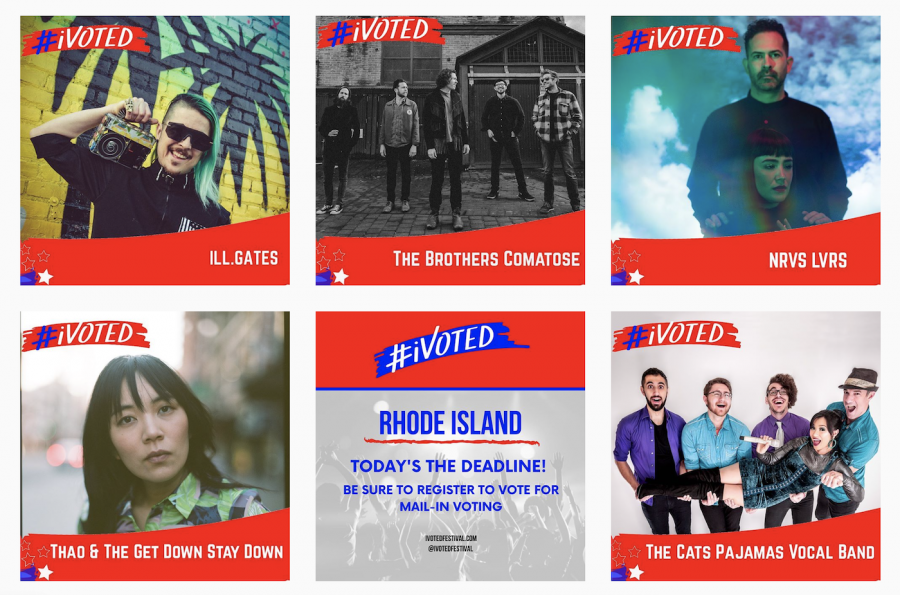 Statistics show that most young Americans don’t vote; fewer than half of Americans aged 18 to 29 voted in the 2016 presidential election. But young adults do love going to concerts of their favorite bands. What if there is a way to tie these two activities together?

The founders of iVoted did just that.

Since 2018, the non-partisan initiative has given anyone who sends a selfie outside a polling location or holding a blank, unmarked mail-in ballot free attendance to an online music festival with up to 600 performers.

The concerts are also open to people who aren’t eligible to vote, those who aren’t old enough or those living outside the country. There is also an option for them to send in a video message instead.

“Say you are not a U.S. citizen or you are ineligible to vote for any other reason, certain states limit felons from having the ability to vote,” said Melanie Shark, chief operating officer at iVoted. “That video option is their way of saying, ‘I’m not voting or I can’t vote, but I really want to celebrate voting with you guys. I want to be there, I want to see this artist who I am a huge fan of.’”

Shark said she thinks music is a common ground that can bring people together and create friendships.

“Music is very powerful in connecting people, and musicians are very powerful in what they do and what they encourage their fan base to do, [and that] can make much more of an impact than hearing it from anybody else,” Shark said.

Shark spoke to the Scope about what iVoted is about, this year’s festival, and why voting is more than just civic duty. The following transcript was edited for length and clarity.
What is the inspiration behind iVoted?
It was created in 2018 in reaction to the 2016 election and the low voter turnout that many swing states saw that year. Our founder Emily White, it especially hit her that her state was one of the lowest voter turnout states in the country. And also because the election was decided by such a small margin, she looked at that margin and said, ‘Well, if we put 10,000 people into a venue, then maybe people who liked to go to shows but don’t like to show up for voting would show up for voting.’

The safest option [to operate when the pandemic happened] was to just plan on it being online. So that is what we did. This wasn’t the goal, but we currently have about 600 artists all performing on Election Day and that turned out to be a world record for the largest single night digital concert.

The way that we booked bands was based on which artists were popular or trending in low voter turnout states and swing states. We started by using Chartmetric’s data to see who was trending and basically what started out as like a team of three volunteers turned into a team of 20 volunteers and a lot of students throughout the summer emailing people, pitching this as an idea and we gained slow traction and then quick traction. Now we have to turn people away because we are getting so close to the event and we don’t have time to onboard more artists and do all of the necessary steps.
Are young voters the main demographic focus of iVoted?
We are focused on the segments of the population that don’t vote. A lot of those people tend to be young people but it is open to all ages. We are not exclusively marketing to young people, but the avenues in which we are marketing, mostly social media, younger people are going to be aware of it.
Why did iVoted choose music to encourage voter turnout?
I guess back in the day, voting day was a very big celebration. Communities got together and had parties in the square and celebrated that we have the right to vote and election day was a huge, happy occasion where families would get together, friends would get together. That community aspect of it has changed a lot. iVoted is not exclusively music. This year it is mostly music, but it is named iVoted Festival because the idea is to get people together to celebrate voting.

It is the songs that artists play but it’s really the artists themselves and their fan bases. Our tagline is, ‘Revolutionizing voter turnout through the power of fans and community.’ It is really getting artists who have very strong followings.
What do you think makes iVote unique in raising awareness of the importance of voting?
There are a lot of organizations that celebrate awareness and registering and there is tons of information out there. It is on every social media feed: ‘Have you registered? Have you registered?’ So most people know that they should register to vote or have heard it before.

We follow the individual through from registration to the Election Day. The idea is to keep in on their minds because there are a lot of barriers. You have to register, you have to figure out where to mail it in, and figure out if you should go in person and there are a lot of things to navigate especially because everything differs state by state.

Following the person all the way from registration through to the very last day that they have to vote is a little bit unique. The most unique thing is on that day, making it a celebration like ‘Today is Election Day, we all voted, isn’t that so exciting?’

And then for people who are not voters yet or voting yet, it is to turn them into future voters and make it into a really positive term like, ‘I am a voter’ even if you can’t vote yet, you can still identify as a voter.

Artist participating in the iVoted Festival this year

Due to COVID-19, many voters can’t go to a physical polling location, especially if it is crowded. How are you tackling this issue?
There are a lot of options for people to gain access to the festival. The main one is by sending in some sort of selfie outside of your polling place or at an early voting location and there are legal limitations to that. You need to be a certain distance away from the actual voting place, you can’t take a picture of yourself at the voting booth. It is either by sending a selfie [from outside of your polling place] or a selfie at home with a mail-in ballot. We don’t want to see any personal information on it, we definitely don’t want to know who people voted for, that is not what we are about. It is just the fact that people voted at all.
Is it more difficult to organize the festival online than doing it in person?
We have challenges. One of them being we are a virtual team and we are spanning across all timezones. We have most of our team on the East Coast, we have some on the West Coast. I’m in London, I was in Washington D.C., and that was easier timezone-wise.

Pretty much none of the people that are working together right now have ever met in person. We’ve all pretty much developed our professional connections to each other on Zoom and Google Hangouts and Slack and Slack video. It is sort of uncharted territory as far as how to function as an organization that has only ever worked together online, but I think we are doing a good job at that.
Do you decide what songs artists will play?
No, it is really up to them. They are given very loose guidelines from us. What we want most is for them to engage their fan base and get their fan base voting.
Now that Election Day is less than a month away, what does your work look like?
We are just working really, really hard. We have no lack of people willing to help, which has been so great. We have so many volunteers, a lot of artists and of course it is a huge task to try to wrangle that many people but I think we are doing a pretty good job of that so far.

Right now, we are just focused on making it a really good user experience for everybody. Our launch was on Oct. 1, RSVP just went live, what we are focused most right now is getting people to RSVP and send in their selfies and be aware of how they can gain access to the festival.