Andrea Campbell talks policing reform, education and what she would do differently as mayor

"I am a firm believer that the government needs to do a better job of listening and talking less. I'm often uncomfortable when it's just like: ‘Come on and talk for 20 minutes. I'm like ‘No, can we have a conversation?’" 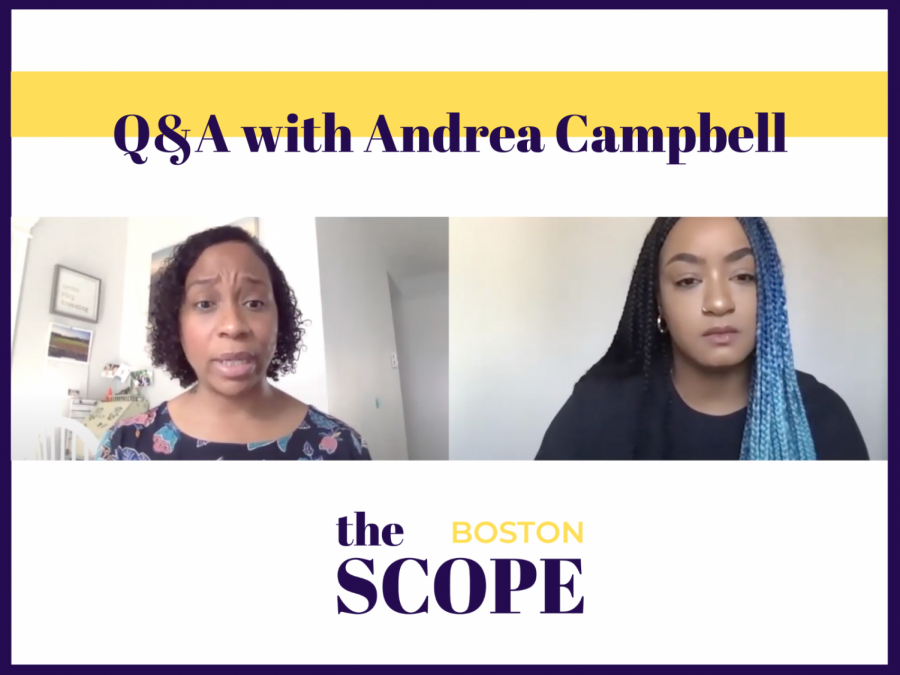 The Scope’s reporter Lex Weaver spoke to Boston City Councilor Andrea Campbell who recently announced she will run for Boston mayor in 2021.

Campbell grew up in Roxbury and South End. A councilor representing Dorchester and Mattapan and parts of Jamaica Plains and Roslindale, she has focused on issues surrounding criminal justice, policing reform and racial justice while in office.

In July, she filed an ordinance with two other councilors to create a civilian review board with authority to review, investigate and resolve complaints of police misconduct submitted by the public or other officers and personnel.

Campbell’s campaign touted it secured $50,000 in donations 24 hours after its launch.

Campbell will be running for Boston mayor against City Councilor Michelle Wu, who announced her run a week earlier. Incumbent Mayor Marty Walsh has not yet to announce whether he will seek reelection.

Watch the Scope’s interview with Andrea Campbell below.

﻿
Don’t have time to watch the whole thing? No worries, here’s a quick answer key to your most pressing questions:

On criminal justice and policing reform
‘I’m all for taking [overtime money from the BPD budget] and giving it to programs that are doing the work on the ground, with respect to the root causes of violence. We’re also talking about demilitarizing our police. Right now, I have an ordinance before the council with Councilor Arroyo talking about tear gas, etc…’

The city councilor also mentioned the large amount of vacant lots within the city, many of which fall under her district.

‘For the past couple of years, we’ve been saying we have all these vacant lots in my district, and across the city of Boston, that could be activated for community purpose. [We could] set up businesses, help entrepreneurs have a space, space for young people, youth, housing, you name it. There are [also] numerous studies out there that say vacant lots often correlate with higher incidence of crime in a community. That’s an idea that came from convenings we hosted in the community.’
On Education
The councilor initially pushed for remote learning because of concerns about how the coronavirus was disproportionately affecting communities of color, but also said that education needed to be more accessible, as a portion of BPS students do not have regular access to the internet.

‘I’ve also focused a lot on the digital divide; It has been shocking, I think to many, that the divide exists. There are many in the city of Boston who still do not have access to a good internet connection, who do not have access to hardware and software that we take for granted to do our work and to engage with one another. So there, there needs to be an immediate push to close that gap. And we’re seeing that’s relevant, not just in the education system, but so many other systems, including our jobs.’
Addressing issues on Mass & Cass
‘I actually sent a letter, I think within like 48 hours [of meeting with residents and advocacy groups near at the “Methadone Mile”], to the mayor and to the governor to say, one, we need immediate responses to the sanitation issues down there. It is unacceptable that we don’t have temporary toilets or places for folks to bathe. We were able to activate and mobilize vacant city-owned spaces or other spaces for folks who are dealing with COVID-19, to give them testing, a place to quarantine. Why can’t we do the same for individuals down there? We have an opportunity to do that, so that was at the top of the list.’

Campbell is in favor of reopening the Long Island Bridge.
What would Campbell do differently as mayor that she couldn’t do as a councilor or council president?
‘I often say, we are in a strong mayor city, whether we like it or not. And with the stroke of a pen, a mayor has the ability to change policy, practice, and put forth legislation…I actually put forth an action plan as a councilor, and I think it was received well, because folks have never seen something so specific on transforming a system; but my frustration is [that] I need the district and the mayor to adopt it. Or, at least to work in partnership with me on that.’
On housing
‘If you go across the City of Boston now, we are dishing out millions of dollars for housing projects, including for our seniors, veterans and vulnerable populations. That’s because of the CPA and the push for that when it wasn’t popular, maybe even when the mayor didn’t necessarily want to do it at the time.’

Campbell, in partnership with City Councilor Flaherty, pushed for the passing of the Community Preservation Act, or CPA, when running for her seat for office.
Who is Andrea Campbell and why is she running for office?
Fueled by the loss of her twin brother, who died from an autoimmune disease while in the custody of the Department of Corrections. Councilor Campbell poses the question:

‘How did two twins born and raised in the city [of Boston] have such different life outcomes?’ That is the question that still fuels this work, it will continue to fuel my work in this next endeavor of becoming mayor of the City of Boston, and I’ve never lost focus on that question.

If anything, now, I’m realizing that every system has some inequity. I’m not afraid to talk about Black and brown people who have to deal with the brunt of those inequities because of the foundation of this country, which said to us, right, that we are lesser, that we were inferior, that we should be marginalize, and that we should be oppressed because of the color of our skin.’