“We're the first ones to be called on for votes,” organizer Monica Cannon-Grant said. “And the last ones to be protected.” 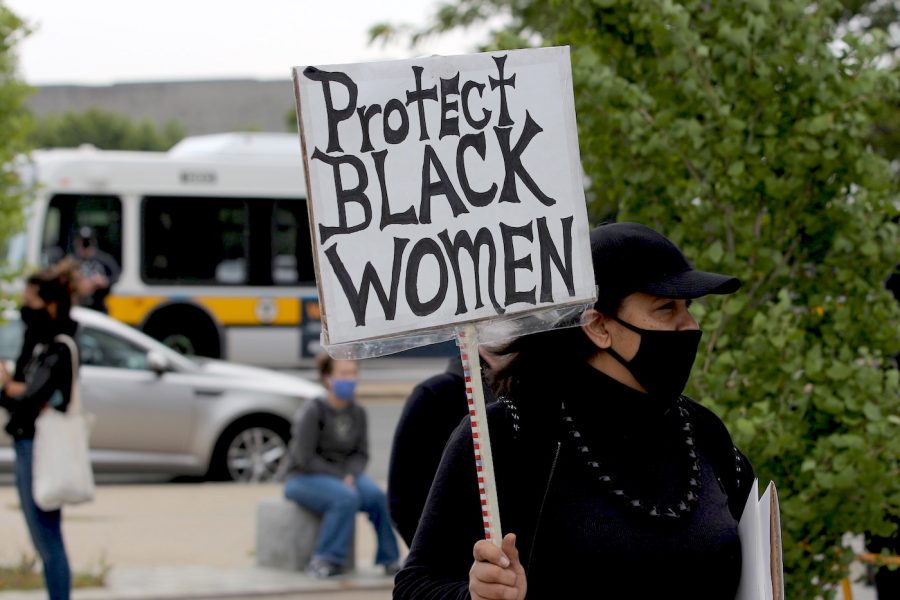 Over 80 people gathered at the Boston Police Department headquarters last week as a number of Black women speakers share their experiences of being left behind by the social services and criminal justice systems.

Activist Monica Cannon-Grant, the founder of social impact center Violence in Boston, an organization aiming to assist victims of violence in the city with housing, food, clothing and safety, was the organizer of the event.

Cannon-Grant is no stranger to the dangers of being a Black woman, especially one with a platform. She said her decision to organize the rally came from her experience dealing with harassment as a Black woman activist.

“About four and a half years ago, I got on the radar of a Black man and a white supremacist group who decided to attack me,” she said. “And for the most part, it was trolling on social media. And then more recently, they began to ambush and show up places where I was. And it became dangerous to my family and I.”

She was advised to call the police department and file a report to obtain a harassment order, but she was reluctant to do so. “I’m a black woman and calling the police may very well mean that I die or someone else dies,” Cannon-Grant said.

Eventually, Cannon-Grant said she was able to file a harassment order through a Black officer she knew but the report was then “leaked to the supremacist group who have been attacking and trolling me,” she said.

“The very entity that everybody is telling us we’re supposed to depend on to protect and serve is part of the problem,” she said.

Aside from the increased risk of being killed by the police, Black women from all walks of life are subject to a variety of discrimination: in healthcare, where practitioners often don’t take their symptoms and concerns seriously; in education, where they are more likely to be reprimanded and fed into the school to prison pipeline; and across the board. Furthermore, over 40% of Black women will experience domestic violence in their lifetime, compared to 31.5% of all women, according to the Institute for Women’s Policy Research.

Cannon-Grant, together with other Black activists across Massachusetts, has been advocating for the state Legislature to pass a police reform bill that would limit police use of force, diversify police departments and ban racial profiling, among other demands for reforms.

“When Black lives are under attack, what do we do?” a Protect Black Women Rally speaker called out, to which the crowd responded, “Stand up, fight back!”

Youth activist Carrie Mays of Dorchester, who spoke at the mic, came to stand in solidarity “with other Black women, other Black people, for Black Lives.”

“As a country, we’re in a detrimental position, and Black lives right now are at risk the most,” Mays said. “Like Malcolm X said, Black women are the most neglected and the most unprotected women in America. So I definitely felt when Monica was saying that women get attacked a lot, and they don’t get listened to. And then when they do share their experiences of injustice, they get gaslighted.”

The rally comes at a time of outrage, six months after 26-year-old Breonna Taylor was shot and killed in her home by Louisville police officers, who had yet to be charged in the case. Less than a day after the rally, a grand jury announced that none of the three officers involved would be charged for causing Taylor’s death. As hashtags like #JusticeforBreonnaTaylor and #SayHerName trends on social media, Cannon-Grant wants people to care about Black women not only in their deaths but when they are alive.

“The only time there’s any concern is when we’re a hashtag,” Cannon-Grant said. “And I really wish that the media and the community as a whole would stop waiting for us to become a hashtag to actually give a damn about the harm that we face every day.”

Throughout the summer, catalyzed by the murder of George Floyd in May, cities across America have exploded with protests and rallies demanding police defunding and legal action against officers who have harmed Black citizens, and despite dwindling media coverage, the protests never stopped. Attendee Alexa Rivera is a regular activist at Black Lives Matter rallies in her hometown Arlington.

“Every day, for the past 110 days, we have been out there. And we have been protesting at 6-7 to honor the lives of Black people who have been lost due to police brutality, white supremacy and racism in our country,” Alexa Rivera said. “And I’m proud to say we have not stopped.”

Danny Rivera of Mattapan, who grew up watching Cannon-Grant’s community engagement, attended the rally to stand in solidarity with Black women.

“I’m here because Black lives do matter. And as a Black man, acknowledging the simple fact that [Black] women are the most unprotected in America,” Danny Rivera said. “I’m here to amplify the voices of Black women and let them know that they are heard.”

Black women supporters and allies can support the cause by showing up for protests, holding their peers accountable and donating to Black women-owned community organizations, Cannon-Grant said.