"Racial justice is central to our campaign. The reason why I have been in office and why I'm seeking to become mayor is that Boston should be a city for everyone." 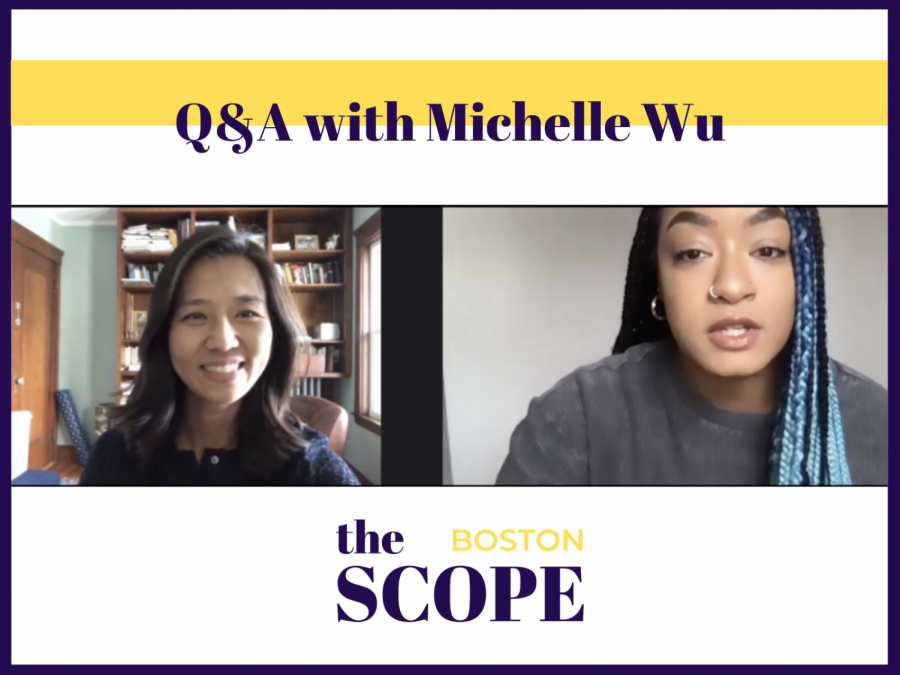 Wu has served on the city council for seven years and was the first Asian-American woman to serve on the Boston City Council. As a city councilor, Wu has championed issues surrounding housing inequality, transportation and climate change.

She has advocated for free public transportation in Boston, proposed a Green New Deal and Just Recovery plan for Boston and has pushed to abolish the Boston Planning and Development Agency to give residents more power over developments.

Wu’s campaign reported Tuesday that the campaign raised over $100,000 in donations in the first two days of her candidacy.

Watch the Scope’s interview with Michelle Wu below.

Don’t have time to watch the whole thing? No worries, here’s a quick answer key to your most pressing questions!
On Black Lives Matter and racial equity
“Our goal is to attack the racial wealth gap from every angle, [having] great schools to ensure that every single child in our city has access to incredible education in a city of tremendous resources, and making sure that our development process is fair and accountable, and that everyone shares in the prosperity of our city,” said Wu, current Boston city councilor at-Large. “We know that Boston has grown tremendously over the last seven or eight years, and yet these gaps have gotten bigger.”
Addressing the crisis at ‘Methadone Mile’
“I think we need to accept our role as the regional service provider and find things that we could be doing immediately, not just waiting on some sort of a dream of a bridge being built that I don’t actually believe will connect to dramatically changing the dynamic and situation today,” Wu said. “Certainly there are lots of kinds of city services that have been added to address the symptoms of what is happening. Needle pickup that has been very responsive; our public works employees working extremely hard to get right out there as soon as something’s reported. There has also been a law enforcement response that I think should be more of a public health response, but the underlying issue is that we need to treat this public health crisis and housing crisis.”
Pathway to affordable housing
Wu wants to hold city developers accountable on their commitment to providing affordable housing, as many do not follow through after securing a permit. She also suggested a “vacancy fee” for those who buy up housing units but don’t inhabit the space.

“We are going to ask for resources from you, to pay to offset the impacts of your decision of not having community there and not having people actually living there,” Wu said. “Those types of resources need to go to build more affordable housing, and then it’s not enough just to say how we are going to build and increase the supply of affordable housing. How are we also going to stabilize people who are living in the city today.”
On transforming MBTA services
“… when ridership is down so much, they’re not going to be able to make up the loss in operating costs through collecting fare. This is a moment to really rethink everything. We have seen with a pandemic just how much public transportation is a public good. And so we need to start financing it, funding it and treating it that way,” Wu said.
On policing
“I’ve put a proposal on the table [with] Councilor Lydia Edwards and Councilor Julia Mejia that would divert 911 crisis response calls away from law enforcement to an unarmed community safety force that would be trained and in a fully professional force, but trained in mental health counseling, substance use counseling, maybe also address traffic stops and other situations where right now we’re asking police to show up, but it’s not within [the police’s] expertise; it’s not efficient or effective and it leads to sometimes devastating outcomes and we’ve seen that right here in Boston, as well,” Wu said.
Just who is Michelle Wu, and why is she running for mayor now?
Wu shared that she started her campaign early in order to ensure authentic and effective community building, so that Boston can be a city built together by its people.

“… I’m someone who never thought I would run for office growing up,” Wu said. “I’m the daughter of immigrants … as a mom of two boys, I really feel the urgency to make sure that we’re leaving the best possible city to them and to all of their peers and their generation and the generation after.”
Full Video Transcription:
ENGLISH
ESPAÑOL
MANDARIN
TIẾNG VIỆT