Cambridge Bike Give Back collects, fixes and gives away bikes for those in need

Established by three friends, the group's goal is to help people without means of transportation to get around the city and help "kids be kids again." 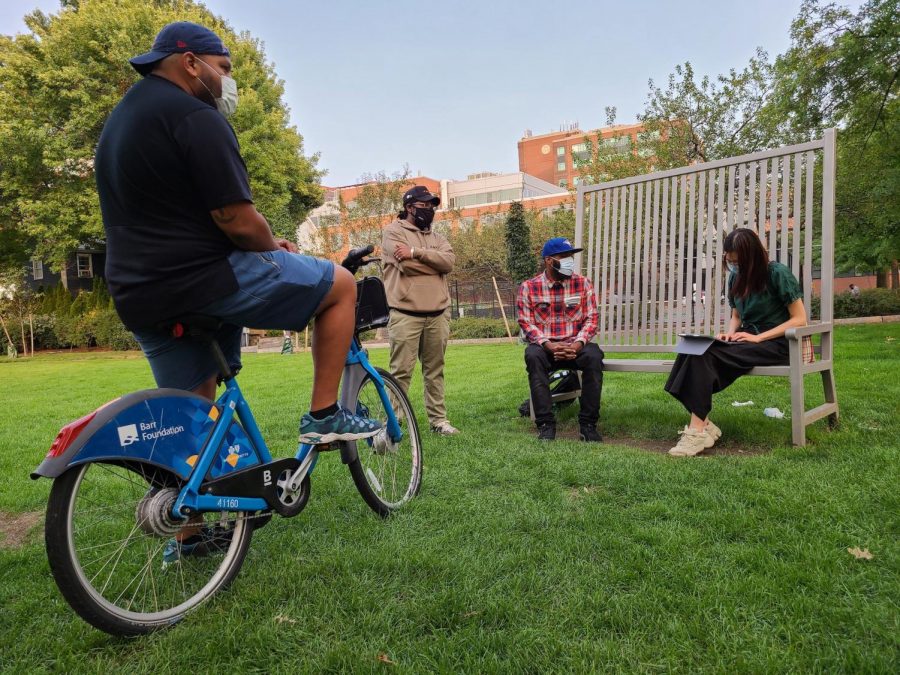 The COVID-19 pandemic has made both exercising and travelling more restricted for those who don’t own a car as gyms are closed and using public transportation risks exposure to the virus. So a banker, a chef and a data entry clerk came together to collect old bikes, refurbish them and give them back to those in need at Cambridge Bike Give Back.

Lonnell Wells, Jesse Castillo and Sean West established Cambridge Bike Give Back following the death of George Floyd. The group aims to help those without a car or money for public transportation get around the city. Since founding the organization, they have collected more than 60 bikes and given out 44 bikes.

They receive donations from community members through bike giveaway events but have also been paying out of their own pocket to get new bike parts as well as storing the bikes.

The Scope sat down with Wells, Castillo and West to talk about their initiative, how they were motivated to start the project and who they have been able to help.
Q: What’s your inspiration behind establishing the Cambridge Bike Give Back?
Castillo: From the pandemic and the quarantine, everybody just started bicycling because the gyms were closed. I noticed how bicycling brought people together. I thought [a bike] was like a good gift that everybody should have.

Castillo: People need transportation and just all the things that bicycling brings, to give you the opportunity that you need to go somewhere farther, instead of walking or paying to get on the bus, and it’s just like a means of transportation. Not everybody has the means to purchase new bikes, and then a lot of people don’t even have the knowledge to fix them. So this is something that we can give.

West:  It also gets people out of the house after being locked up in there for however long it was, getting the blood flowing and getting back out. It lets kids be kids as well, because I feel bad for the children to be locked up. Getting people back out you get a sense of community again.
Q: What was the goal you set when you first started?
Wells: We were doing a lot of things.. So the first event, our goal was just to give out 7 bikes and that was a success. In the next event, our goal was to give out 11 bikes and that was success. So we’re accomplishing our goals. We’re setting goals we know we can reach and then we’re accomplishing these goals. And  in the most recent event, we gave away 27 bikes.

West: We gave away 27 bikes with helmets backpacks with supplies, tablets, books, we were giving out food and tuning up people’s bikes, fixing brakes and stuff for bikes for people
Q: Who do you aim to help with the refurbished bikes?
Wells: So the beautiful thing about what we’re doing is the bikes go to whoever needs it. We’ve seen people who just are getting back to the state or they don’t have a job and they don’t have money, but they need transportation. So sometimes it’s for them. Sometimes, it’s for kids who can’t find that bigger bike. We see kids out here, some of them can’t find a bigger bike, but we have the perfect bike for them. So we’ll bump him up on the list and we’ll get him his bike. So it’s awesome. There are a whole variety of situations where we give out the bikes.
Q: How many old bikes do you usually receive each month?
Castillo: It has been going up and down, it’s all based on donations. And it’s just word of mouth and social media right now. The bikes we receive are not perfect. There are a lot of bikes that sit in the backyard damaged and people don’t know how to fix or they don’t want to fix it. So for those bikes, we need to have to put a lot of work into it.


Q: Are the bikes given away to people free of charge?
Wells: So when we’re giving bikes away, that is always free of charge. When we’re fixing people’s bikes, our mechanic Michael usually offers the service free of charge, especially if it’s a kid.
Q: What do you do with bikes that cannot be fixed?
Wells: We  take all the parts, we take the tires, anything that we can take from it, we’ll take those and put them on another bike. And then the stuff we don’t need we will recycle it.
Q: If there are not enough bikes for people signing up to get one, will there be a waiting list?
Wells: As far as the people who didn’t get a bike, they’re part of the community, we are still very much involved in the community. So the kids or the parents who didn’t get a bike, they’ll let us know. And then we’ll get them a bike. We should be having a small event in between now and Halloween to give out a couple more bikes for the kids who didn’t get one. But we notified all the people who didn’t get a bike and who absolutely needs one and they will be pumped up on the list.
Q: Do you have any plans to set up classes for people interested in biking or learning the mechanics of bikes?
West: We’re working on developing a program for kids. If we are talking about a perfect world, with all the funding that would be available to do so, we would have, let’s call it a “mobility center.” It will be a place where we teach kids about bike safety, how to keep your bike held up and repaired and maintained.
Q: How have you seen the bikes help people in their life?
LonnelI: I see a lot of kids out here, we gave away 44 bikes. First, in this neighborhood, there were already a lot of kids on bikes, but now it’s like, nobody’s left out. For all these kids, it was probably like three out of five of them had a bike, and now it’s like five out of five of them have a bike. So it’s been looking really nice. It’s looking like how we grew up out here. Everybody’s on bikes and having fun.
Q: What are you most proud of doing at Cambridge Bike Give Back?
Castillo: We love watching the reaction of the kids when they get the bike, watching the people around the neighborhood. One time, we gave a bike to a girl, she was paying $2.50 each way to go on the train. And then, when she saw that we’re giving away bikes, she asked us how much but it was given away for free. Her reaction  just having something like that was probably the best.