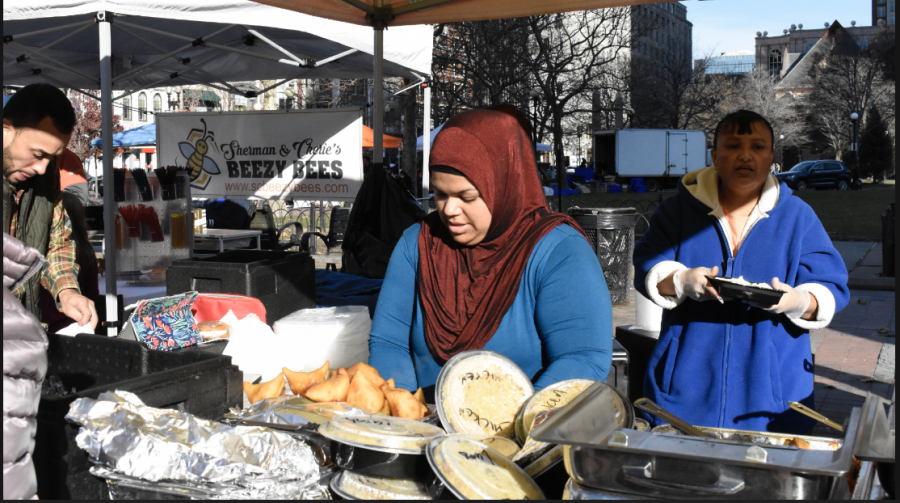 Mehzabin "Mitzy" Shaikh, owner of Guru the Caterer, serves hearty lunches to customers at the farmer's market in Copley Square.

This story was updated April 7, to include new information about how Guru the Caterer is adapting to COVID-19 measures.

Mehzabin Shaikh’s stall is one of many unique local businesses showcased at the Boston farmers market in Copley Square, always crowded as customers enjoy the irresistible aroma of rich, spice-infused curries from freshly cooked Indian food lingering in the air.

But what many customers aren’t aware of is the journey of the woman behind her small restaurant, Guru the Caterer.

Shaikh, co-owner of Guru the Caterer, located in Somerville and Downtown Crossing, caters much more than just food. She provides opportunity and job training for her workers, who lack education and English communication skills.

Shaikh was born in a small village in rural Gujarat, India. Her family owned a chicken farm, which was their primary source of income, but there was barely enough profit to sustain a living. With financial troubles and lack of resources, Shaikh never had access to proper education and, because her siblings were too young to help, she had to work on the farm with her parents. Her family saw the chance to migrate to America as an opportunity to escape their uncertain and hard life in India, and in 1998, when Shaikh was 12, they moved to Boston.

“Basically, people who come from our culture, like the women, are not supposed to work,” Shaikh said. “They just take care of the house, as being a homemaker is their responsibility.”

Shaikh belongs to the Gujarati-Muslim community which happens to be a minority both in India and America. In India, it’s a Muslim community in the large and predominantly Hindu state of Gujrat. According to Shaikh, being a woman in a minority religious community is equivalent to being a sub-minority, as expected societal ideals are very conservative, especially when it comes to women and gender roles.

Shaikh’s father passed away shortly after the family’s arrival in America and Shaikh had to take on responsibility for her mother and two siblings. “My mom never had been working,” she said. “So, I’m the first person in my house who actually obtained a job at the earliest age possible.”

Despite continuing to face financial barriers in America, worsened by communication difficulties, Shaikh’s school teachers encouraged her to pursue her dreams.  “My English was less, but there were these teachers in my school who helped me when I was struggling and that created the opportunity for me,” said Shaikh. Now, she has a Bachelor’s degree in medical laboratory technology from UMass Lowell, and is licensed to practice. “Sometimes it just takes one person to do a little help, and that small help can change someone’s life,” she said.

In 2015, when her partner wanted to start a business, they purchased restaurant Guru the Caterer. The employees of the restaurant were all female immigrants from India. After taking over the business, Shaikh oversaw the staff and kitchen. She became a part of these women’s lives and realized that most of them could not speak English or did not have any qualifications. For these workers their job at the restaurant was their only source of income.

“I realized there was no security for these women. They were working at my restaurant, but in case I did not own it, and did not want to keep them hired they would have just lost their livelihood,” she said.

Inspired by her own life experiences, Shaikh decided to help. She started training her workers by teaching them English and also about the health regulations required by the  restaurant industry. Shaikh also helped out her staff with their federal forms and applications for health insurance and other official procedures that are often mostly in English.

She got all her workers certified in ServSafe® a food and beverage safety training, a certificate program administered by the U.S. National Restaurant Association.

Shaikh hires many people who require a job, regardless of their nationality. She said many of her friends or co-workers often send people to her who are looking for jobs. These people are usually new immigrants, people too afraid to get a job because of their language consciousness or lack of qualifications.

She said her agenda is not just helping immigrants, but all people who struggle due to something like a language barrier. “I hire people, who don’t get hired by others,” she said.

“I know how hard it is to start a new life. And if I can help them in that journey, I can make a difference and that’s all that matters.” Shaikh said.
UPDATE: Guru the Caterer and COVID-19
Shaikh and her staff at Guru the Caterer have, like many non-essential businesses in Boston, had to adapt during the coronavirus pandemic. They have already provided paid leave for older workers and those with a long commute. Only staff that live near the restaurant are working, and Shaikh herself is making the no-contact deliveries from their Somerville location. Customers can order and pay online through delivery apps like Grubhub, or through the restaurant’s website.