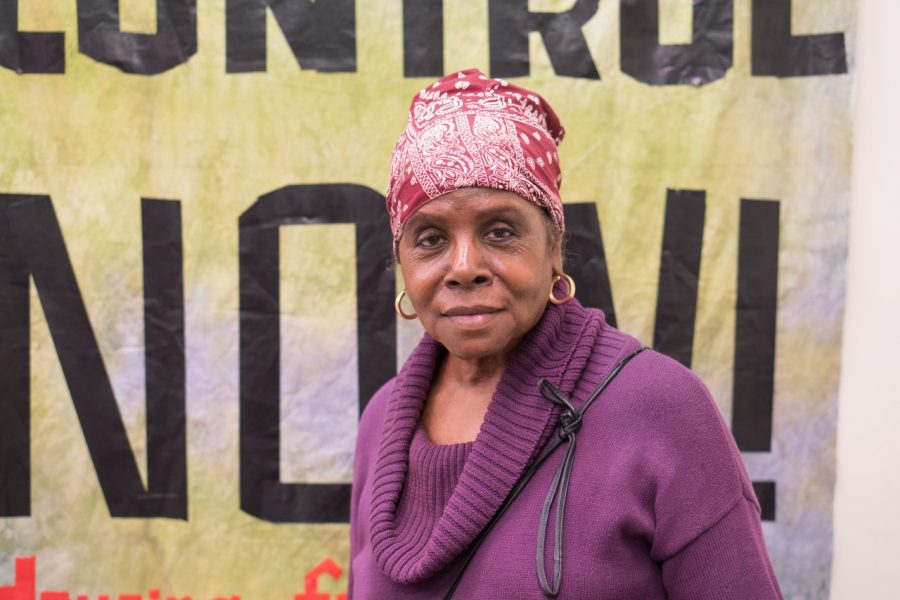 Every week in Jamaica Plain’s brewery district, Judy Burnette hand-picks local and national news about the housing crisis and, standing in a packed, 90-person meeting hall, shares this information with Boston’s discontented tenants.

“I read everything,” says Burnette, chuckling. “Hell, I send stuff to people at 3 a.m.”

Her audience includes members of City Life/Vida Urbana, a grassroots nonprofit, whose motto, “Stand Up, Fight Back,” encapsulates the group’s approach in confronting  housing policies they consider abusive and non-inclusive. These Tuesday night gatherings are a time for the group to organize and educate members.

An hour before the meeting starts, Burnette, who joined City Life in 2018 to fight a 50% rent increase on her apartment, hands out meeting agendas and workshop information. Now an organizer, she also asks new members if they have any questions and welcomes them to the community.

As Massachusetts lawmakers consider a bill that would reintroduce rent control, after banning it 26 years ago, equitable housing advocates, like those at City Life, have become increasingly active, ramping up public efforts to make their voices heard in support of the bill.

Burnette took time out of a recent meeting to speak to the Scope about her role, what she thinks about rent control and the state of housing in Boston. The following transcript has been edited for length and clarity.
Q: How did you end up at City Life/Vida Urbana?
A: I’m a retired woman and I started living at a place called Our Lady’s Guild House in 2008. It was run by this Catholic convent. Everything changed on January 1, 2012. The former mother superior had passed away, I guess, in 2011. So, when this new person came in, she came in with a different vision of what that place should be. She immediately told everyone in the building that their rent was going to go up $100 a month. I handled it. But there were a lot of women there who were not working, who were on fixed income. The panic in the building was just palpable because some women had been there for 30 years.

In 2014, they told us we had until July 31, 2018 to leave, which gave everyone four years. But the mother general, as she’s called, continued to intimidate people. She had hired a woman who was a big red-headed bruiser. She was loud. She was profane. And the women living there, let’s just say they weren’t like that. They were scared.

I was talking to a friend about this and he said, “Go to City Life.” That was on a Monday; I was here Tuesday night. When I told them my story, they jumped on it with the sword and the shield. And I’ve been here ever since.
Q: What is the sword and the shield?
A: The sword is the action. Like, let’s take Our Lady’s Guild House again. In August of last year, we did a big rally in front of Mark Roos Realty company [their property manager] on Commonwealth Avenue along with a petition of over 1,000 signatures. It embarrassed him. They don’t expect pushback. They can’t handle it. So that’s the sword.

The shield is the attorneys protecting and informing the rights of the people. We have many of those at City Life. And, of course, the contract. Getting it in writing and making [the landlord] sit down and talk to you face-to-face.


Q: So, you were a client at first?
A: Yes, but I was very active and met a lot of new members. In November 2018, they asked me if I would apply for a job as organizer. So, I applied. I’ve now been working at City Life since December 3, 2018.
Q: Now that you’re an organizer, what do you do here?
A: One of the things that I do, along with my colleague Gabrielle René, is work with Section 8 tenants. This is a section of the federal budget that comes through [the department of Housing and Urban Development]. It subsidizes housing for low income tenants. When I started working here, I didn’t know anything about Section 8 – I think I had heard of it but I didn’t know what it was. I also didn’t know that the people on Section 8 are considered freeloaders. People look down on them. When really, if people had any sense at all, they’d apply for Section 8.

Part of the problem with Section 8 is that people are ashamed. My job is helping people understand that there’s no shame. In comparison to the federal budget, they’re getting peanuts. There’s no shame in taking what’s offered.
Q: Why choose to fight for rent control?
A: Because housing is a human right. Housing is everything. I mean, if you don’t have a place to live, nobody can send you anything and you can’t apply for a job. Also, peoples’ self-worth is tied to it.

Rent is something that is out of your control. Which means that somebody else is in control of your life and your self worth. Particularly if you’re of a certain age or if you have a family. Without rent control, landlords can change your rent from $900 to $1,700 just to take you and put you out on the street.
Q:What do you think the root of the housing crisis is?
Greed. I think that when rent control was voted out and banned in 1994, it was because of real estate agents and moneyed landlords. And the reason they did that is that they wanted to be able to raise their rents as high as they want to – the hell with everybody else. Getting rid of rent control was the first step. Since then, as you can see, the rents have gone so high. I think it’s a matter of greed and misplaced values.