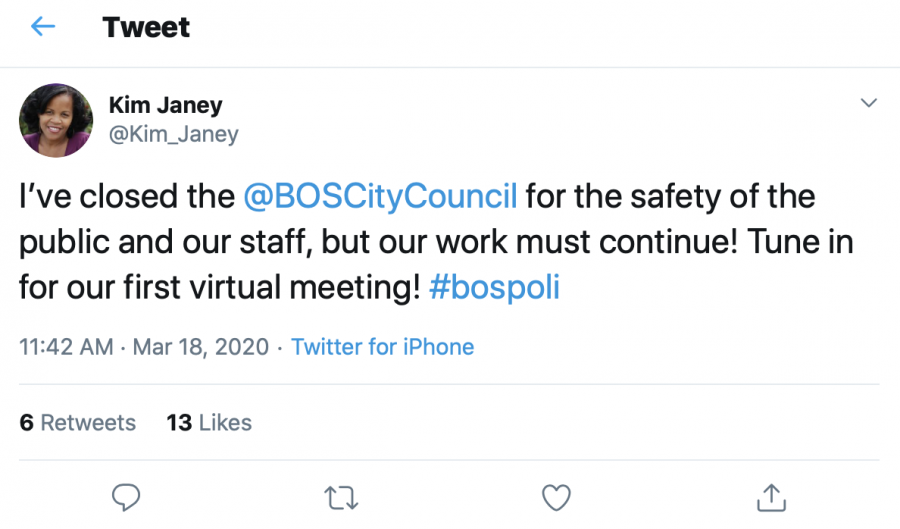 Boston’s City Council meeting took a different format this week. In response to COVID-19 coronavirus, City Council President Kim Janey announced earlier today that this Wednesday’s meeting was going to be held online and closed to the public. Half of the councilors were present at City Hall, while the other half were attended via the video-conferencing app Zoom. There are some technical difficulties that Janey hopes to fix moving format with this new meeting format.

I’ve closed the @BOSCityCouncil for the safety of the public and our staff, but our work must continue! Tune in for our first virtual meeting! #bospoli

City Council is officially closed and all hearings and meetings will be held virtually until further notice. Councilors can be reached via email or phone.

During the meeting, the following dockets were presented and discussed:
Docket #0458
An order was proposed to have a hearing to discuss the City of Boston’s preparedness on the risk of contracting Coronavirus (COVID-19).

The hearing was rescheduled to Monday, March 23 at 1 p.m., and the docket will remain in the Committee of Public Health until then. No further action was taken.
Docket #0482
The City of Boston was authorized to accept a $15,600 grant from the Drug Stewardship Program, awarded by the Medication Education & Disposal-Project.

The grant, which is to be administered by the Police Department, will fund the collection and disposal of expired and unwanted household medicines. This docket was passed.
Docket #0481
The City of Boston was authorized to accept $50,000 for the FY20 First Responder Naloxone Administration Grant, from the Massachusetts Department of Public Health.