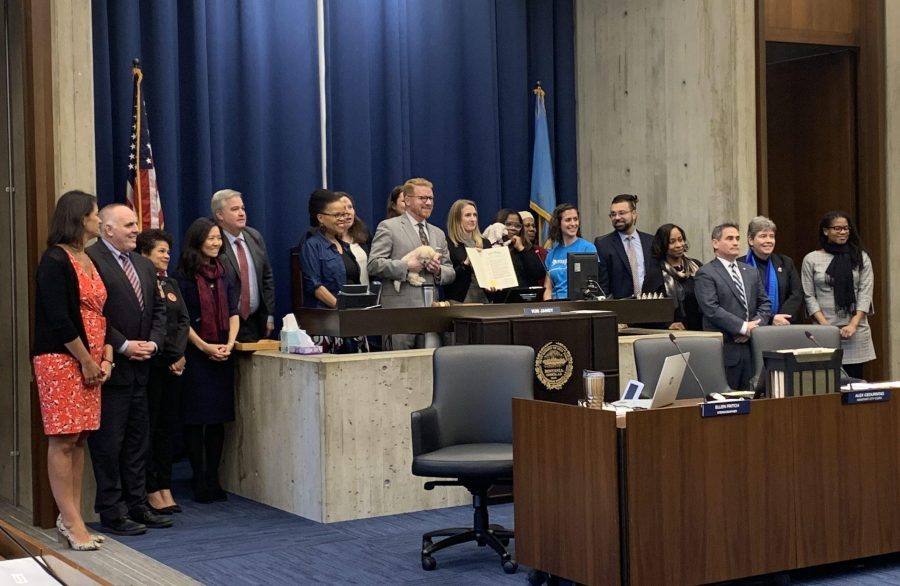 All Boston City Councilors were in attendance for the meeting at City Hall Feb. 26. Photo by Jordan Erb.

All councilors were present for the Boston City Council meeting on Feb. 26, 2020, where the following dockets were presented and discussed.

Councilor Flynn proposed a resolution to celebrate African American veterans during February, which is Black History Month. Councilor Lydia Edwards was a co-sponsor of the resolution.

“I am asking this body to suspend and pass this resolution recognizing the incredible contributions, sacrifices, dedication of our African American veterans and the service they’ve played in our country’s history,” Flynn said.

The resolution was passed in council.

Councilor Julia Mejia offered an order for a hearing regarding the economic empowerment of income-adjusted parking tickets.

Mejia proposed an order to examine the possibility of income-adjusted parking tickets, which would vary based on the recipient’s income.

“That’s not to say I’m here to break any laws, or challenge the system, but I do think we have an opportunity to really explore how we can make parking tickets a little more effective for the financial situations that a lot of our residents are facing here in the city of Boston,” she added.

Councilor Edwards said she didn’t think if she was ready to create income-adjusted parking tickets — reduced based on income — but that she was willing to further explore the issue through a hearing.

The docket was ultimately passed and referred to the committee of city and neighborhood services.

Councilors Mejia and Michelle Wu offered an order for a hearing discussing the status of late-night MBTA service in greater Boston.

Mejia and Wu brought forth an order for a hearing to discuss implementing more late-night operation of the MBTA in Boston, stating that late-shift workers need more public transportation options.

“This is an issue that has economic implications across multiple levels and has been frustrating because city council has been part of the conversation for years as well,” Wu said.

Councilor Edwards mentioned that a ferry servicing East Boston is expected to be implemented soon, but that extended MBTA services and hours are needed.

The docket was passed and referred to the committee on planning, development and transportation.

Councilors Mejia and Edwards offered an order for a hearing on public hearings as they relate to government accountability and accessibility.

Councilors Mejia and Edwards proposed to have a hearing on the City’s hearings, claiming that the current system doesn’t have the type of accountability and accessibility needed to fully engage the public.

The hope is to remove barriers to engagement, make city council more accountable and accessible to Boston’s citizens.

The docket was passed and referred to the committee on rules and administration.