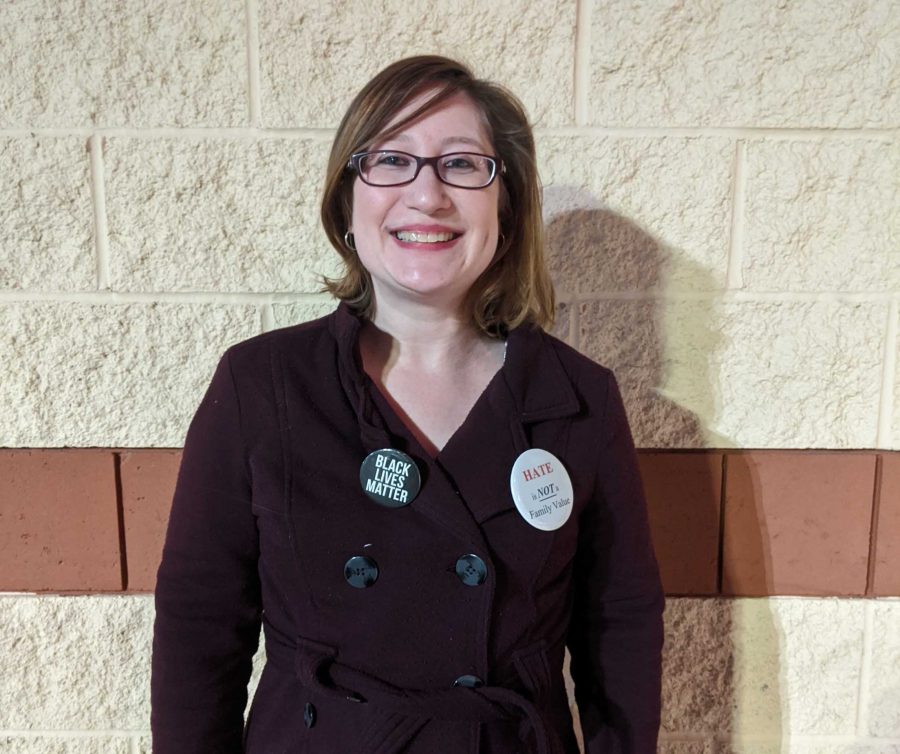 Banderob is a co-admin for the Wilmington group and has worked with the state-wide “Everything is Free” network for four years. Photo by Jin Kim.

When Rachel Banderob, 37, moved to Medford in 2015 it was her first time living in her own apartment. She owned little kitchenware, and though the dining room had moody, dark red curtains, it still felt empty.

After scrolling through the Facebook group “Everything is Free Medford,” she eventually found a “give” listing — a framed photo of a dark red flower — that suited the sparse room. She claimed it instantly and still cherishes it as her first gift from the community.

Two years later, after regularly engaging with the community, both online and in-person, she became the first co-administrator of the Medford group. Today, Banderob is a co-admin for the Wilmington group and has worked with the state-wide “Everything is Free” network for four years.

The original group started in Medford, and now has over 4,000 members, but there are 17 subgroups for neighborhoods in and around Greater Boston currently with about 32,000 members and 29 admins.

When Banderob isn’t arranging  swap-meets in the Facebook group, she divides her time between her daytime job as a project assistant at an engineering company and freelance copy editing.

Rachel Banderob spoke with the Scope about her motivations and vision for the “Everything is Free” network. The following conversation has been edited for length and clarity.

Q: Could you describe what the “Everything is Free” network is?

A: It is a group mostly north of Boston, and it is town specific. It is a way to share and a way to give. If someone has something they’re no longer using that they want to give a good home to, they can post it. As the name would suggest, it’s all free. There’s no money exchanged in any way. There’s no, you know, bartering, bidding, trading. It’s really just giving without expectation … Caring, looking out for members of the community and being the essence of the best part of what community means.

Q: What do you believe was the inspiration for creating “Everything is Free?”

Q: How has the group spread from Medford?

A: We’ve had groups just keep popping up in different towns. I think it usually happens that someone from Medford will move to another town and then they’ll say, “Okay, I need an ‘Everything is Free’ for this town now that I’m not in Medford anymore.” We love seeing it grow and spread across the whole area.

Q: Why do you think “Everything is Free” has been so successful?

A: In the practical realm, people need stuff. So many people with either a high mortgage or high rent, there’s not anything you can cut off your budget list and get for free. For the vast majority of people that’s a life changer.

Q: Why did you decide to become an admin of “Everything is Free?”

A: I wanted to become an admin because I was inspired by it. I loved seeing the generosity. I loved seeing people help out, people step up when other people needed anything. I wanted to take the load off of the main admin as well so she wasn’t carrying everything herself. But it was just a blossoming community that I was honored to be a part of.

Q: What are some of the main responsibilities you have as an admin?

A: Screening new members. We screen profiles to make sure that the person requesting to join isn’t in any of the local groups, because you’re only allowed to be in the one in the town that you live in. Then just generally being on call [for] when a member has a question or there’s a squabble going on — trying to keep an eye on it to be able to intervene and make everyone happy.

Q: Could you describe one of the best things you’ve seen happen in the group?

One of the things that made me happiest in the world was seeing the group develop and grow and going just from things to help. People reaching out saying “I need help” and the community just rushing to help them no matter what, big or small.

Q: What is the most random item you’ve seen posted?

A: Half a red cabbage.

Q: Are there any hardships or concerns you have as an admin of the group?

A: The way it is now, the people who are able to be on Facebook 24/7 get the most stuff. That’s definitely a grievance. When people do overclaim, one of the admins will reach out with a very kind “share the wealth” reminder. “No-shows” is definitely a member complaint; they just get frustrated when people just don’t show up.

Q: Do you have any long-term goals?

A: A rapid-response network and to be able to mobilize to get people things they need, and just continuing to build the community.