Changemaker: Tony Richards, founder of No Books No Ball 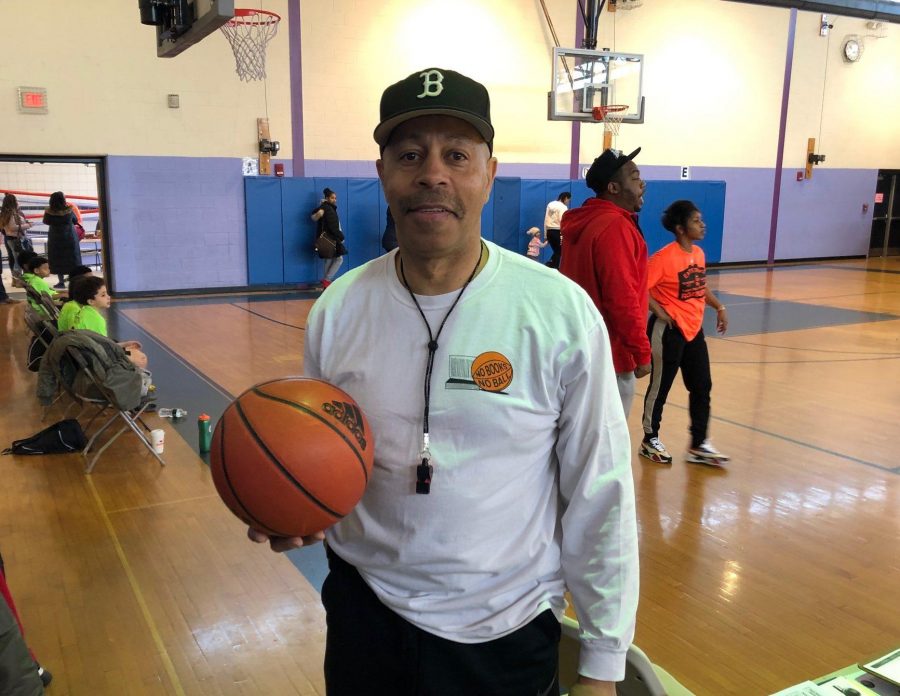 Tony Richards sets up for practice at Orchard Gardens School, once the students have proven they're just as hardworking in the classroom as they are on the court. Photo by Rich Trombetta.

Tony Richards was not allowed to play high school basketball because of his poor grades. While this would be a setback for some, it inspired his life’s work, to give children across Boston academic support so that they can pursue their athletic dreams.

In 1991 Richards, a life-long Dorchester resident, started the nonprofit No Books No Ball to provide support and opportunities for Boston’s youth both in school and in sports. Since then, thousands of children aged 6 to 16 have participated in the program, first at the Roxbury YMCA and now at Orchard Gardens School, arriving on Friday evenings or Saturday mornings with their sneakers on their feet and homework in their hands. Before being allowed to enter the gym, players must show report cards and completed school assignments, and some attend a one-hour reading program before games.

While there is a strong emphasis on classroom education, No Books No Ball also strives to help children and adolescents with social skills and self-confidence by providing them mentorship opportunities, the chance to participate in community service projects and, above all, give them a safe place to play.

The Scope interviewed Richards to learn more about his work. The following conversation has been edited for length and clarity.


Q: How did you come up with the name?

A: When I was in high school I was ineligible to play for my high school team because of my academics. So it always kind of stuck with me that if I ever had the opportunity to educate kids of how important [school] is, that would give me a way to give back and show kids how important that is, to have that balance, as a student athlete. And then the concept of if they didn’t comply with the books then they couldn’t be in any basketball … that’s where that vision came from.

Q: What do you do to support students academically?

A: We make sure all kids have to have a copy of their report card before they even show up. If they have some academic shortfall, then we’ll create support services to help them with that. We’ve started a literacy program with our youngest, so every Saturday before the game, they’ll come to the auditorium and they’ll do some reading and then they’ll have an assignment that’s due every following week before the game.

Q: What do you offer besides the reading program?

A: One of our mottos is we teach more than basketball. I say that because so many of them won’t even play ball after they’re in high school. We have a trip planned to Suffolk County jail. That’s giving these kids a look at their choices. We’ll have some folks come in and talk to the kids about homelessness and what pathways lead to homelessness. Then we’re going to go around the city with some sandwiches, socks and gloves and hats and help feed some of the homeless in the city.

Q: Who are some of the more prominent players that have gone through?

A: We had a Shabazz Napier who’s in the NBA now. Bruce Brown is another one of my kids in the NBA, he plays for the Detroit Pistons. Jalen Adams went on to play with the New Orleans Pelicans. One of our kids just went out to California to play with LeBron James’ son. He’s playing with that Catholic school that LeBron James’ and Dwyane Wade’s sons play on. They play on the same team together.

Q:  Just to connect the dots, if his academics aren’t where they’re supposed to be…

A: He doesn’t get that call. And a lot of those kids, like I just mentioned, were all decent students. And they understood the importance of academics to be able to get recruited to college and they’d get that opportunity for some of those prep schools in place. Because if you’re ineligible you’re not a scholarship player. If you are ineligible to play for high school that means you can’t play to showcase your talents to a college recruiter.

A: Exactly. I want kids to really identify the importance of that early rather than later, and the earlier they’re exposed to it, the more it will stay with them as they go throughout their basketball career.

Q: So what’s next? What’s your vision? What if a million dollars fell out of the sky?

A: If we had more funding we could definitely do a lot more. I would look for a building that could accommodate all what I do. The basketball, the classroom space, the mentorship pieces, the academic component, it could allow me to do so much more in one building where I control the operational movements.

Q: How does this impact your life?

A: Well, when I see the value of what kids get out of it, how they’ve gone on better pathways. You just want to leave that pathway for the community that we grew up in. You want to leave it a little better than you found it.