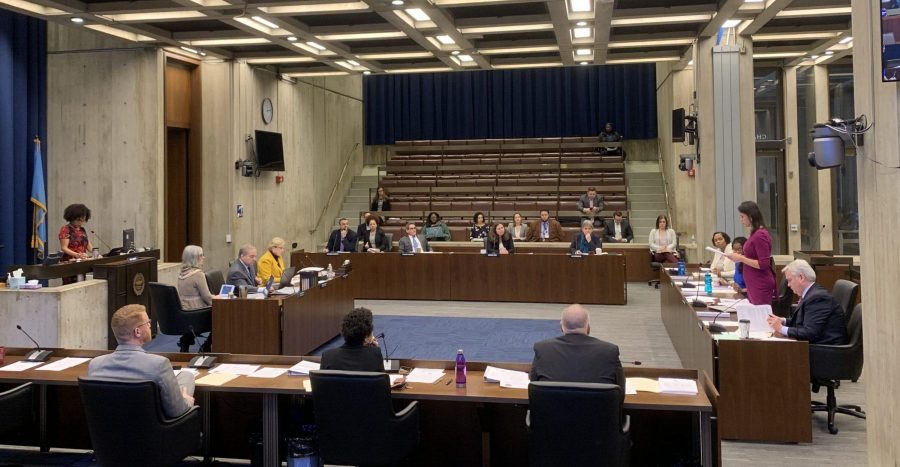 BuildBPS, school safety and the 2020 Census were all on the agenda at this week's Boston City Council meeting in City Hall. Photo by Jordan Erb.

All councilors were present for the Boston City Council meeting on Jan. 29, 2020.

The following dockets were presented and discussed:

Councilors Annissa Essaibi-George and Matt O’Malley offered an order for a hearing regarding BuildBPS.

“BuildBPS is an ongoing project to rebuild our schools,” said Essaibi-George, adding that BuildBPS is an opportunity to build greener public buildings and accelerate the City’s goals of being carbon neutral by 2050. It was also noted during the meeting that nearly 73% of Boston’s carbon emissions come from city-owned property.

The docket was passed unanimously and referred to the committee on education.

Councilor Essaibi-George offered an order for a hearing to analyze security measures taken to protect school environments from threatening situations.

This docket, according to Essaibi-George, is an opportunity for councilors to discuss improved infrastructure and safety practices among Boston’s schools. Improved safety measures would include ensuring every classroom has doors that lock, practices that protect students from active shooter situations, providing safe routes to school, and protection from bullying, active drug use and discarded needles.

Docket #0274 was referred to the committee of education.

Councilor Essaibi-George offered an order for a hearing regarding the implementation of policy requiring all Boston Public Schools to have a full-time mental health and social or emotional support specialists.

“Given the fact that so many of our youth have childhoods rocked by gun violence, homelessness, or family instability, it’s clear that a full-time mental health professional in every single school is increasingly necessary,” Essaibi-George said.

The docket was referred to the committee on education.

Councilors Ed Flynn and Kim Janey offered an order for a hearing to discuss security at high-rise garages in Boston.

Over the past seven months, according to Flynn, there have been several incidents involving deaths from high-rise garages in Boston, including one near Northeastern University’s campus. Parking garages are often accessible by the public with minimum barriers or safety measures, Flynn said. More measures could be taken to provide security on high-rise garages, as well as mental health support.

The docket was referred to the committee of city and neighborhood services.

Councilors Flynn and Michelle Wu offered an order for a hearing to discuss ways to promote a complete and accurate count for the 2020 Census in Boston.

“The census 2020 is one of the most important issues we’ll face as a city council,” Flynn said.

Not only does the census determine the number of congressional members the state has, but it also establishes the amount of federal resources that come into a city or state, according to Flynn. The hope is to count every Boston resident in this year’s census.

“What is important about the census is that everyone counts,” Flynn said. “Everyone is important.”

Docket #0280 was referred to the committee on census and redistricting.

January is designated as national Braille Literacy Month. Flynn and Edwards stressed the importance of and connection between Braille literacy and personal independence. The resolution would show the city’s support for Boston’s blind and visually impaired community.

The resolution was adopted.