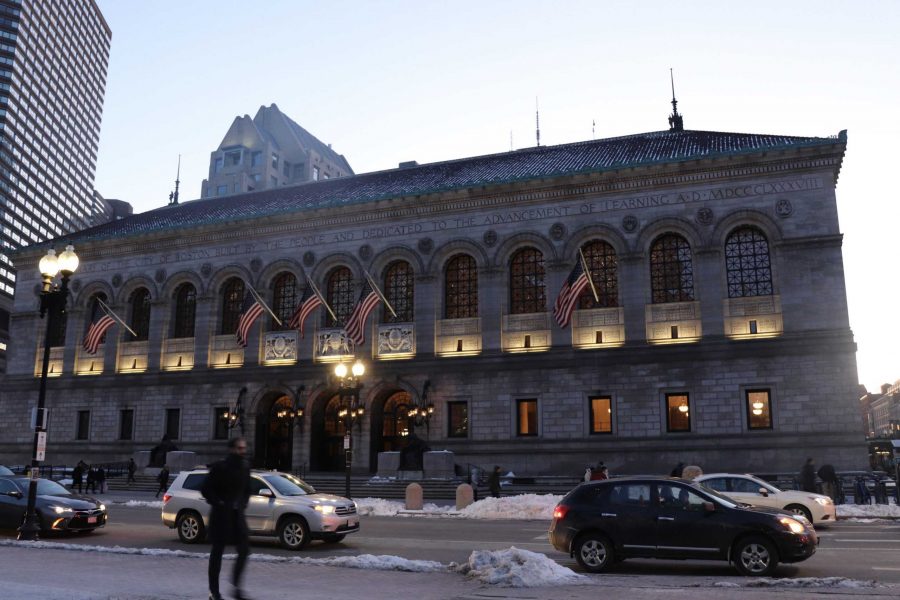 By Avery Bleichfeld and Paige Stern

For those without affordable access to high-speed internet, institutions like the Boston Public Library can provide the WiFi connection that they need.

With 250 wireless access points throughout all their branches, BPL provides a space for internet users to access digital services with a consistent reliable connection.

Yet, sometimes it’s not that simple.

Some patrons have schedules at work or school that don’t leave enough time to access BPL internet, others are limited by caring for kids who may not want to sit around while a parent or guardian does work online.

Now, a one-year-old pilot program at the library aims to expand WiFi access for patrons beyond business hours by allowing patrons to borrow portable devices that allow them to connect to the web.

These “hot spots” have been available since October 2018. Through the program, any adult card-holding patron may borrow a hot spot for three weeks. Kurt Mansperger, chief technology officer at BPL, said that these hot spots allow people to continue to benefit from library services after they close for the day.

“The library provides a lot of great services to people, but it’s limited to when we’re open,” Mansperger said. “It’s great that we can help people to educate themselves by loaning books, but how do we help people with getting access to internet outside of our open hours?”

Jessica Elias, curriculum development coordinator for technology workshops at BPL, said that the hot spots allow the library to help solve this issue, as well as address other barriers to access that may often be very unintentional.

“[For parents and caretakers] it can be very difficult to have children around while you’re trying to work on a library computer, so a hot spot enables somebody to do all of this work and more through the comfort of their own home,” Elias said.

Modern jobs and classes  often require internet connections and technological hardware, but disparities in access leave some underserved populations behind. Digital equity, as defined by the National Digital Inclusion Alliance, occurs when all individuals and communities are able to access the technology necessary to fully partake in society, democracy and economy. It is also necessary for civic and cultural participation, as well as employment and access to essential services.

In the 21st century, the need for digital access is only growing. For many Fortune 500 companies such as Walmart, Target and CVS, who hire hourly-wage workers, applications are submitted only online. And when attempting to pursue further education or assisting a child in theirs, inability to access the internet creates a barrier that affects an individual’s academic success. This landscape means  communities with less access to internet or hardware can be left behind. According to the 2018 American Community Survey, households with lower education attainment or households of color were less likely to have access to broadband internet.

According to the survey, in Boston, 95.1% of household populations with a bachelor’s degree had a broadband subscription in 2018, but when looking at households with only a high school degree equivalent or some college education, that number dropped by about 11%. In household populations with less than a high school education less than three-quarters had a broadband subscription.

Boston Public Library runs a collection of programs and initiatives designed to address these divides and provide technological support to patrons. These programs are designed to provide patrons with access to hardware and internet connections as well as teach them skills that will keep them up to date in the modern technological landscape.

As of November, In a written statement sent by the library on Nov. 11, the 200 hot spots available in the pilot program have been checked out approximately 2,000 times and . According to the same statement, 41% of patrons who completed a survey after borrowing a hot spot identified as having a household income of less than $20,000.

The Fund for the Boston Public Library, an independent nonprofit dedicated to providing financial support for BPL, places investments into technology and innovation as one of the four core elements of its mission. Executive Director Mary Myers said the hot spot program and other library initiatives regarding digital equity are important in making sure all citizens of Boston have equal opportunities.

“Underserved communities don’t have access to the same resources that other communities have,” Myers said. “At the library, our principle has been to provide access and opportunity to all of us, to help us be our own self and level the playing field. In today’s world, digital literacy and expertise and understanding is paramount for somebody to be able to be a thriving person in our community and a well understood citizen.”

Mansperger says he has some changes in mind for how the hot spot lending program will run, now that it has been going for a year. Chief among these, he wants to shorten the lending period to get hot spots to more patrons and make use of them more intentional to prompt patrons to borrow them so it “just allows them to do what they need to do.”

“I am specifically getting that hot spot to go and learn something new, work on resume, et cetera, work on a homework project,” Mansperger said. “I’m not going to delay.”

The hot spot program is only part of the solution, said Theodora Hanna, co-executive director of the nonprofit Tech Goes Home. Giving people access to the internet solves some problems, but it does not teach patrons how to use the technology that can close the digital divide.

“We talk about it as a three legged stool — you need the skills, access, and hardware” Hanna said. “Lending programs help with the access, but folks still need digital skills and computers.”

Other Boston public library efforts are working to address these other sides of digital inequity. In addition to the hot spot lending program, the library also runs a series of computer and technology workshops for patrons of all ages and backgrounds to provide the skills required in the 21st century digital environment.

Elias, who works with the workshops program, said that for younger patrons workshops tend to focus on creative applications like GarageBand, a music creation software, and Adobe Illustrator, a program used for creating graphics. Adult programs cover a range of topics from the basics of using a keyboard and mouse to using Microsoft and Google applications and digital privacy issues.

BPL also partners with local nonprofit Tech Goes Home to further develop their workshop offerings and to increase access to the devices on which people access internet in underserved communities. The organization, which started in 2000, received a federal grant to expand city-wide in 2010 and has continued the program’s mission.

Hanna said Tech Goes Home has managed to reach over 35,000 people over the last nine years by following a train-the-trainer model, in which they train staff members at partner sites to run 15-hours of free internet skills training. In these courses, participants can acquire a variety of internet skills, including creating an email account, learning how to apply for jobs and accessing city resources.

The organization works throughout Boston but has the largest footprint in Roxbury, Dorchester, Mattapan and East Boston. The 167 sites the organization partnered with in the last year, according to their 2019 Impact Report, included 11 BPL branches around the city, which they hope to expand.

“We’re just a staff of six, so how we reach — this year — 5,500 people a year is that we work in the neighborhoods that we want to serve through trusted, local partner sites,” Hanna said.

The organization will often go to a school and train teachers to run Tech Goes Home for students’ families, or go to libraries and teach a librarian to run the program for branch patrons. This way, Tech Goes Home remains behind the curtain, while encouraging relationships between patrons and these resources.

In addition to their services, after patrons complete a 15-hour long training program, learners have the option of purchasing a subsidized device. Through the BPL Tech Goes Home programs graduates may buy a $50 Google Chromebook.

Similar programs to the Boston Public Library’s hot spot lending has been in place across the country for several years, including in New York City, San Mateo, California and and Saint Paul, Minnesota.

Ultimately, each of these Boston solutions comes together to create a landscape where, eventually all citizens may have equal digital opportunities.

“Digital equity is really about leveling the playing field and making sure that everyone can use the internet to meet their fundamental needs,” Hanna said.