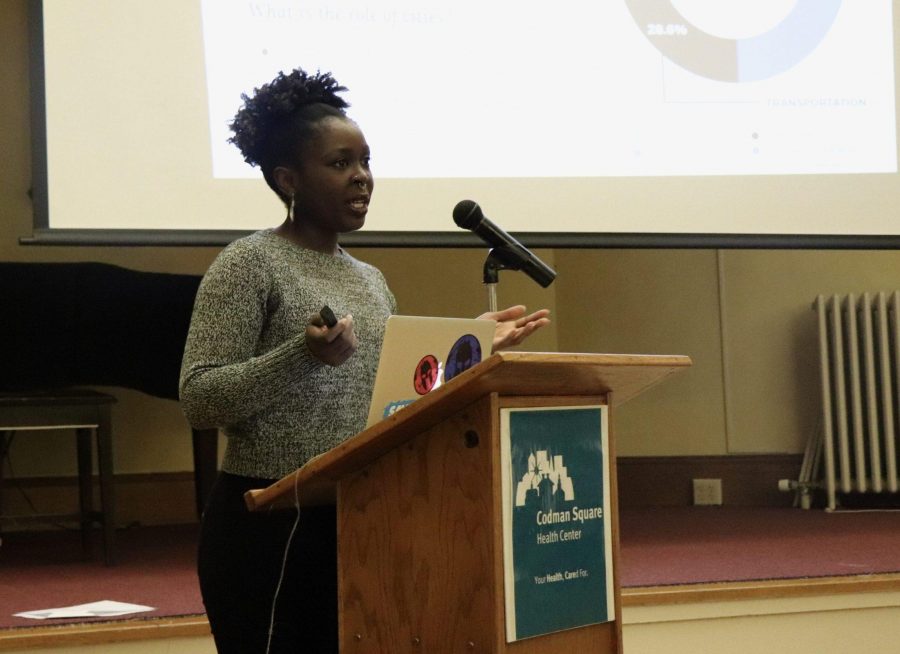 As the City of Boston moves ahead with its environmental goal of carbon-neutrality, another city department has launched a program to make sure climate change preparation and activism is accessible to Boston’s residents of color.

Greenovate Boston, a new team out of Mayor Martin Walsh’s office and the city’s environment department, held a roundtable discussion last Wednesday evening, to talk about racial equity and climate change. About 20 people gathered in the Great Room at the Codman Square Health Center in Dorchester, for a presentation from Greenovate community leaders on how climate change affects people of color.

Sharon Amuguni, one of the discussion facilitators, explained that the effects of climate change have a harder impact on populations who are already vulnerable. For example, when it comes to extreme heat waves and air pollution, she said, it’s the neighborhoods with very little green space that fare the worst. The same goes for extreme precipitation and flooding. In Boston, those neighborhoods are predominantly black, Hispanic or Asian.

“The areas that will see a heavily increased amount of flooding seem to be areas such as Roslindale, Mattapan, Dorchester, Jamaica Plain, just to name a few,” Amuguni said, pointing to a flood map of Boston. “Imagine our work commutes, our transit commutes with that much rain.”

David Corbie, Greenovate Boston’s outreach manager, said that in the event of a climate emergency or natural disaster, it’s low-income people of color who are less likely to be prepared.

“How can somebody who is in poverty or makes a certain income, how can they really prepare for climate change?” Corbie said. “If I’m somebody that is making $15 an hour or $10 an hour, what is my likelihood of being able to … prepare my family for a coastal storm? If there is extreme heat or if there is extreme cold, or if there is a huge snowstorm, what does that do to somebody, how can they rebound from that?”

The Greenovate team said that green solutions, like clean energy and energy-efficient homes, should be made accessible to low-income communities of color as well.

“To address racial equity, this means addressing basic questions like renewable energy expense and the cost,” Amuguni said. “How do we make sure that everyone can afford it? What if updates to my house increase the likelihood of gentrification in my neighborhood?”

After the presentation, attendees broke into small groups to discuss what communities can do to prepare and what solutions should be put in place to ensure environmentalism is equitable.

Audience members suggested policy that would require big polluters to pay a tax and landlords to weatherproof their homes, programs that would make solar energy more affordable and neighborhood sessions to train residents on energy efficiency and climate awareness. Other ideas included planting more trees and making public transportation free to all.

Corbie said he loves the small group discussion format because it allows all attendees to get a chance to meet and hear each other’s ideas.

“It’s not so incumbent upon city staff being there to have the discussion,” Corbie said. “It’s more on community members taking interest and being passionate and then wanting to bring it to their communities because they see the value, and the impact that climate change is going to have.”

Dorchester resident Judy Rose, who attended the event, said she felt it was her obligation to learn more about how she can help to lessen the effects of climate change in her own community, which she described as vulnerable.

“I’m glad it’s happening … and that the conversation is brought to the inner city of Boston for people of color to learn and be a part of the change that we want to see,” Rose said. “If we’re not informed, we are vulnerable, and we need to be less vulnerable and take action for ourselves as well.”

A version of this story was published in The Bay State Banner.