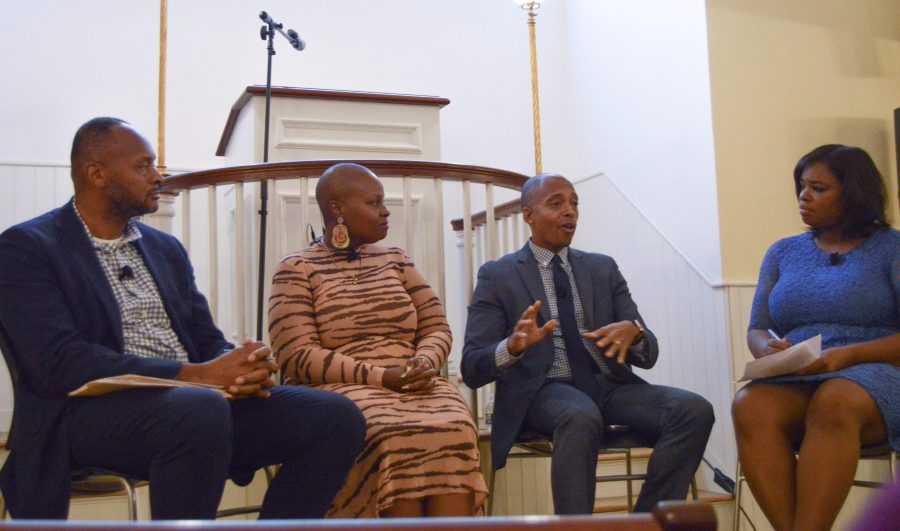 Ex-prisoners, teachers, students and retirees, gathered Nov. 7 in the African Meeting House in Beacon Hill for a panel discussion on race and criminal justice reform in America.

Muhammad said that 70 percent of people currently incarcerated are people of color. This, he said, is a recent phenomena; during the 1970s the majority of incarcerated persons identified as white European, Muhammad added.

“I’m skeptical that we did as much work as we think we did over the past 20 years in deconstructing racist ideas,” Muhammad said in a discussion about statistics which show that the majority of incarcerated people are African American or Latinx.

Curry, currently on the National NAACP’s board of directors, spoke about his experience, growing up visiting his uncles in Norfolk State Prison.

“You look around and the people being harrassed, arrested, incarcerated were people who look like me,” said Curry. “And then when you go visit prison, the number is 60 to 70 percent black and brown faces — that tells you something. You internalize it, ‘Why are we so criminal?’”

Curry said the data (no specific data source was cited) has shown that the crime rate for black and brown people compared to white people is the same, but people of color are arrested and incarcerated more often than white people.

“Power has a privilege, and that decides who you arrest, what communities you police, what kind of probation, parole, how long your sentences are, who the judges are,” Curry said.

Curry said Boston Public Schools started a social justice class about four years ago to make sure every student that goes to school in Boston has a conversation that is foundational about race and gender. Supporting the work of BPS and companies which make it mandatory for employees to have conversations regarding race, Curry commends them for raising awareness of these issues.

Discriminatory incarceration practices put a heavy strain on families, Harris said. She shared her personal experience of being a single mother while her husband was in prison, raising their kids without their father and taking weekly trips to visit him in prison. “It was very emotionally and financially straining,” Harris said.

Family and community support as well as financial aid are the major things families of incarcerated people appreciate, Harris said. The shame of telling people a spouse is in prison and feeling “guilty by association” is one of the main reasons, Harris said, families choose to “live in silence,” and are unsupported.

Yvonne Watson, a retired high school teacher at the event, said that “over 150 years later and we still have to be cautious of law enforcement. ‘No snitching’ is [an] historical [mindset]. It’s no accident that an entire community is doubtful about police being available to ‘protect and serve.’”

“It takes a generation to get there,” Curry said, in response to a question about how long it will take for mass incarceration to not be a problem anymore.

“It is people who think outside the box and really want to reform how we do our education systems, our housing. They need to get elected, they need to become the business leaders, people of influence,” Curry said. “We’re not there yet, but I’m inspired by the next generation that’s in leadership that will be able to be disruptive like that. It’s coming.”