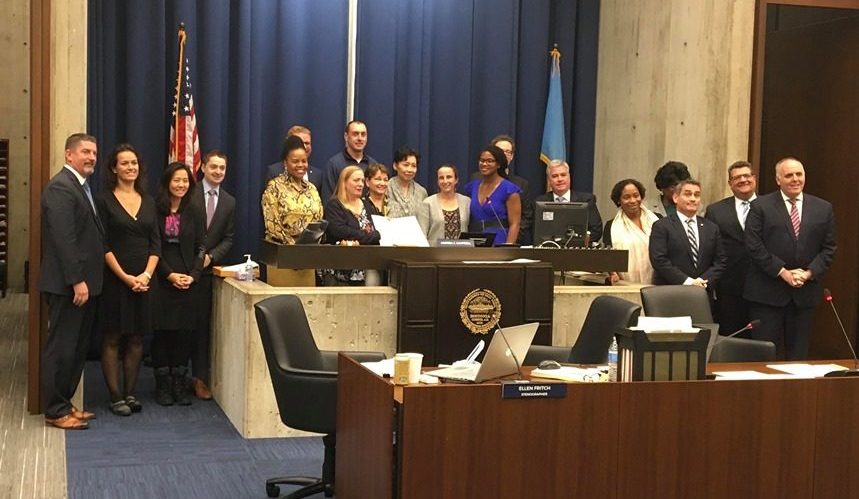 Councilors stand with Jason Gallagher, principle of Harvard-Kent Elementary School, who recently secured a grant for the school. Photo by Joseph Handel.

To establish equitable regulation of the cannabis industry in the City of Boston.
Councilor Michael Flaherty listed the 20 amendments that have been made to the bill since its inception. One of which is the inclusion of the statement  that “the City should maintain and issue an equal number of equity licenses to the number of applicants that do not qualify for equity licenses,” and that “there shall be a percentage scale based in diversity and inclusion, weighted at 25 percent.”
Councilor Kim Janey said, “I am proud that the Mayor and the Council are taking this very important step forward together to ensure equity in our local licensing process.”
She emphasized the importance of this measure. “While dozens of stores have opened, not one of them opened in the last 12 months has an economic empowerment status, not one of them opened in the last 12 months has been majority owned by people of color,” said Janey. “That will change.”
Transparency was important for Councilor Josh Zakim. “We are having, because of this, a transparent and predictable process,” said Zakim. “Nothing is perfect, nor will it be, but this is a such a huge step forward for licensing and permitting for the cannabis industry in Boston … I look forward to seeing how it will change the fabric of the city, not just in the cannabis industry but across our society and industries.”
Councilor Michelle Wu expressed disappointment in how long it took the council to pass this bill, but said she was happy with the outcome.
Councilor Frank Baker had a few questions for how this would impact people who have already looked into business opportunities and there was a small recess called to discuss this.
Councilor Althea Garrison opposed the measure. “The cannabis commission board would be better served if the board was overseen by the cannabis commission control,” said Garrison. She was the only councilor to vote no to the bill.
Rachael Rollins and Tito Jackson were in attendance for this discussion and left shortly after.

An ordinance to establish an independent commission on equal opportunity and the elimination of systemic bias in the workplace.
“The community expressed support and recommends the Human Rights Commission provides a fair avenue for individuals to file discrimination complaints and a way for examining and developing policies to reduce workplace discrimination and equal opportunity in the workplace,” said Councilor Flaherty.
The ordinance was placed on file.

An order for a hearing to discuss pedestrian crossing signals, traffic calming and Vision Zero.
Councilor Wu said that they should be “thinking through ways that we can bring more of our design and engineering in-house rather than having to put that out to contract and bid every single time. … We need to do more and we need to do it faster.”

An order for a hearing to discuss transportation network companies operating in Boston.
Councilor Matt O’Malley noted “10 percent of traffic in Boston is from rideshares,” and he wants “commonsense rules and regulations that will not hinder this industry or make it overly onerous or expensive.”

A resolution in support of divesting independent retirement funds from fossil fuel companies, proposed by Councilors Wu and Lydia Edwards.
The state controls pensions, but there is currently a bill in the state house to give municipalities more freedom to invest or divest these funds as they please.
“I want to go on the record supporting the bill letting the cities make that decision,” said Wu.
Councilor Edwards agreed and said she was in favor of “giving freedom for municipalities to move their money.”
Delete Image
Align Left
Align Center
Align Right
Align Left
Align Center
Delete Heading