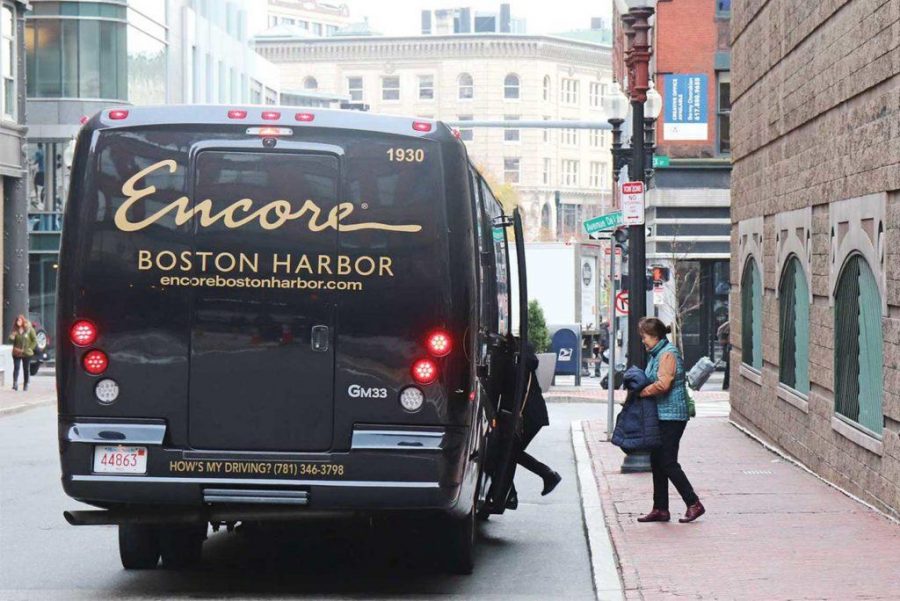 Shuttle buses such as this one from Encore Casino regularly pick up customers from Chinatown and other low-income communities. Photo by Eileen O’Grady.

On a recent Monday in Boston’s Chinatown, a group of about 14 people stood outside The Chicken and Rice Guys restaurant on Bedford Street, waiting for an orange coach that would transport them to Mohegan Sun casino in Uncasville, Connecticut.

Just 15 minutes before, a similar coach had departed from the same spot for Twin River Casino in Lincoln, Rhode Island. And 25 minutes after the Mohegan Sun bus pulled away from the curb, a black shuttle van departed the same spot bound for Encore Boston Harbor Resort in Everett.

For many who work long, grueling hours in Chinatown’s food service industry, gambling at nearby casinos presents one of few outlets for entertainment and social connection. But according to a report released in October, many Chinatown residents are struggling with gambling addictions that negatively affect their finances, mental health and personal relationships.

According to the report, which was conducted by professor Carolyn Wong from UMass Boston and Giles Li from the Boston Chinatown Neighborhood Center, Chinatown is particularly vulnerable to problem gambling because of a high concentration of poverty, low-paying jobs and lack of English proficiency. The neighborhood itself boasts little space and few programs for residents to engage in recreational activities.

“People who are low-income, immigrants, who are under stress from difficult jobs, these people are at risk for a gambling problem,” Wong told the Massachusetts Gaming Commission in an Oct. 24 meeting. “The Chinese service workers in Chinatown work very long hours, some of them six days a week. The only day that they get off, some of them may go to the casino.”

In the report, researchers from UMass Boston interviewed 23 Chinatown residents, low-wage workers or retirees in food and services industries. Researchers asked participants to share their own history of gambling, their motivations and the effects of gambling on themselves and family members. The interviewees, who had different degrees of gambling dependency, mostly said they relied on it to escape the drudgery of work and social isolation caused by language barriers and long work hours.

One interviewee, identified in the report as a middle-aged woman who emigrated from southern China 20 years ago and works in a restaurant, said her friends first took her to a casino shortly after she arrived in the U.S.

“Our jobs are hard and we make little after working for more than 10 hours daily,” she said in an interview that is transcribed in the report. “We have to take a lot of flak. You go to the casino, you get to gamble and get a free meal. It’s enjoyment.”

Many casinos also target their advertising to Chinese demographics, with Chinese versions of their web pages, concerts featuring famous Asian musicians and table games like Pai Gow Poker that are derived from traditional Chinese games.

“It controls you,” said another interviewee in the report, an elderly man who came to the U.S. 10 years ago and now works in a restaurant. “There is something particular about the ambiance of the casino that once you go inside, it makes you go crazy. It makes you a different person that you lose control of yourself when you are inside, even though once you come out you are back to normal.”

While the report emphasized the importance of Chinese social card or tile games to immigrant communities, it said casino games heighten risk of gambling addiction in a way traditional card games don’t, due to fast repeat play, free drinks and the promise of large winnings.

The fact that many nearby casinos are easily accessible by shuttle bus, does not help the problem. Mohegan Sun, Foxwoods, Twin River and Encore all run buses to Chinatown that stop multiple times a day on Bedford Street and on Harrison Avenue to pick up passengers. Encore’s location makes it particularly accessible from Chinatown, as well as from other Chinese enclaves in Malden and Charlestown.

“The opening of Encore Casino … when we began this project, aroused concerns that there would be heightened risk because it is so close to Chinatown,” Wong said. “They can get to the casino very easily on public transportation or through the shuttle, and then there’s public transportation from Quincy.”

Currently, there is not much available in terms of culturally specific prevention and treatment programs for gambling addiction in Chinatown, and researchers recommended establishing targeted treatment programs and activating community engagement initiatives on the ground to help the problem.

The Boston Chinatown Neighborhood Center plans to continue working in the community and hopes to open up the conversation more among the community, then to bring in health communication experts and education initiatives.

“There’s actually not that much research about the Asian American community and gambling addiction, even though it is a community that is widely known to be at risk,” Li told the Gaming Commission. “We appreciate the opportunity to be among the few research studies that is going out to the public to inform public conversation around these issues in our community.”

This story was published in The Bay State Banner.