Changemaker: Kip Clark has an open ear to strangers 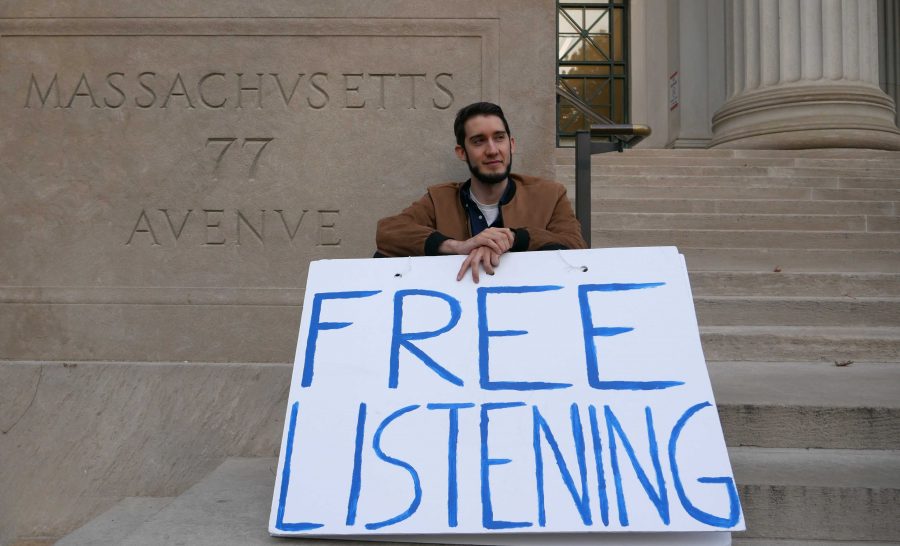 When time and weather permit, Kip Clark sits on the steps of MIT inviting passersby to speak with him. Photo by Jordan Erb.

Whenever Kip Clark has spare time and the weather permits it, he sits on the stairs of 77 Massachusetts Ave. in Boston near the main entrance to MIT. A big sign leans against his knees, inviting strangers to approach him. “Free Listening,” it says in bold, blue letters.

The sign has been accompanying him since July 2018. Clark, a 26-year-old data analyst, listens and occasionally gives advice to anyone who pauses to talk about two to three times a week. Students, tourists and the elderly have approached him to share stories or to skeptically ask about the reasons for his offer.

Clark wishes to be an outlet for people and the stories they want to tell, whether it is something a person feels happy or ashamed about, or something they can’t talk about it with anyone else. He wants to remind people that it is OK to talk about themselves and believes that listening is a very valuable tool to connect with others.

The following transcript has been edited for length and clarity.


Q: How did you come up with the idea for free listening?

A: The idea came from an observation that there’s something missing. I think listening may be a part of that. I don’t know if I’d go so far as to say it is the antidote to our cultural problems, but I think it is part of it. If you listen, you can understand, if you understand, maybe you can empathize. And it could be the root of a lot of better things. It’s worth planting that seed to see if it takes.

Q: What motivates you to listen to strangers?

A: There have been enough experiences in my life where I haven’t felt listened to, or I have very clearly been trying to say something and people heard something else. That has frustrated me. Part of it is born out of a desire to respond to that negative feeling in a positive way. Something that also motivates me is that there have been experiences in my life, often between friends, where a person has told me a thing that’s meaningful to them. And then they’ve thanked me for listening. I felt energized by that, like you trusted me in that moment. And you don’t need to thank me as though it’s a service that I gave, because I got something out of this.

Q: What is your goal?

A: I see this as a form of love or kindness at its highest level if I’m doing it well. I would like other people to feel listened to, and loved, if their emotional language resonated with that but I don’t have a number of people I’m looking for nor am I looking for specific people. I’ve been really touched that a pretty wide swath of diverse individuals has approached me. I guess one goal is to continue doing this to inspire others in whatever way that goes.

Q: Do you come across any challenges?

A: If I do, they’re all internal. I’ve never felt threatened or unsafe. At times I lose my train of thought when listening to a person. I want to give them all equal experiences. I get self-conscious about potentially being a lesser listener to the latter folks. But I’m hopeful that those are all muscles that are strengthened with time.

Q: How are you overcoming those challenges?

A: I wouldn’t be surprised if listening became easier if I became more content, happier and satisfied as a person. And I think that that may be the root of a lot of people’s difficulty to listen, if we’re in an individualized culture where we’re stressed about our next meal or next paycheck, it would be pretty hard to listen to other people talk about the same thing because you have a self-preservation instinct. If I better attend to my hierarchy of needs, I think I’ll be better equipped to be with people and be present with them.


Q: What do you wish people knew about your listening?

A: That it is non-judgmental. It’s just about creating a space where a person can say words.

Q: Do you see change happening?

A: There have been some people that have come back and have said, “I remember leaving that day and feeling better,” or “Kip, it’s great to see you again. I really enjoyed the first time we talked.” I don’t know if I’m perceiving change, but they’re describing change and I take them at their word.

A: Maybe less judgment from some of the people who walk by and are clearly confused, concerned, or maybe even feel judged. There have been some very interesting facial expressions. I think that’s a valuable reminder that I’m always going to live in a world where some people won’t resonate with it, and that I have to make a choice of letting that stop me or continuing.