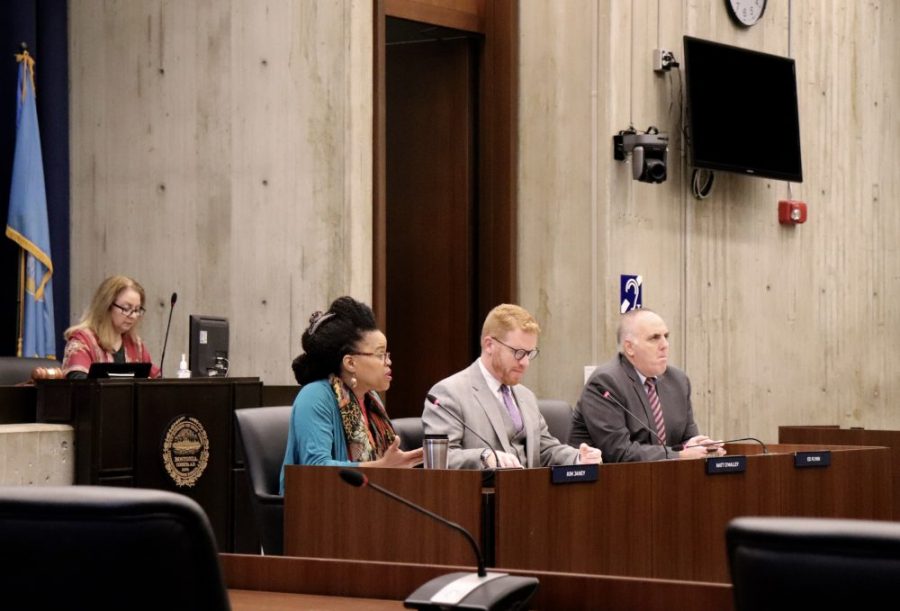 A Boston City Council committee held two hearings at City Hall on Friday to discuss public health disparities among communities of color in Boston. The Committee on Healthy Women, Families and Communities has launched an initiative to combat high rates of poor health among African American, Asian American and Latino residents who suffer from conditions like asthma and diabetes at a much higher rate than their white counterparts.

Councilors Kim Janey, Ed Flynn and Matt O’Malley presided over the hearings, which began with a discussion on general public health disparities in the morning and transitioned to focus specifically on black maternal health in the afternoon. They called on public health experts from the community to testify.

“Whether we’re looking at asthma, diabetes, heart disease or cancers, these illnesses impact communities of color in a way that means we need to come up with some solutions,” Janey said. “Here in Boston where we have the best hospitals, it’s important that we close these gaps between these different racial groups.”

According to the most recent Health of Boston report released by the Boston Public Health Commission, black and Latino residents have higher rates of obesity, hypertension, tuberculosis, HIV, diabetes-related hospitalizations and assault-related emergency department discharges than their white counterparts. Asian residents are less likely to complete screenings like pap smears, mammograms and colonoscopies. All non-white groups are exposed to more air pollution than white residents.

Monica Valdes Lupi, executive director of the Boston Public Health Commission, told the committee that there are many factors that influence these health disparities, including systemic racism that has led to unequal access to health-boosting resources.

“Poverty and a lack of educational and employment opportunities often have their origins in discriminatory laws, policies and practices,” Valdes Lupi said, “that have denied people of color an equal right to earn income and accumulate wealth, own property, get access to nutritious and affordable foods and quality healthcare.”

She spoke to the committee at length about health concerns in Chinatown, which include cancer, poverty, poor air quality and gambling addiction.

“Residents struggle with some basic needs, things we just take for granted,” Rubin said. “I’ve had residents tell me over and over and over again about public defecation right on their doorsteps.”

City councilors discussed two barriers to public health equity: residents not seeking medical care for themselves, and health care providers not listening to their patients.

“We know our healthcare system is built on a model of structural racism,” said Dr. Joseph Betancourt, the chief equity and inclusion officer at Massachusetts General Hospital. “Our minds take shortcuts, we make assumptions, we stereotype people even though we don’t want to do it. These stereotypes are activated the most when we’re stressed or under time constraints or multitasking — three characteristics that define health care today.”

One of the main recommendations that Betancourt, Rubin and Valdes Lupi made to the committee was to implement more racial bias training for healthcare professionals.

They also suggested improving translation services at hospitals and allocating more funding to the community organizations that are already working to solve health problems in their neighborhoods.

The committee discussed the way city agencies and officials collect data on communities of color, suggesting that disaggregating the data by ethnic group rather than general categories of race may help officials to see specific problems affecting pockets of people around the city. A bill that is currently pending in the Massachusetts House of Representatives would make this data disaggregation a requirement statewide.

In Massachusetts, the State Health Assessment has documented persistent disparities in prenatal care for black women, and the percentage of black mothers who suffer from postpartum depression is three times higher than that of white mothers.

According to Valdes Lupi, the mortality rate for black infants in the neighborhoods of Roxbury, Dorchester, Hyde Park and Mattapan is 10.3 deaths per 1,000 births, more than three times the state average of 3.7 per 1,000.

Rep. Liz Miranda (D-Boston) told the committee that one of the biggest barriers to finding a solution is that research on maternal health has mainly focused on individual women’s actions rather than addressing larger systemic problems like racism or poverty.

“All of these systemic issues hold significant burdens of trauma on black women throughout their birthing journey,” Miranda said. “Our ZIP codes are literally killing us, causing us to have more unnecessary C-sections, later term births, underweight children and high rates of infant mortality.”

Miranda recommended increasing access to doulas, birthing coaches who she said could act as community health advocates, bridging the gap between black women and health care professionals. Miranda proposed a bill in early January that would ensure that doula services are covered by Medicaid.

Dr. Robin Reed, who is an assistant professor at Tufts University, recommended increasing community involvement in the issue, establishing a community advisory panel that can analyze problems with health care for black women in their neighborhoods and offer suggestions for improvement.

“The social stressors of marginalization have an impact on black women,” said Reed. “It’s time to understand that young black women need to be supported, assessed fully for risk, provided with appropriate medical monitoring and care.”

O’Malley said the committee expects to file legislation in January 2020 proposing solutions for the public health disparities discussed and recommendations gathered in the Oct. 25 hearing. The councilors said they hope that the new bill will skip the hearing phase and proceed directly to a working session.

“I’m really hopeful that we will really look at the intersections of gender and race and class,” Janey said, “to really peel back the onion and offer new strategies for moving forward so that we can begin to close these gaps.”