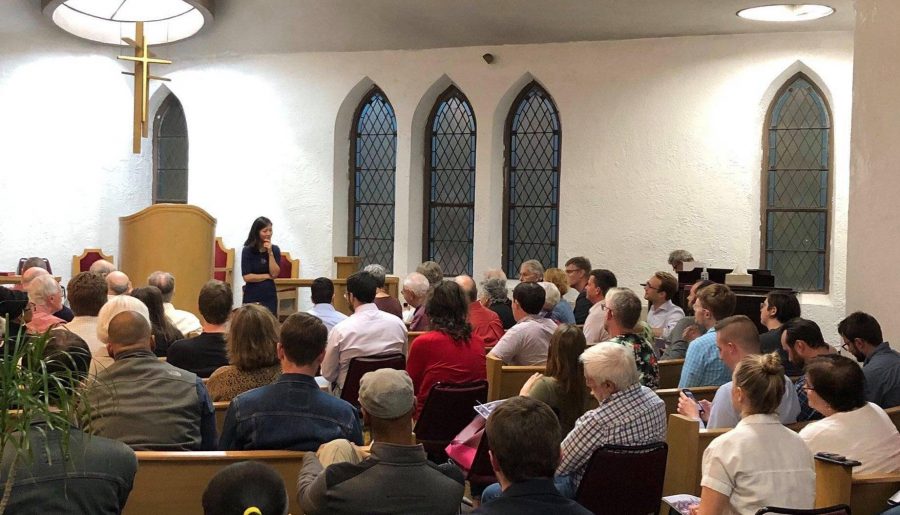 The first of many listening sessions for Wu’s plan to abolish the BPDA took place on Oct. 7 in East Boston. Photo courtesy of Wu’s Facebook page.

City Councilor Michelle Wu proposed a sweeping plan on Oct. 7 to abolish the Boston Planning and Development Agency, an organization that handles the city’s development, planning and zoning.

Wu’s plan came in the form of a 54-page report titled “Fixing Boston’s Broken Development Process: Why and How to Abolish the BPDA.” Her goals include building a new planning department, reexamining the city’s zoning codes and creating a new comprehensive master plan regarding the city’s long-term development. The report also recommends the city set clear planning rules that match the community’s needs, provide transparency and accountability, boost civic engagement and build a more inclusive city.

In an Oct. 9 City Council meeting, Wu said the city’s development is too individualized, done on a parcel-by-parcel basis, and grants too many special approvals and waivers for certain developers.

Most recently, John Lynch, a former BPDA official, pleaded guilty in federal court for accepting a $50,000 bribe. Lynch took the money from a real estate developer –– who needed a zoning waiver to collect a $500,000 profit –– in exchange for influencing the vote of a Zoning Board of Appeals member.

Wu said that Boston’s development process should move away from waivers and special approvals, and focus in on big-picture, city-wide master planning that would help resolve problems, including traffic congestion and the effects of climate change.

At the meeting, Councilors Frank Baker and Mark Ciommo spoke after Wu’s presentation. Baker wouldn’t comment in favor or against the report, but lauded the Boston Planning and Development Authority, claiming that its work is better than that of its predecessor, the Boston Redevelopment Authority.

Ciommo said while there’s room for improvement in any organization, more people should have been consulted and their voices included in the report. Ciommo also made clear that he hadn’t yet read the full report.

“It pains me, because so many people put so much time and effort into these processes, and not to include us –– those of us who have done this for quite a while –– I think it’s missing a big piece,” Ciommo said in the meeting.

Brian Golden, the director of the Boston Planning and Development Agency, and Mayor Marty Walsh put out a joint statement to the press regarding Wu’s plan to abolish the organization.

“While there is still more work to do, I am proud of the progress that has been made to not only improve the development and planning process within the agency, but modernize outdated operational functions internally and externally,” Golden said. “Proposing to abolish the BPDA ignores the reality of the present day community-based planning agency, and discredits the hard working staff who are in our neighborhoods every single day engaging residents on how we prepare for Boston’s future.”

The report follows Wu’s two-year stint as chair of the City Council Committee on Planning, Development and Transportation, during which she said she was inspired to change the city’s development process.

“It came from the recognition that all of the big issues we’re working on across the city are related to, and stem from, how we are thinking about development and planning,” Wu told the Scope.

Dissolving the development agency would be a long-term process, Wu said. In the meantime, she is hosting neighborhood meetings throughout Boston to discuss the idea, and eventually will hold City Council hearings on the subject.

If the city decided to abolish the Boston Planning and Development Agency and set a new structure in its place, much of the work could be done without legislative action. However, state legislation would be required to dissolve the agency’s board.

The first step moving forward according to Wu, would be to restore city control, which would involve transferring the agency’s personnel and assets to the city.

Wu said there are questions surrounding what the agency’s replacement should be, and that the replacement would have to be decided through an open process that would involve residents across the city.

She also said some stakeholders within the BPDA –– and those who the current development process benefits –– may be resistant to change.