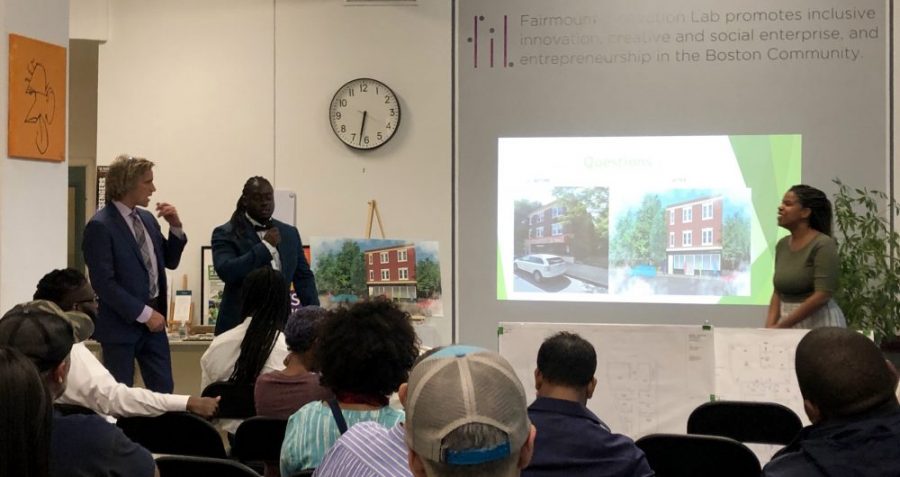 From left: Michael Maloney, Mark Bouquet and Vanessa Jean-Baptiste present their plan for Legal Greens LLC to an audience of Upham's Corner residents on Wednesday night. Photo by Eileen O'Grady.

A marijuana dispensary could be coming to Dorchester next summer, and it has a mission to provide residents with more than just weed.

In a public meeting held at the Fairmount Innovation Lab in Uphams Corner Wednesday night, entrepreneur Vanessa Jean-Baptiste spoke to a crowd of about 40 neighborhood residents about her proposal for Legal Greens LLC, a dispensary she hopes to build at 693 Dudley St.

Besides hiring residents to work in the store, Jean-Baptiste and her business partners Mark Bouquet and Michael Maloney want to offer record expungements for residents with previous marijuana convictions and to offer job training and youth empowerment programs. The founders say they want their business to empower Uphams Corner, a place that has experienced disproportionate harm from marijuana law enforcement.

“It gives an opportunity for me to help my community as well as help myself in a sense, to not continue the cycle of living in poverty and doing the same things everyone else is doing,” said Jean-Baptiste in an interview after the meeting.

Jean-Baptiste is a 28-year-old Brockton resident who has worked as a legal intern. Bouquet, the operations officer, got his managing experience at Walgreens. Maloney is a criminal defense attorney who has built a chain of medical marijuana evaluation facilities, and now owns a CBD company.

The three plan to locate their dispensary in the Familia Grocery building on Dudley Street, tucked between Nonquit Street Park and the Fairmount and Franklin commuter rail line. Legal Greens is the tenth marijuana dispensary to be proposed for Dorchester, but so far only one — Pure Oasis in Grove Hall — has received a provisional license to operate.

During the Q&A session following the presentation, some residents voiced concern that a marijuana dispensary would only worsen problems of drug abuse and addiction that already plague the neighborhood. Several residents said Dudley Street’s proximity to “Methadone Mile,” a stretch of Massachusetts Avenue frequented by people who sell and use drugs, is a problem.

“Every single day we have kids coming up here and they’re stoned up, they’re drugged up, I call the police myself four to five times a month,” Upham’s Corner resident Alice Gomes told the presenters. “I’m worried we don’t have the support in place to support this right now.”

“Within a month of moving to this neighborhood I had a murder in my backyard. It was over drugs,” Morgan said. “I really don’t think you should oppose something that is controlling how people get marijuana into their hands.”

Bouquet said the company plans to place lights and video cameras on all corners of the building, to enhance safety. Security personnel will be present, though their job will mostly be to enforce parking rules.

Nancy Conrad, who has been living in the neighborhood for 35 years, spoke in support of the business, saying that it could help to stimulate economic growth.

“So many things have changed, but the business sector has pretty much stayed the same,” Conrad said during the Q&A. “I want so badly to have a company come to Upham’s Corner that’s going to be above board and legal and will attract people to [the neighborhood].”

Many of the audience members applauded at the end of the presentation in a show of support that is rarely given to a marijuana business in the neighborhood. One year ago, at a similar meeting in Upham’s Corner, opponents of one pot shop shouted down its supporters during the Q&A.

If Legal Greens is granted a host agreement by the city this fall, the next step will be to apply for a provisional license with the Massachusetts Cannabis Control Commission. If all goes according to plan, the founders hope to commence operations in June or July, 2020.

Jean-Baptiste is pleased with the positive feedback she has received, and is optimistic about the future of her business.

“It’s life changing in a sense,” she said. “For something that once broke families apart, I am able to help rebuild families with the funds that we are making. It’s revolutionary.”