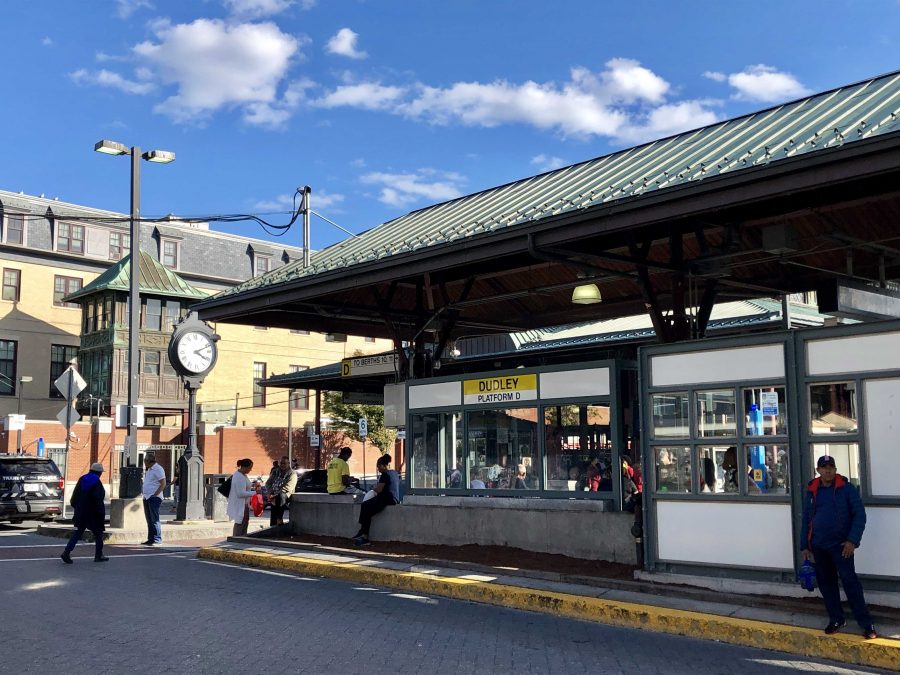 A window into one resident’s daily commute

Bill Tony, an older man who declined to give his age, was waiting for his bus home at Dudley Station on a cold, windy Sunday in March. He works near Hynes Convention Center and lives between Dudley and Field’s Corner, which means he takes multiple buses just to get to work in the mornings, usually Thursday through Monday. He said while the buses run frequently on weekdays, the weekends pose a problem for him.

He takes the bus, he said, because he can’t afford the parking near his work. But that means he’s stuck with the train — and in his words, “the T is unreliable.”

When it’s not rush hour, he said he’s waited 45 minutes to an hour for a 15 or 41 bus, two key routes he needs to get to work or back home. An MBTA bus schedule for the 15 says buses are scheduled to run every 15-20 minutes on the weekdays. However, according to the MBTA’s own statistics, bus reliability has averaged around 72 percent over the past 30 days, and only peaked at 76 percent on March 2.

On the weekends, there’s half the number of scheduled buses sometimes an hour apart on the schedule, not to mention frequent traffic delays on top of that.

Tony’s experience with Boston’s transit system is commonplace in and around Dudley Station. Overall, according to an annual traffic congestion scorecard from Inrix, a transportation analytics firm, Boston ranks seventh in a list of most congested U.S. urban areas. But that congestion and transit shortage disproportionately affects marginalized communities, such as people of color and low-income folks. That inequality is manifested clearly in Roxbury, where Tony was in the middle of his sometimes two-hour commute.

Upham’s Corner roughly marks the halfway point between Dudley and Field’s Corner, near Tony’s home. He might start his commute at the Columbia Road, Dudley Street bus stop.

Then, he would take the 41 bus for 11 stops. He would get off at the Dudley Street, Warren Street bus stop.

Next, Tony would walk about 0.1 miles to Dudley Station.

From Dudley, he would take the 1 bus for 13 stops to Hynes Convention Center. Finally, Tony would walk the rest of the way to work.

Expert weighs in on transit struggles

Barry Bluestone, founding director of the Kitty and Michael Dukakis Center for Urban and Regional Policy at Northeastern University, was able to shed some light on why Boston’s transit is unreliable.

He said it has a lot to do with rising rents. Working families that don’t own property can’t afford to live in the city anymore, so they move out to places like Lowell, Lynn, Brockton or Everett.

“As people have to move farther and farther away to find decent housing that they can afford … it has clogged our highways and made the demands on the MBTA and commuter rail so much greater,” Bluestone said.

The more people living outside the city, the more people there are needing to use the limited amount of transit present in those areas.

Not all riders agree

Sandy Reis was heading back to the Woods-Mullen shelter in Lower Roxbury on that same cold, windy Sunday. Wearing a gray parka with the hood up to fight off the chill, she was standing in a growing line of commuters waiting for the buses at Dudley.

Compared to Tony’s experience with the 41 and 15 buses, Reis hasn’t had much trouble with transportation. She mentioned problems with traffic, but shrugged them off — she’d have the same problems if she had a car.

“Sometimes with the traffic it takes a little while to get home, but, I mean, it’s traffic,” she said. “What can you do about it? Everyone’s getting home so you’re going to have to wait.”

She also said she thinks the bus routes are better than New York City because they aren’t as long. When asked about the fare hike, she wasn’t worried because it’s not affecting the buses.

Ted Landsmark, the current director of the Dukakis Center, said the answer to that question is largely found in the MBTA itself.

“The MBTA is not a city agency,” Landsmark said. “It is a regional agency largely dominated by board members that come from primarily white areas elsewhere in the state … as a result, there may be some implicit bias that may favor some suburban white communities over inner city communities of color.” This bias causes added difficulty for the 48 percent of bus riders who are members of marginalized communities, according to the 2018 MBTA passenger survey.

However, Landsmark said that the MBTA must think like a business — it’s really expensive to build new transit. He also focused on political power: Communities of color, historically disenfranchised voters, tend to have lower voter turnout than white communities. If Roxbury had the ability to mobilize for new transit, they may be able to get some. But, it would come at a price.

“But it has to be remembered that is a double-edged sword,” Landsmark said. “When those new rail lines do come to the communities, so does gentrification.”

Elsewhere in the advocacy community, others are debating these issues as well. Jarred Johnson works for an organization called TransitMatters which works to advocate specifically for communities lacking access to transit, such as Roxbury, Dorchester and Mattapan.

“Now, you have a whole generation of young people and boomers that really value being next to the train, you see people getting pushed out,” Johnson said. “There is undeniably a marked difference in race and socioeconomic status between someone who lives along the 28 versus someone who lives in Back Bay and can take the orange line or the green line.”

Johnson’s goals at TransitMatters are varied — advocating for a night bus project to bring full late-night service to struggling communities, working toward more frequent commuter rail service on the Fairmount line, increasing the consistency of city buses in high traffic areas and more.

He said much of the organization’s work centers on what they hear from Boston residents frustrated with transit.

“People say, ‘Oh, I love the Fairmount line, but the train only comes every 40 minutes and that’s during rush hour,’” he said. “And, it’s not at all aligned to the bus schedule.”

It’s those problems, that seem little but make a huge difference for someone relying on these systems, that Johnson is so focused on solving.

“We’ve definitely heard that bus frequency is not where it needs to be,” Johnson said. “Transit planning in general — it’s really been made for someone who works 9-5.”

But actually solving that equity problem is harder than knowing it exists, even though that’s the first step. Johnson said TransitMatters focuses on community engagement as a priority.

“Improving public transit around the country almost invariably leads to gentrification,” he said. “When you make it easier for people at a distance to get to the jobs in town, you get people who are more willing to pay more. Willingness to pay more is the essence of gentrification.”

One Roxbury resident, Tarnisha Ross, said she’s seen the inequality firsthand. Ross was waiting for her bus at Dudley last Wednesday, bundled up with a Dunkin’ coffee in her hand.

“I used to live in Somerville, and I know their buses came back to back, you know. Literally, if it said 12:59, then it pulls up at 12:59,” Ross said. “I believe in a lot of predominantly white neighborhoods, they have more buses than us.”

Ross takes the 3, 47 and sometimes the 8 to get to work. She said the schedules can be inconsistent, even if people try to learn them in advance and get there on time.

“On Sundays, if you live on the Geneva Avenue route where the 19 runs, that bus doesn’t even run on Sundays because they say they don’t get enough people,” she said. “It shouldn’t matter. There’s still people over there that need transportation.”

Bill Tony, the man waiting for his bus at Dudley, is one of those people who need transportation on Sundays, since a lot of his work is Thursday through Monday.

Johnson, from TransitMatters, had one last thought about progress. He said listening to what commuters are saying is the best way to develop adequate policy.