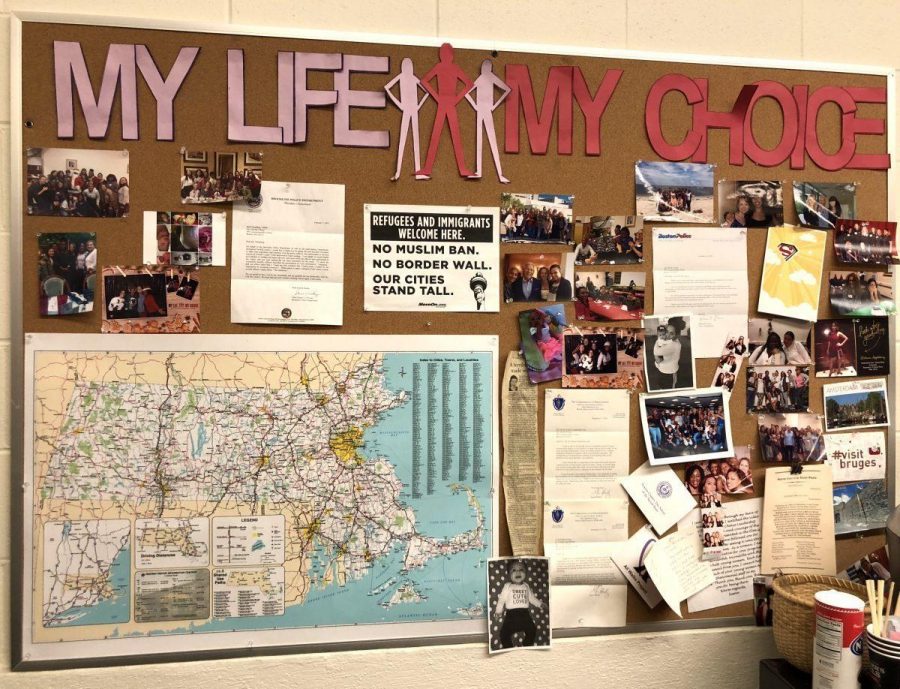 Local advocates will discuss child sex trafficking at a state-wide conference next month, but on this issue, Congress is already one piece of important legislation ahead of them.

The Massachusetts Children’s Alliance will meet for their eighth annual conference, titled “Healing, Hope and Justice: An Advanced Conversation,” on May 1, to discuss programs aimed at eliminating child sex trafficking and providing support to survivors. But Congress has already taken action against this criminal underworld, passing significant anti-trafficking legislation last month which President Trump signed on April 11.

It was following a private screening of the 2017 documentary “I Am Jane Doe,” that the Fight Online Sex Trafficking Act (FOSTA) swept through the Senate, passing with 97 votes to two.

“When you can get lawmakers to sit down in a room for 90 minutes to focus on an issue and be emotionally moved by the stories, that [is the] game changer,” said Mary Mazzio, the film’s director and a former Olympic rower. She believes the congressional screening was hugely influential in driving the new law through both houses with overwhelming, bi-partisan support – a rarity in recent months.

The bill passed the House of Representatives at the end of February, with 388 to 25 votes, before being agreed to in the Senate on March 21. It amends Section 230 of the 1996 Communications Decency Act, which had, up until now, protected internet companies from liability for third party content, even if websites were engaged in facilitating criminal conduct, including the sale of children online.

Mazzio credits the film’s voices from survivors and their families with “catalyzing awareness.” She said it was the film that handed Congress their “Houston we have a problem moment.”

Since its release in theaters on Feb. 10, 2017, “I Am Jane Doe” has moved audiences both familiar with and new to the issue, including those who will watch the documentary at the alliance’s conference at the Sheraton Hotel in Framingham next month. It has raised widespread awareness of the campaign to amend Section 230, legislation that has historically protected classified websites like Backpage and Craigslist from accountability in the courts.

While not the only website where minors are trafficked and sold for sex, Backpage is the most notorious. After Craigslist was forced to close their adult section in 2009, following public pressure and legal action by the victims and families involved in trafficking, Backpage took over as the market leader. In January 2017, a Senate subcommittee report accused Backpage of editing advertisements and coaching traffickers on how to write posts, leading to the closure of the site’s adult section. The same report revealed that, in 2011, 93 percent of Backpage’s revenue came from adult ads, including those which led to the sexual exploitation of children. Backpage was expected to make $250 million in revenue next year, that is until the website was seized by the federal government and seven of their top executives were indicted for conspiracy to facilitate prostitution on April 9.

After pursuing Backpage, protected by Section 230, through the courts for several years, “I Am Jane Doe” chronicles the struggle to bring about the legislative changes that would hold websites like Backpage accountable, change that finally came in the form of FOSTA.

It is difficult to know just how many children are trafficked in the U.S each year, but of the 25,000 runaways reported to the National Center for Missing & Exploited Children in 2017, one in seven were likely victims of child sex trafficking. Of the children trafficked online who are reported to the national center, 73 percent are bought and sold on Backpage.

READ MORE: Missing and exploited: The state of child trafficking in Massachusetts

Unlike previous films about child sex trafficking, including Nina Alvarez’s 2008 documentary about sex slavery in New York City, “Very Young Girls,” many credit the unique focus of Mazzio’s work as the driving force behind FOSTA’s passage.

“There had been lots and lots of films about trafficking, but not really specifically about American children,” said Mazzio.

Lisa Goldblatt-Grace, co-founder and executive of My Life My Choice, an advocacy group providing support for child trafficking survivors in Massachusetts, has said of “I am Jane Doe”: “ [It] pulled together things that people knew, but it also put some faces and some clarity to it in a way that once you knew you couldn’t look away. It made a very clear case that the real change that needs to happen sits in the hands of our leadership in [Washington] D.C.” 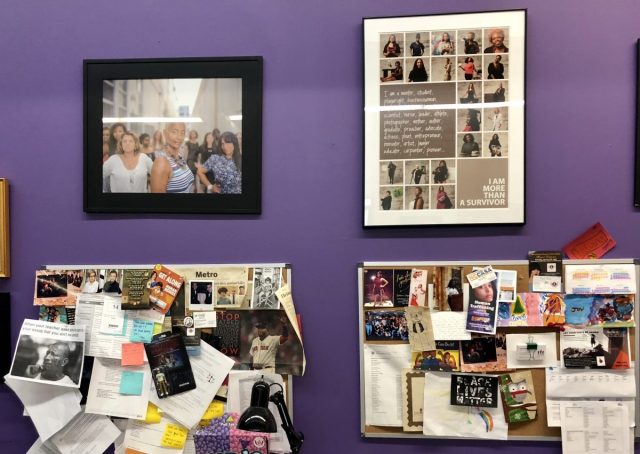 Goldblatt-Grace, who was interviewed for the documentary, directly links the passage of FOSTA to the success of “I Am Jane Doe.”

“I firmly believe that the legislation we have before us, FOSTA … would not be where it is absent this film,” said Goldblatt-Grace. She praised the film for its unusual focus on the legislative process. “In that way it’s a first of its kind.”

For Elizabeth Bouchard, the Support to End Exploitation Now (SEEN) program manager for the Children’s Advocacy Center of Suffolk County, it was not only the film’s content that shocked audiences into action. Available through a number of different streaming services, including Netflix and Amazon, “I Am Jane Doe” reached new audiences. It’s availability, Bouchard said, sets it apart, and Mazzio agreed that broadcasting on Netflix “allowed an exceptionally wide audience to see the film.”

David Tames, professor of film at Northeastern University, has noticed a “renaissance of really interesting, compelling documentaries getting reasonably widespread release,” over the last decade. Due, in part, to the democratization of distribution within the film industry, Tames also attributes the impact of “I Am Jane Doe” to its availability.

But child advocates are quick to point out that “I Am Jane Doe” does not exist in a vacuum and that FOSTA is the culmination of many years of hard work by non-profits and child support groups.

“For those of us who have done this work, the individual scenarios of those women [depicted in the film], although horrific, are not surprising,” said Tom King, executive director of the Massachusetts Children’s Alliance and host of their annual conference.

Aided by a five-year federal grant, which is due to end in 2019, programs like SEEN have provided support for survivors and educated those working with vulnerable children to spot the signs of trafficking.

Aside from non-profit groups, Ropes and Gray, a Boston-based law firm also featured in the documentary, has tirelessly supported child sex trafficking victims and worked pro-bono with many advocacy groups. The firm is currently representing three child sex trafficking survivors and their families in an ongoing court case against Backpage.

Even without this legacy of advocacy, Tames said it would be difficult to categorically prove “I Am Jane Doe” is solely responsible for FOSTA.

“It is very difficult to build cause and effect relationships when you’re talking about the impact of media because it’s an aggregate of many different conversations,” said Tames. Documentaries are a small part of the media landscape and it is difficult to separate them from all of the other TV shows, tweets, news articles and snapchats consumed daily.

Regardless of the film’s impact, the efficacy of FOSTA and its significance remain unknown. From a legal standpoint, Aaron Kellog, public relations manager for Ropes and Gray, said that they are evaluating how FOSTA will impact ongoing litigation. Due to a retroactivity clause in the new bill, old Jane Doe cases may be reopened and prosecuted, giving many hope of justice, and Ropes & Gray attorneys even more case files to manage.

Mazzio recently finished working on her next project “Little Red,” an animation film that teaches children about how to spot child sex traffickers and the manipulative tactics they use to lure victims. She shares the view of other child advocates, that there is more to be done to educate children and prevent them from falling prey to potential abusers, on and offline.

Bouchard highlights the need for safer placement of vulnerable children, within the care system and for those without appropriate support at home.

“I think we could do more to think about what placement options can best meet the needs of kids that we’re serving,” said Bouchard, who believes that tackling this issue would reduce the number of children who runaway or find themselves in unsafe situations where they can become targets for traffickers.

“I don’t think [child sex trafficking] will stop,” said King, who apologized for his cynicism. “It’s a huge win, but sadly those who are profiting off of children will find other ways of doing it. That’s where we need to remain ever vigilant,” he said.

Vigilance and determination are necessary traits for those who continue to advocate for an end to child sex trafficking in a post-“I Am Jane Doe” era, those like Goldblatt-Grace.